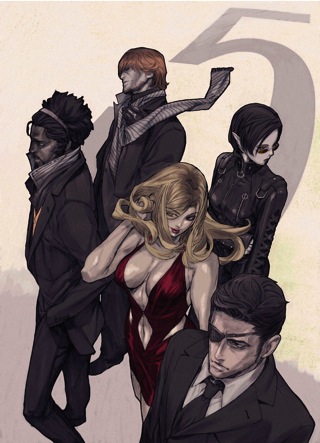 If you haven’t seen it already, stream this short trailer for the upcoming “anime” The Five Killers and prepare to be gob-smacked. First, lets just say this looks absolutely fantastic, however, a little digging will reveal that, much like last year’s (in)famous Afro Samurai, it’s being bank rolled, first and foremost, for the North American market. So, despite being directed by Tomohiro Hirata (of Trinity Blood fame) and featuring authentic Japanese character designs by the upcoming talent Shigeki Maeshima, the script is actually being penned by George Krstic (Megas XLR, Star Wars Clone Wars) and comic book writer Mark Waid.
Ultimately, this poses an interesting question – in this age of truly global collaboration, how can we define anime? Consider the strictest application of the word, the one we all presume to use – put simply, anime is animation produced in Japan. This rule, though water-tight in theory, hardly stands up when you consider much of the low-level animation is farmed out to cheap foreign neighbors (like Korea). I know that a lot of Naruto isn’t animated in Japan, but I still think of it as anime, but why?
Naruto is written by Masashi Kishimoto and he’s Japanese, so as long as the story was conceived in Japan, we can safely say it’s anime… Actually, no, Gankutsuou (Alexandre Dumas) and Romeo X Juliet (William Shakespeare) were written by famous European play rights. Now I’m confused; magically qualifying as anime has nothing to do with the physical location of animation or the nationality of the original story writers. So, truly, what the hell is anime?
Of course, being anime has nothing to do with a cliche art-style either. Experimental animation houses like Studio 4°C rarely prescribe to the typical “bug eyes, no nose” aesthetic but regardless, their work is regularly described as anime anyway. This brings me on to the final nail in the coffin, Studio 4°C’s most recent theatrical movie, Tekkon Kinkreet, was directed by Michael Arias, an American.
The conclusion is obvious. Anime is dead; or at least, what it used to mean to fans (even 10 years ago) is dead. We need a new word.