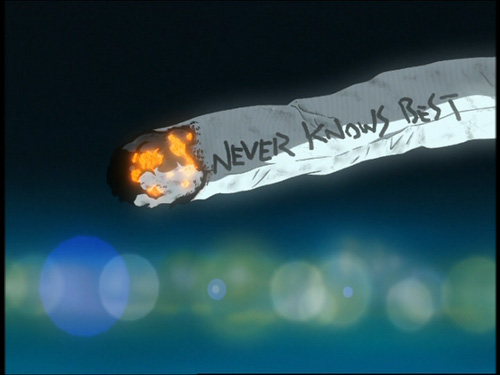 When it comes to reviewing anime, one of the most frustrating tasks can be screen-capping. Sometimes you’ll remember the cool scenes, jump straight in and snap away. Job done. But with FLCL, it’s not that easy; everything looks cool. So, when I skipped through the first two episodes, I finished up with 89 separate images! Some heartless deleting later (with emphasis on heartless), the count is down to 24. Frankly, I can’t bear to discard any more than that. Writing this now, I’m reminded of people (some of them anime fans) who will often say that watching these funny Japanese cartoons isn’t “hip”, isn’t something to be proud of, but watching this show, I’m ready to call that bull-shit. Anime can be stylish, hip, cool, fun, trendy and everything else under the sun, and guess what, FLCL is my proof.

This is the obligatory part of the review where I write a brief plot synopsis and you roll your eyes in boredom, but as FLCL is far too punk rock to bother with such standard fare, any attempt on my part to summarise the story would be utterly futile too. For what it’s worth, these few words might help: bored, head, rock, horn, girls, cigarettes, surreal, pain, mecha, pathos; repeat times infinity. If you really want to know what FLCL is, the above quote is the best possible explanation I can offer. It is an experience, on its surface illogical, yet subconsciously profound. Pure animation in the sense that, just like you can’t really relate to the pain of a gunshot wound until you’ve felt it yourself, you’ll never really understand the mad brilliance of hurricane FLCL unless you’ve seen it in motion for yourself. 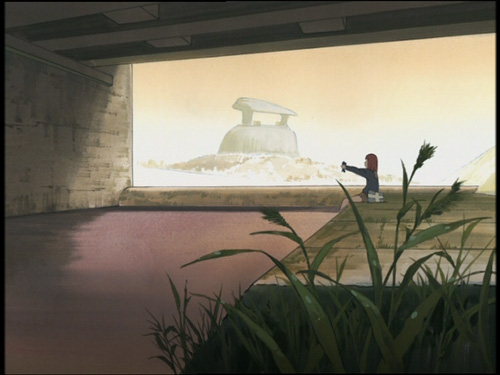 If we’re talking about motion, then we’re talking about animation. For me, this is GAINAX’s finest production, better than Evangelion, Gunbuster and even Tengen Toppa Gurren Lagann. No other animation studio in the world could come out with something like this, it’s so unique. Yoshiyuki Sadamoto’s character design is simply wonderful, but then, the entire production aesthetic is too, which feels so seamlessly tied into the hormonal narrative themes that you might get more sense out of it by watching without the dialogue. I made a point there to specifically say ‘dialogue’ because I’d hate for you to miss out on the soundtrack. You see, the music is almost entirely composed of The Pillows grungy, delirious, hot-blooded rock sound that, again, is a perfectly fitting conveyance for FLCL’s rallying cry against bored, sub-urban apathy. 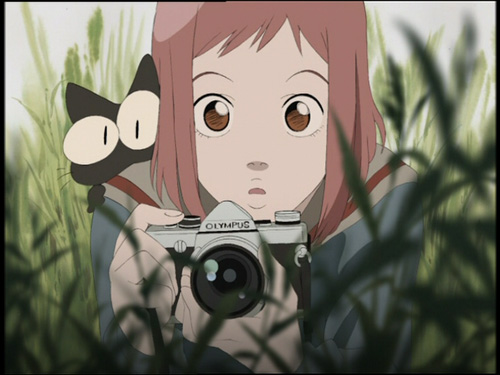 A favourite scene of mine appears in episode 2. The air-headed, pink bomb-shell Mamimi is wasting time playing with a stray kitten when something catches her eye in the golden, grassy field ahead. It’s Canti the robot wandering around aimlessly. She follows “him” until they happen across a half burnt down, old elementary school. The sky darkens with black rain clouds and hungry crows perch on the surrounding landscape as Canti climbs onto the roof and, quite literally, takes flight. It’s an amazing, baffling moment. The sun shines through the clouds as Mamimi stares on, birds aflutter, wonderstruck. Through-out this sequence, The Pillows song, “Hybrid Rainbow”, is rising in the background, the chorus hits crescendo just as Canti flies away. It’s a spine-tingling, rousing scene, seemingly random and superfluous, but completely worthwhile. 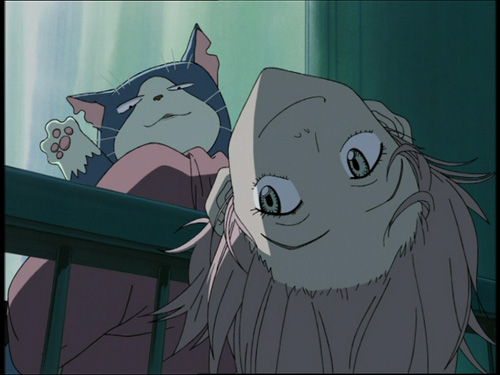 You could say FLCL depicts that painful transition between late adolescence and young adulthood; a time when you’re too old to do kid things and not old enough to do adult things. Characters, failing to understand or grasp new emotions and burgeoning sexuality, are confused and lost, as if unable to make sense of the reality that surrounds them. They can lash out, or retreat, and yet, back then, life was so colourful, new and exciting too, as if a sudden revelation could unlock a new, brilliant dimension of reality. That is, ultimately, FLCL’s crazy point of view, an unpredictable, wonderful stream of consciousness, so frenetic, surreal and fun, like stepping into a long forgotten, lost dream.