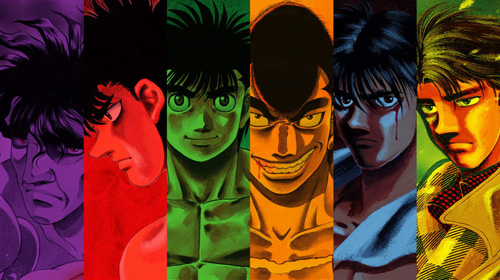 Last weekend, I caught a screening of The Wrestler and it was as great as everyone has been saying, particularly Mickey Rourke, who, in the words of my friend, contributes a “massively gutted” performance. However, I’ve always enjoyed sports drama.
And the keyword here is drama; skill, relationships, tragedy, emotion and glory. The sports element may as well be random; just pick any one from wrestling, table-tennis, baseball or boxing, it’s not as though I know anything about these sports in the first place, and it’s not as though I have to, either.
Because sports drama is all about people – watching them rise to glory or, as in Rourke‘s case, sink in to obscurity. These hardy souls are battling with themselves as much as against their opponents; they are infatuated with pipe-dreams, always striving for success and clinging to every last shred of hope. 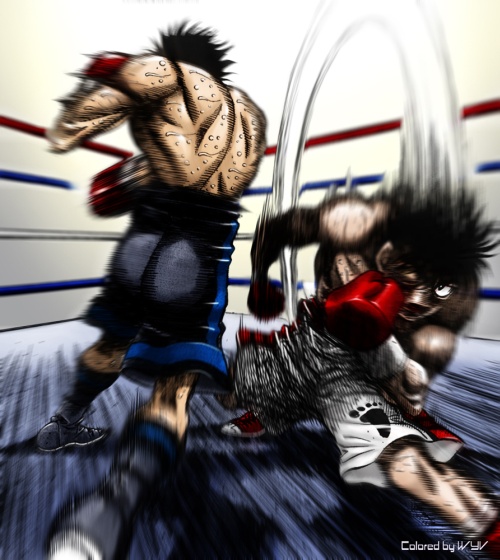 This brings me to Hajime no Ippo (also known as ‘Fighting Spirit‘). The new season is finally underway in Japan, resurrected after 7 years in anime purgatory. It is the story of Ippo Makunouchi; a young, hopeful boxer working his way up through the ranks of Japan’s obscure boxing scene. On his road to glory, Ippo meets friends and enemies alike, with his nervous smile and kind nature in-tow. Friends like Ichiro Miyata; the person Ippo admires the most.
Miyata is an elegant fighter, the golden boy of Japanese boxing, but forever haunted by the indignity of seeing his champion father destroyed in the ring many years before. He fights as if to prove his father’s doubters wrong, to regain the pride that his family lost all those years ago.
Another of Ippo’s fiercest rivals is Takeshi Sendo, also known as the “Naniwa Tiger.” His never-say-die attitude was influenced by his father’s own, a brave firefighter who died in a blaze trying to rescue others. Sendo’s two matches with Ippo could be described as the best of the first series, both are traumatic and brutal encounters between two men with so much at sake. As much as boxing is a physical sport, these are duels of emotion, with every punch being felt ten-fold by the viewer, if only because we understand just how much victory means to both men.

So, you may scoff at the formulaic concept of sports drama, may think that you can ignore anime like this because you’re not into boxing, but I’ll retort by suggesting that that is a lazy way of thinking. Like every great sports anime, Hajime no Ippo is fuelled by great characters. It is overflowing with feeling. Please don’t ignore it.