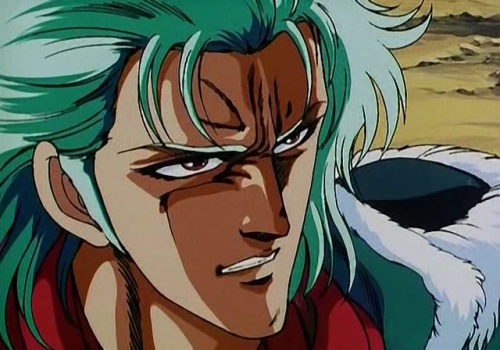 When I finished watching Legend of the Galactic Heroes late last year, I felt like I’d had my fill of sprawling eighties anime series for a fair old time to come, but fate, it seems, has long been conspiring against me.
My destiny had seven scars on his chest. A mere swipe of his hand could (and invariably, will) render his enemies violently exploded! His name is Kenshiro, Fist of the North Star!
Firstly, I must admit, catching up with Hokuto no Ken has always been a secret ambition of mine. The 1986 “manga video” was a tangible part of my early years as an anime fan and exploring this whole, bloody story for the first time is akin to understanding that cliche feeling of a ‘child-like sense of wonder’.
Let’s face it, there’s no point in even trying to be objective about this, Hokuto no Ken is far, far, far from perfect. The story is predictable, the characters’ motivations are laughably ‘basic’ (‘without wit’ may be a better description) and the aesthetic is like some inbred, mutant offspring of Viking culture and Mad Max 2. So far, so flippin’ weird, but that’s why I love it, too!
People often forget anime; time always has the last word, but it seems many still remember Hokuto no Ken, which is ironic, as it’s probably the antithesis of what many fans would today describe as good anime; the manly ying to the moe yang, perhaps.

A subtle, beautiful and moving observation of life; Kenshiro’s journey is none of these things.
In 199X, the world is decimated by nuclear war. In-lieu of modern civilization, the strongest warriors have risen up to build vast armies of mohawked thugs and conquer the world. One of the few men brave enough to retain his honor and decency in this harsh new world (as evidenced by the fact that he wears denim jeans) is our hero Kenshiro, successor to the deadly martial arts style of Hokuto Shinken. He faces many fierce adversaries on his road to nowhere, including none other than his best friend, the blonde bombshell Shin.
Before abducting Ken’s fiancee Yuria, dragging her off to his castle and basically destroying Ken’s entire life up until that point, Shin was a good old boy, really. He just had some bad ideas about love, is all, but that will hardly stop Ken from sweeping across thousands of miles of broken cities and bitter deserts in search of delicious revenge.
The thing is, Kenshiro is a vigilante. He and his friends rarely live to fight another day; each battle is to the death and the so-called hero of this story could aptly be described as a mass-murderer too, which is, I think, why Hokuto no Ken has managed to retain its edge to this very day. It’s such an extreme and morally irresponsible show that one gets a giddy, visceral thrill from watching episode after episode of brutal, bloody death. That, and I think the art (particularly the character design) is great fun.

There are many square jawed, horse riding, really tall, massively fat and fundamentally odd-looking people in this. The facial expressions are often very funny and the voice acting is so melodramatic that I can’t help but be swept away by the sheer enthusiasm of it all. Logic be damned, then, I’m really enjoying Hokuto no Ken.

Along with Ninja Scroll, I grew up watching the Fist of the North Star movie. I was attracted by the unapologetic gore but this was no mere action flick – set in a post apocalyptic world ravaged by nuclear holocaust, I felt in awe of the endlessly barren landscapes, the grandiose struggle for power between armies populated in their thousands and the colourful ways in which Kenshiro would inevitably dispatch his ever demented enemies; his battles were at once intensely personal crusades and vitally important victories for a shattered, weak civilisation. You can’t ask for much more than that.
Fist of the North Star (Hokuto no Ken) – The Legend of Raoh: Martyred Love Arc (Raoh Den Jun-ai no ShÃ…Â) is a return to those days; unpretentious, violent, fun and absurdly operatic, I absolutely loved every moment of this movie – and understand, the presentation is amazing too – Hokuto no Ken has never looked as gigantic and over the top; pyramids touch the clouds and knives of lightning rip through the star lit night as the muscle-mountains Kenshiro and Souther duke it out for the future of mankind.
This film is the first in a "pentalogy" of upcoming Hokuto no Ken features — re-animating and re-telling the cult 80s TV series. "The Legend of Raoh: Martyred Love Arc" begins by introducing us to the Hokuto universe – showing Kenshiro (as a berserk young kid) fighting in the "Nanto Temple for a test of his worthiness". Ken must defeat 10 warriors or face execution, and being a kid and all, he eventually loses to a far superior fighter by the name of ShÃ…Â«.
Recognising in Ken the potential of a great hero, ShÃ…Â« (Man of Jin-sei (benevolence star)) elects to rip out his own eyes, essentially ending his life as a martial artist, to save the kid. That’s the kind of world this is, a culture where brave warriors would feel honoured to die for a worthy cause.
Ken and his brothers grow up; Raoh, the eldest, is apparently the subject of this movie. Raoh is a conquer on a quest to rid the world of violence by force — he sits atop a massive horse while his army sweeps through countries, destroying whatever stands in its way. He is a fearsome man, but in his own way, is trying to make things better for all. The movie charts his attempts to end the evil reign of emperor Souther, but as fate would have it, Kenshiro is still the undoubted hero of the piece.
There is no point in approaching Fist of the North Star if you are looking for a completely serious, dead pan action movie. It has always been so over the top, melodramatic and unashamedly macho. Imagine a bastard child spawned from the collective talents of Bruce Lee, Arnold Schwarzenegger and Mad Max. If you spurn that pretension of sophistication, you will love this film; a beautifully stupid, deliciously melodramatic and action packed romp through war torn countries where the heroes are sometimes as bad as the villains.