END_OF_DOCUMENT_TOKEN_TO_BE_REPLACED

I’ve been an anime fan for a long time. At 22, the portion of my life in which I’ve been a fan is already half of that; and the period of time in which I’d been exposed to anime is closer to three-quarters that timespan. As such, good titles often fall by the wayside.Such was the case with Jin-Roh: The Wolf Brigade. Produced in 1998, it was relatively new when I was first getting regular access to anime. Needless to say, at 11, dubs of Sailor Moon and Pokemon were infinitely more interesting. And so, without ever making it onto so much as a To-watch list, Jin-Roh left my consciousness for the next nine years. And like all good things, it was not only worth the wait, but indeed, a wait I needed. I don’t think I could have appreciated the movie to the extent that I did even five years ago, let alone ten.

Though he had little to do besides write the screenplay, Mamoru Oshii‘s touch is evident throughout Jin-Roh: The Wolf Brigade. The movie continually threatens to pull the rug out from under your feet, all while providing a structure as organized as latticework. Directed by Oshii’s right-hand man and key animator, Hiroyuki Okiura (after he apparently kicked up a fuss about Oishii‘s handling of some scenes during Ghost in the Shell!) the film begins with a death: a “little red riding hood” delivering bombs to a resistance faction. What follows is a multifaceted account of a country, a man, and an organization. Jin-Roh is a dark film, but one continually punctuated by the light from molotov cocktails. Something’s better than nothing, I suppose.

END_OF_DOCUMENT_TOKEN_TO_BE_REPLACED 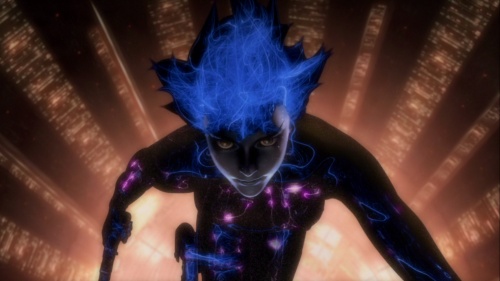