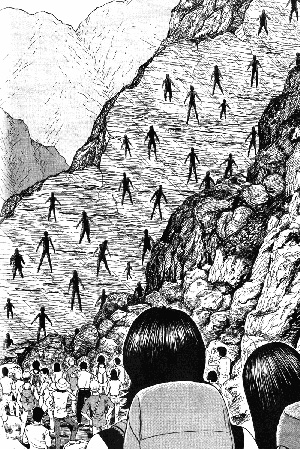 Halloween is fast approaching and it’s time to indulge in some frightful Japanese horror. Sadly, it’s not a genre that translates well to anime and manga, but having recently discovered the abnormal works of manga-ka Junji Ito, there may well be hope for us yet. This time I’m talking about the claustrophobic “Enigma of Amigara Fault”; a remarkable 30-page short that has abducted my thoughts since falling victim to its spell last night.

The ambiguous story begins as an earthquake scythes open the titular Amigara Fault; a gigantic rock riddled with human shaped caves. Nervous people from all over Japan are inexplicably drawn to the landmark, haunted by nightmares and convinced they have recognized individual caverns that perfectly match their own unique body shapes.

Amidst the anxious crowds are curious scientists trying to explain away this baffling enigma, as one by one, and despite their obvious panic, the attracted people can’t help but enter their caves and eventually, completely disappear into the darkness. All rescue attempts fail after 5 metres and given the perfect shape of each hole, it’s completely impossible to turn around, so despite being overcome with a palpable sense of anxiety, confinement and enclosure, the organic victims can only hobble forwards, onwards into the twisting Amigara Fault, as its shaped caverns ever-so gradually distort, shrink and stretch into deformed positions.

As if you couldn’t tell by reading the above summary, “The Enigma of Amigara Fault” is a striking and bizarre short story, regularly playing on our aversion to and fascination with the unknown. Ito immediately establishes an air-tight sense of claustrophobia, allowing the readers imagination to conjure an unexplained and obscure power that’s sadistically pulling these depressed people towards their inescapable and lonely fate. It’s impossible not to be fascinated by the mystery of the fault as we’re lured into a disturbing finale that you won’t forget for a very long time.

Its been a while readers, 7 days to be precise, and as we all know, 7 days on internet may as well be a lifetime. I won’t labor you with the details, but suffice to say that this gradual slow down in blogging is sadly down to cliche reasons; I have found a new job that forces me awake by 6:30AM- an ungodly and surreal time to be conscious when to my horror even the moon is still mockingly pinned up in the night sky.
Being too tired to watch much anime I’ve still found the time to maintain a heathly staple of Enel-flavoured One Piece and even discover a brand spanking new manga series to read; Bokurano.
I’m not a regular manga reader by any means, but there were a few things that forced me into checking this out – an anime adaptation has just been announced and will be directed by Studio Ghibli’s up and coming Hiroyuki “The Cat Returns” Morita, further more it’s a story penned by Mohiro Kitoh; the man responsible for inflicting Shadow Star Narutaru on unsuspecting Pokemon fans – in Kitoh’s Narutaru, the Pokemon kill, are killed and torture their innocent trainers; in other words, the author is pretty twisted, unpredictable and has a real nasty streak. By now you should have picked up that I enjoy horror.

Bokurano continues his favoured trend of throwing kids into bizarre and horrific situations. The story is basically that 14 children, who think they are simply signing up for an elaborate video game, naievely agreeing to protect the Earth against a force of invading aliens. In these regards Bokurano is very similiar to Neon Genesis Evangelion; the aliens, who attack one by one, are giant monsters with extremely variable fighting styles. The kids fight in a giant robot.
Set against what they at first brush off as simply a game, the 14 children begin to die off either in battle or straight after. Then once the fighting is finished, they return to their every day lives to face up to devestation left behind; in one such city-centred clash, 40,000 civilians were killed (most likely squished) in the carnage.
Ultimately the kids are going into each battle knowing that one of them will die and that along the way thousands of innocents will perish too – if they refuse to fight, the world will end. As they say – no pain, no gain.
From the very first few pages I’ve been in love with Bokurano. At once a heart breaking drama and compelling sci-fi mystery, Mohiro Kitoh’s refusal to pull punches makes this a shocking and captivating read that gets better with every chapter. Indeed it is giant robot manga, but given its ultra realistic take on both the characters and the consequences of giant mecha combat, Bokurano feels fresh and exciting. It will be a massive hit as an anime series, so get in now on the ground floor and discover Kitoh’s twisted drama nice and early, I’m looking forward to be able to say “the manga is better”.

Anime or manga, one is inevitably better than the other – whether it’s just another case of elitism or not, you can always bet on the jumped up manga fans hating the anime adaptations of their favourite stories. This is because the voices you hear in your head will always sound better in comparison with the efforts of some cheap hack actor, because when reading that “damn slow” story can move as fast as you turn the page (in other words – running times are for losers).
Gonzo’s Welcome to the NHK! was an inevitable travesty in the eyes of the existing manga fans. But it is a train wreck that never happened; of the 11 episodes I’ve seen, this has been an outstanding and unique series, veering from bizarre surrealism to painful reality in an exciting matter of minutes. The characters – and especially Satou – are disgustingly sympathetic personalities, shining in their moments of disdainful human vulnerability. I haven’t read the manga – so my opinions aren’t tainted with deluded expectations based on art and imagination. But I can say that out of everything I’m following at the moment, Welcome to the NHK! is the one series I’ll often watch the same day it’s downloaded.
Can manga ever be compared with anime? Can the personal experiences and emotions felt reading a “comic” be judged against sitting through a TV series? Clearly not – film is by and large a passive journey, a voyeuristic indulgence, but reading invites imagination, essentially the reader will often find himself at the centre of that story, able to invent and fill in gaps for himself. Given this tight personal attachment, a film can never be compared with or subsequently become superior to its written source material and it’s unfair for the so called fans to expect their personal standards – inevitably set as high as possible – to be met by another mere individual. Welcome to the NHK! was not directed by god, so it’s not tailored to your imagination, but it’s a fine, thought provoking and entertaining watch. Enjoy it, anime fans!

In a dilapidated dystopian hell hole, gruesome mutants stalk the shadows of a hulking city, jumping from building to building, murdering and feeding on humans by the dozen. Amidst the hopeless terror of life in Abara, one man dares to avenge the weak.
Abara is one of Tsutomu Nihei’s newest stories; famed for his downcast, vast science fiction series Blame!, Nihei is a manga-ka with exceptional drawing talent. Although his gothic style won’t be for everyone, I don’t think I’ve ever read a manga series that even comes close to replicating his eye for vast, sky scrapping architecture and nightmarish science fiction. Nihei’s work isn’t particularly notable for its empathic characters or moving drama, but he clearly and enthusiastically expresses himself though the endless, gigantic artificial landscapes, in which his characters live, breathe and murder. The reader is soon immersed and gasping for breath in a claustrophobic world over flowing with terrifying monsters and endless levels of metallic, soulless rooms.
Of the three chapters I’ve read so far, Abara is shaping up nicely but perhaps retredding old ground for Nihei. Humans and technology have again collided in Abara, and again this gives rise to some gruesome, blood-thirsty villains. Between your cliche warring government factions (police versus the “special ops”) and uncensored human slaughter, the hero of Abara is a silent assassin, uttering no more than a few grunts before violently driving his ugly adversaries through high buildings and rooftops.
The artwork is, as you would expect from Nihei, the real selling point. Abara is not set in a sky less complex like Blame!, but its world is just as dirty, sprawling and artificial. The character designs are all unique and often capture a gruesome blend of twisted flesh and dark, bone-crunching technology.

The first three chapters of Abara are moody, violent and atmospheric, leaving little room for those weak of heart.