I’ve been reading a lot of manga lately. In the past, I’d go through brief fits of reading the stuff, but it always felt temporary, like a fling while my romance with anime hit the buffers. This time, it’s totally different; I’m ready to devour as much as I can find.
By and large, anime is defined by its limitations; it only looks as good as the money spent on it, but manga is typically drawn by one talented artist; someone with a consistent vision, capable of imagining a fantastic landscape without ever needing to worry about budgets and frame-rates. It’s an untainted, purer style of story-telling, burdened only by the singular abilities of its author.

With my above enthusiasm in-tow, the first stopping point on this fresh journey into the black/white country of comics was always clear; Uzumaki by horror maven Junji Ito. Given I’m still reeling in claustrophobia thanks to his deliciously weird short-story “The Enigma of Amigara Fault“, the idea of slipping into his most acclaimed work to date was an ambition I’ve held for many months.

Uzumaki is the Japanese word for “spiral”. If you know your anime, it will immediately conjure up two obvious references; the main character of Naruto is named “Uzumaki Naruto” and, of course, spirals (and anti-spirals) represent living energy, perhaps even the soul itself, in the excellent Gurren Lagann. I’m not sure why this symbol in particular seems so prevalent in Japanese culture, but Ito’s sinister ideas are quite persuasive. Spirals are obsession.

The dread conjured by completing Uzumaki was similar to the fright I felt when reading of Africa’s army ants. These aggressive colonies, which number in the millions, are constantly on the move. They form a “living architecture”, using their own bodies to build bridges and protective walls against the ravages of the African climate. They feed on almost anything by hunting en-mass, crawling over their prey in their millions and stripping it to the bone; even animals as big as horses have fell victim. Just reading about them, I’m disturbed by their unrelenting aggression and ambiguous intelligence. There is no point in trying to understand their intentions, it’s simply a case of running for your dear life, and that’s Uzumaki in a nut-shell too. A town haunted by a faceless, creeping, crawling malevolence, an unfathomable, undiscriminating curse hell-bent on the total destruction of every man, woman and child.

Beginning in a fine fashion then, the first chapter is brilliantly weird. To the utter bemusement of his relatively normal family, a typical Japanese salary-man is suddenly obsessed with spirals; at first he’s satisfied by merely staring into a snail’s shell, but as his mind gradually unhinges, he starts experimenting with his body too. He doesn’t simply admire the spiral, he wants to become one.
The first two volumes (out of three) are fairly episodic, making up a series of bizarre encounters with the spiral obsession, most of which range from the darkly comic to out-right disgusting. When I say the latter, I’m talking about cannibalistic pregnant women and insane doctors feeding their hungry patients umbilical cords and placenta that, for whatever reason, take root and grow when chopped from newly-born babies; and there’s more, but I’ll leave the rest to your imagination. All of the horror in Uzumaki is, as is Ito’s signature style, sticky and organic; we’re supposed to be sickened, disturbed and freaked by the way he twists and contorts the apparently flexible human body to new extremes. 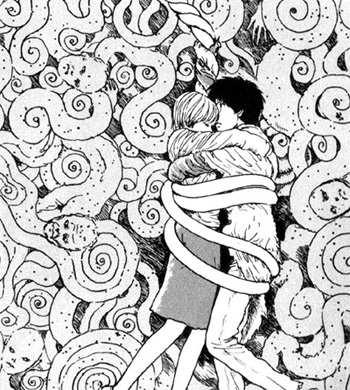 It would be fair to say that I enjoyed the first two volumes, but they were merely fun for the sake of horror; I felt nothing for the characters, and the thread-bare plot offered little more than an uneven patch-work of horrific adventures. That is to say, I wasn’t heading into the third (and final) volume over-flowing with enthusiasm, yet it’s a quite remarkable end.

The entire town, now well beyond rescue, has been completely smashed by the dreaded curse. The last few survivors are starved and confused, tightly grouped together in small wooden huts, hiding from the many terrors roaming the streets outside, including tribes of cruel children capable of riding giant twisters through the wretched remains of modern civilisation. These last few chapters are post-apocalyptic, bereft of hope and beautiful; the landscape is desolate and open, forcing a real fear of loneliness on this reader that’s far more potent than the cheap thrills of earlier volumes.

Ito’s true strength isn’t necessarily his detailed depictions of gore, but his manipulation of human nature, the way he exploits our physical relationship with life and our worries of the unknown; he knows what’s lurking in the darkest caverns of reality, willing to fathom the moon-lit shadows being cast across our bedroom walls.