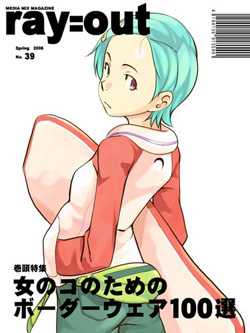 In my previous E7 article, “Discovering Eureka Seven; subtext and pop culture“, I briefly touched on the pervasive themes of war laced through out the series, going so far as to compare it to Akitaro Daichi’s post-apocalyptic (underrated) masterpiece “Now and Then, Here and There“.
As a genre, we’re conditioned to believe animation is for kids, hence, it’s a medium synomonous with innocence. Even as a seasoned fan and knowing full well a lot of anime is intended for adult eyes too, I expect a certain degree of naive optimism. It’s the same with Eureka Seven; we’re seeing this world (largely) from the perspective of two adolescent protagonists, and because they aren’t jaded and don’t understand the reasoning of adults, they have a clear view of life; enemy or not – they see blood, they jump. Eureka Seven explores the exploitation of innocence, showing how children can be used as fearsome weapons simply because they don’t understand the impact of their actions. Up until a certain age, I suppose we all view life as a game to be won; Renton’s happy “playing mecha” until he discovers the mashed up remains of one of his opponents.
Mechas role in dehumanisation
In Eureka Seven, the mecha have two arms, two legs and “bleed” red engine fuel, so it’s fair to assume that they have been shaped in the image of man. Except they aren’t human, they aren’t alive and they don’t feel pain, therefore its just-fine to dismember them limb by limb. Forget the pilots inside, it’s okay to kill something provided it doesn’t look or seem alive.
In the previous article I cited an interview with Dai Sato, in which he reveals one of the major influences behind the war-torn landscape of Eureka Seven was Tibet’s national policy of allowing young children to join the military. The ultimate concern is that if a child is brutally conditioned to believe their targets are “sub-human”, any kind of “normal” moral development is thrown out the window and we end up with a bunch of care-free mass murderers on our hands. Obviously the mecha bleeding, as any “normal person” would, is an ironic jab at the militaries collective attempts to dehumanise the enemy.
Moral horror lies beneath the veneer of innocence
As noted above, we are seeing the world through the eyes of an innocent boy like Renton. Everything looks so exciting and new to him; piloting a mecha is like a dream come true. Of course, such a personal high is violently contrasted with the harsh and disturbing reality of Gekkostate’s true position as airborne terrorists. This shift in mood and the gradual realisation of moral guilt is best emphasized in the changing face of Eureka herself, originally an attractive and healthy looking young girl but now scarred and fragile. No doubt, this sense of exploitation and loss of innocence is the most chilling quality at the heart of E7’s allegoric narrative.
With all that said, one should keep in mind that this is essentially a kids TV show. Characters in E7 still find the time to smile, joke around and be stupid. In reality, that prevalent and undying sense of optimism and hope is rare and extremely valuable.
(NOTE: This was written having seen up to the 22nd episode of Eureka Seven, I’m still enjoying it just as much!)

I was not aware of the Tibet connection and the issue of chid soliders at all – perhaps it’s because we’re so used to seeing youngsters pilot mecha in anime shows! It is always interesting to show the consequences of mecha combat though, especially since it adds an element of realism to a situation that is by nature unrealistic (Gasaraki is the most ‘true to life’ portrayal of robots in warfare I’ve seen, just for the record).
I’ve noticed a similar effect in Hiroyuki Morita’s Bokurano. The heroes are initially led to believe that piloting the big shiny robot is just a game; it is only after their first battle that they see the after-effects, which are tragically counted in human lives. E7 does have that ‘fun’ side you mentioned though (an aspect which Bokurano really seems to lack!). Although I expect to see it diminish as the episodes progress, it makes the serious themes much easier to digest.

I noticed maybe you still havent realized about the LFOs? You referred to the Red liquid as engine fuel in your writeup (very good writeup btw, you’re hitting on the major points on why I loved the series so much, even early on) Looking forward to your reaction to whats coming up 🙂
I advise you to rewatch or peruse through episode 18 again however, as it pertains to the LFOs origin.

Many of the characters in anime are young because the demographic of most shows encompass a young age group, that’s a given. Although, having young characters provides a convenient plot tool as evidenced by the nature of E7’s characters. If they had been older their naivetÃ© wouldn’t play so well.
We see it as a novelty of the specific art form that we follow. However, youth on the battlefield is not new or even uncommon. One only has to look at the conflicts in some regions of Africa for a current example. With this particular aspect one could say that truth is stranger and far more brutal than fiction.

@Martin: The whole Tibet thing is a fairly interesting connection. The interview with Dai Sato provides an unforeseen insight into the way he’s crafted the scenario, splicing together all these different elements of world culture – there are the obvious technoelectronica references (an impromptu rave is sparked to life during episode 22!) but the narrative seems to be extremely allegorical too.
And yup, I agree there are some definite similarities to Bokurano. Though with that show, the mecha action is almost an after thought compared to the foreboding, almost heart breaking characterization.
@S.A.: I’m kind of aware the LFOs are actually "alive", or rather, living organisms from the "eighth dimension". I’m not sure if that applies to the KLFs as well though? To be honest I’m a little hazy on that whole aspect of E7 right now, must rewatch!
@j.valdez: "With this particular aspect one could say that truth is stranger and far more brutal than fiction." That’s for sure, or rather "Now and Then, Here and There" along with "Grave of the Fireflies" did that. I do admire and really enjoy Eureka Seven if just for that innocent naivety; like how Renton or Eureka can just strap on a parachute and surf their way through the clouds!

I wouldn’t say "Now and Then, Here and There" is underrated. I think it’s just underexposed. Most people who’ve seen say it’s one of their favourites. It’s certainly one of mine.

It’s theEnd of the world! Reflecting on Eureka Seven!…
It’s taken me two or three months, but today I finally finished watching Eureka Seven. Like whenever I finish reading a book or watching a long TV series, I feel like I’ve accomplished something big, but at the same time, I’ve grown attached to t…

[…] think Bateszi’s entry about dehumanisation in Eureka Seven was the first place I heard of Now and Then, and […]

Bateszi,
Your review and analysis of Eureka Seven, is by far the most well thought out and presented I have seen anywhere so far.
I absolutely loved this anime, not because of it’s excellent script work, and not even for its amazing cinematic artwork, nor was it even for the well rounded characters that worked around each other throughout the whole series.
It is firstly due to what is shown to the audience at first subversively, but then becomea such a larger part of the anime itself. The dehumanization of ones enemies, or just people or things in general. I love how Eureka Seven lets the viewer realize these important elements and tugs and even at times screams at ones emotions and Moral alarm.
In short This post is really about my appreciation of your review on this topic on this anime, and how well I think you pinned it!
It is good to know there are others out there that can see the interwoven and subtle messages left by these amazing writers.

I greatly applaud your expert reasoning. However, I see a few errors that I want to point out.
In E7 context, the mecha are actually ‘alive’, similar to the EVA’s. The LFO’s are based around biological bodies.
As for the interpretation, I do not believe that the creators intended for the audience to ‘understand’ the messages about Tibet, dehumanization, and such presented. No, E7’s demographic would not understand such concepts. The concept of ‘innocence’ is to be disputed as well. The wonderful thing about E7 is it’s superb charcter development. I wouldn’t exactly call them naive, but rather, they resemble us. Their actions resemble what actual people would do in such situations. And that is the show’s appeal.

hey bateszi, nice insight on the role of mecha in dehumanising the enemy. i think, not just for Renton, but it also dehumanises enemies for us as audience, as we don’t really feel sad for the poor suckers inside the robots. I guess we don’t want kids to cry while watching cartoon.
I just wanted to give a heads up on that interview you’ve linked to, since it’s dead! I’m guessing you wanted this article? Great read I must say, thanks!
ttp://www.japansociety.org/resources/content/2/0/5/4/documents/sato_mcgray%20interview.pdf
(put ‘h’ in front of ‘ttp://’ to complete =D)

Thanks, gaguri. Updated the link accordingly, during which time, I went back and read the whole post, expecting to be embarrassed, but damn, I’m surprised! It’s so analytical and full of interpretation that reading it filled me with a sense of pride I hardly ever get from my own posts. I hope that doesn’t sound arrogant, I’m just totally shocked I was ever capable of creating something like this, and in 2007 no less. Ta again for proving the new link.