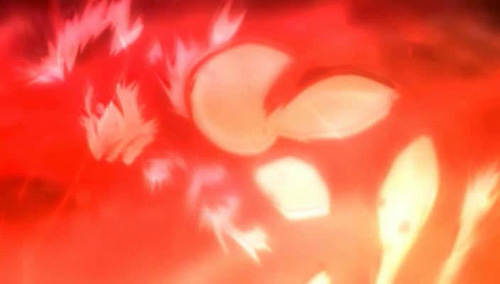 I’m really digging Claymore at the moment and each episode is ending on the kind of gut-wrenching cliff hanger that so tempts me to gorge on manga spoilers. Episode 21 is no different; Ligardes is one of the coolest awakened beings yet — his intimidating part-lion transformation perfectly emphasizes his quite unfathomable strength and speed; he radiates killer-instinct and I haven’t a clue how anyone, including Claire, can escape his relentless lust for blood.
My main problem with the series is that it hasn’t been great at building sympathetic characters but after episode 20, I was totally rooting for Undine; at first she seemed like a heartless bitch, but it turned out her abrasive personality and pumped up muscles were all superficial fronts. The scene of her cowering in the corner; shivering, crying and completely exposed immediately transformed her personality. That she dies in episode 21; killed so quickly, no fan-fare, just death, felt shocking and disappointing, but also made it clear that this ain’t no picnic. How can anyone beat Ligardes?
I must be one of the few people to like Raki. I like that he’s weak, but willing to learn. I hope he becomes strong or at least capable of cutting down the generic yoma. I’m not sure what to make of his contact with Isely and Pricilla; why haven’t they killed him? I sense they are more than just superficial bad guys and knowing what monsterous power lurks beneath their skin, I’m quite fascinated by their passive attitudes towards him.

I loved the build up to the second wave of attacks on Pieta. The silence of the Claymores as they sensed demonic energy on the horizon; the sound of the wind and the blizzard while the awakened beings howl in excitement of battle and then the reverberating bass of their gigantic foot-steps as they near their prey — it’s almost Lords of the Rings-esque, such is the tension in the air. In this moment you can’t help but pity Claire and co., they may well be doomed.

Claymore is my favorite anime right now by far, despite some people denouncing it as formulatic, or even as a ‘Berserk rip-off’ (dunno how people arrived at that one). One of my favorite things about the anime apart from the beautifull animation, is the soundtrack.
I strongly suggest not reading the manga until the anime is finished, because the anime has departed from the manga in the last couple of episodes, and you may not like the differences. I regret reading the manga before watching the anime for that reason.
Also agree with what you said about it being almost Lord of the Rings – infact the anime has quite a Dungeons and Dragons type feel to it – its like some anime version of the Forgotton Realms 🙂

“Ligardes is one of the coolest awakened beings yet”, best looking one yet, too. ;D I actually thought that a lot of the characters were too sympathetic. Undine was a character I had trouble finding sympathy for. Undine’s predicament didn’t really grab me, not even when she died, whereas Ophelia’s death really struck a nerve. Ophelia, now there’s a sympathetic character. It might be a bit weird, but I’m enjoying Ligardes’ (what exactly is the guy’s name? Rigald? Rigardo? Ligardes? O_o?!) killing spree of sorts. Hehe, ^^;…I’m also under the impression that Easley’s keeping Raki alive because Priscilla likes him, for God knows what reason. Something might happen between Raki and Priscilla, that’s how I read it. XD

@Karl: Not sure if you’re being sarcastic or not about the similarities to Berserk, but personally, the more I see of Claymore, the more obvious it’s influence has become. In terms of pure aesthetics, Isely is the spitting image of Griffith. In the manga, Griffith’s right-hand man becomes Zodd – who just so happens to look a lot like the transformed Ligardes, who is the right-hand man of Isely! 🙂 Also, Berserk has its army of apostles while Claymore has its army of awakened beings. The story itself is quite different, but there are some clear points of comparison too.
And I’m interested to read the manga but as you suggested, I may well wait until the anime finishes. Some of the manga illustrations I’ve seen look fantastic. Also, I’ve no idea how it will be wrapped up in time so I’m expecting a second season in due course. I mean, the “Dwellers of the Deep”, I can’t imagine all of that will be wrapped up in the next 5 episodes.
@Xerox: I’m using Wikipedia for character names, so hopefully Ligardes is right 🙂 Anyway, its interesting you should mention Ophelia because I was contrasting her with Undine last night. I never really felt for her character because she was a blood thirsty nut case! That said, her end was quite poignant and dignified, and perhaps signals the point I started really loving the story.

Nah, its not that I was being sarcastic, but rather there are people out there who say its a ‘rip-off’, rather than ‘inspired by’ – like the Ligardes thing was more of a tribute to Zodd I thought, and as much as Claymore is inspired by Berserk, it isnt some poor clone like some people on the forums have been trying to suggest 🙂 I really hope they do a second season, but with anime, you never know.

Good thing you didn’t praise the scene where Raki finds out about Priscilla being an Awakened One, because it was an anime-exclusive scene I found horribly detracting from the mood of the original. The best of the Ligardes fight is yet to come, hopefully within the next episode if they don’t drag all of it out too much. It should be epic.

Detracting in what way? I thought it was fairly interesting in the sense that it suggests Priscilla has retained fragments of her humanity; it’s probably the only weakness Claire can use to defeat Priscilla in the finale.

Actually I gotta agree with Owen, I felt the same way after reading the manga, which is why I so strongly advised against it, but he has given away one of the major 🙂

I’m one of those who started watching claymore because heard it was like berserk. While I enjoy it, I think it could use a better background music, those monsters just doesn’t feel as evil as zodd or those who appeared during the eclipse. And I also had to overlook a few very cheap level ups of Clair so far, not to mention the ssj glow appeared during the first fight against Ophelia 🙂

Ooh gosh i just wrote a big comment and as soon as i hit post it came up blank! Please tell me it worked properly? I do not want to sumit it again if i dont have to! Either the blog bugged out or i am an idiot, the latter doesnt surprise me lol.

Good Morning just thought i will let you know i had a issue with this blog appearing frozen also. Must be monkeys in the system.

Hi guys, sorry about that. I’m not sure what happened but I just tried submitting some fairly long comments and it seems fine to me; perhaps these were random server issues? I’ll keep an eye on it.
@Fuzu – Sorry, it looks like your original comment is in internet heaven 🙁