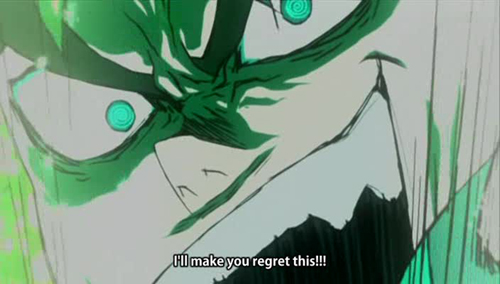 I’ve always found it hard to write about Gurren Lagann. Any attempt at coherent bloggage is foiled simply because I like it too much; it’s just a quivering mass of animated awesome. Yet come every Monday and jaw on the floor after every single episode, I’ve been fighting that nagging feeling saying it’s my duty as an anime blogger to write about this show. It’s a disservice to myself and to you, dear reader, because while I’ve tried to keep a lid on it, Gurren Lagann just keeps getting better, and right now I’m oh so close to claiming it as my favourite anime of all time. So, pulsing with spiral energy, mine rippling rantage on episode the 25th begins.
Yoko’s curse & Kitan’s sacrifice
After the blatant foreshadowing of the last couple episodes, there was a clear inevitability to Kitan hooking up with Yoko. Even still, the surprise of the “first kiss” was a great moment. Passionate, romantic and tinged with an understanding of impending tragedy, Yoko’s knowing look almost immediately harkens back to Kamina’s last few moments and sees Kitan overflowing with the brash confidence of a man with a future to protect.
“Kill ’em all”
Kitan greets his demise with a devilish smile slapped across his pointed face, savouring his last few moments of epic sacrifice with no regrets; knowing that he’s risked it all for his friends. And though his death was an admirable feat, I’m slightly bothered by these kamikaze attacks that see many secondary characters almost welcoming death for the greater good. For a country so entrenched with ritual suicide, I suppose it’s a distinctly Japanese style of story telling that lends itself dramatic tales of brave warriors, yet I’m feeling almost disturbed by the suggestion that suicide is okay when used as a last ditch means of forging a better future. 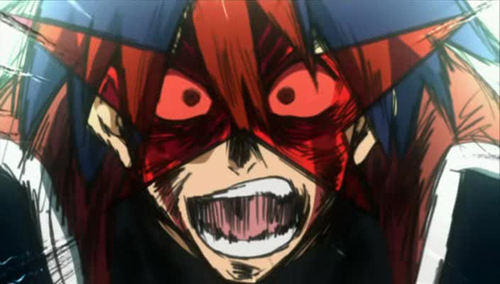 Adrenaline rush
Just this evening, I’ve replayed the last five minutes multiple times. It gets better every time, the shock of the kiss, the tragedy of the sacrifice, the moment Simon shouts “transform” with Viral replying “I’ve been waiting for those words”, the swirling soundtrack, rising, it’s just constantly ascending. Simon’s goggles inexplicably morphing into Kamina style shades, it’s totally illogical, yet it totally resonates on such a base emotional level. By the end, things are so pumped up and we’re left hanging for another week. More, MORe, MORE!

13 replies on “I Accept Your Dying Wish! Gurren Lagann 25”

Oh man, I near shed tears. You are right, MORE!!
Poor Yoko…

dude… are you seriously contemplating calling this ur favorite anime of all time???? wow…. i really have to sit down and watch this then. i really hope it lives up to all the hype. how many eps left?? so i can start the marathon.

Yoko is like Cleopatra, huh. Women who have twice picked the wrong (or rather the dying) guys.

@Runningkid: Only two episodes left… I’m looking forward to sitting through the whole series once it’s finally finished.
@kauldron26: According to Wikipedia, there are two episodes left. Also, I don’t want to build up your expectations by hyping Gurren Lagann beyond its actual quality. Just try to approach with an open mind and I’m sure you’ll love it. Don’t expect anything serious or realistic like Bebop, it’s closer in style to FLCL and Giant Robo; pulpy, colorful and illogical fun. As for whether or not it’s my favourite anime of all time, well, sometimes I say these things in the heat of the moment under the influence of a great episode. Right now I probably have four all time favorites – Berserk, Cowboy Bebop, Gurren Lagann and One Piece. They aren’t necessarily the greatest anime ever made, they are just the four series that seem to resonate with me the most.
@Sasa: Yeah, I’m sure she’s getting kinda paranoid with her choices, not to mention the fear felt by the guys she falls for; no doubt they’ll be thinking they’re next for the chopping block!

I managed a one liner about episode twenty five and titled it episode twenty four. I was just so blown away by everything. Jesus, if this is episode twenty five…what’s twenty six and twenty seven going to be like?
Kittan made me cry, why does every character I start liking die two episodes later!? T__T!
More is possibly the only thing left to say, because Gurren Lagann is the only reason I have left to live.

@Xerox: When it comes to Gurren, I kinda have to impulse just to take screen-caps, write a one liner and leave it at that. It’s really a series you have to feel rather than think about. However, now I’m going to try and make the effort to write a bit more about the series before it finishes, if just because I want to be able to look back on my reactions a couple of years from now. Like I regret not blogging when stuff like Gankutsuou and Planetes was airing, I want to have some records of my thoughts when Gurren Lagann was airing 🙂
Finally, Xerox, I know you were probably just being melodramatic but I’m sure you have more to live for than just this series.

You know, to tell you the truth, I’ve been getting a little indifferent about the last few eps of Gurren Lagann. I know its a one season series, so maybe they can’t spend as much time explaining the mechanics of the world of the Spiral/anti-Spiral conflict. But nonetheless, the show hit the implausibility mark for me when planet-sized objects started transforming on Simon’s godlike spirit force. It’s just not something I feel like mecha shows can convey very well, all of the power-ups that come with the typical shounen show.
But at least, Gurren Lagann makes all of its characters interesting. Often to the point were some of those guys will rub you the wrong way, which is fun it its own right. A few episodes of GL will stand far above the rest. This is probably one of them. The reason for that, for me anyways, is seeing all of those sacrifices. When it verged on becoming comical and fluffy, they always put some wrench in the way. It added the necessary weight for me to continue watching it and being entertained. Nice post.

@Dan: Yup, I’ve noticed how a lot of people seem to be hung up on Gurren’s lack of logical explanations for the crazy power leaps. For me, it’s not so much an issue, after first few episodes (especially when Kamina and Simon merged their mecha for the first time; they just luck out after Kamina drives Simon’s robot into the top of Viral’s old Ganmen) it became clear there was no real attempt to convey logic, so I just go with the flow and take the plot on more philosophical, symbolic terms ala FLCL.
I liked your comment about the fine balance between the comedy/bizarreness and the heavy drama. In this way it reminds me of One Piece, it can be funny and emotional without feeling forced. As for the “interesting” characters, I wish they’d blow Attenborough out of the god-damned air-lock 🙂

bateszi in regards to ur poll, big o has its moments, but there is absolutely no character development whatsoever, in anyway shape or form. it is pure eye candy. great, really great animation, quasi interesting story. pure eye candy. im all for GITS 2 or skullman, but i’d say skullman because u’d power thru it in a couple of hours. im really curious to see what u think of it. its very very very different. hehe thats the only way i can desribe it.

Everything that seems odd can be explained as SPIRAL POWAH.
Also, how many secondary characters did you really like before they got a special nice scene/episode devoted to them?

@kauldron26: I watched the first two episodes of The Big O today and so far I’ve totally loved it. It’s so different to everything else I’ve been watching and honestly, the little moments of humor and drama, not to mention the “hard luck” vibe, it’s a lot like Cowboy Bebop.

Along with Gurren Lagann, I also loved Outlaw Star.
I cried when Kittan died T_T