One thing we may deduce about author Mohiro Kitoh from Bokurano and Narutaru is that he probably had a few bad experiences growing up.
It’s otherwise very difficult to understand why his stories about children are quite so fucked-up. Case in post, Narutaru, of which I just finished watching the anime adaptation.

I remember when it first appeared, it had an aura of uneasiness. Even now, it’s spoken of in hushed tones, but on this evidence, it’s a reputation well-earned. I’ve rarely experienced a story as angry and bitter and, well, nasty, as this became.
People talk about Blood-C or Shiki being hard to take, but until you’ve seen a bunch of 11 year-old girls trying to force a glass test-tube into the vagina of another and then stamp on her stomach, well, you get the idea.
This isn’t the type of series one would expect to see on a TV station called “Kids Station,” but as we know by now, Japan sometimes does funny things.
The basic premise of Narutaru can be described as ‘Pokemon gone bad.’ It takes the idea of adolescent children bonding with cute-looking creatures and transports it all into this nightmarish suburban tragedy where the children are less than innocent and the adults selfish.
It’s an absolutely fascinating premise, but overall, badly let-down by a low-budget and dull direction. It’s not a bad anime, but it isn’t as good as the writing deserves.
I’ve always found it exciting how Kitoh plays with genre, though.
Bokurano is another that takes the premise of every mecha anime ever and then forces it into an unrelenting world-view, where children too young have too much responsibility foisted upon their shoulders and buckle under the strain. Just them struggling a tad would be enough for most, but Kitoh pushes his characters way, way beyond breaking point. 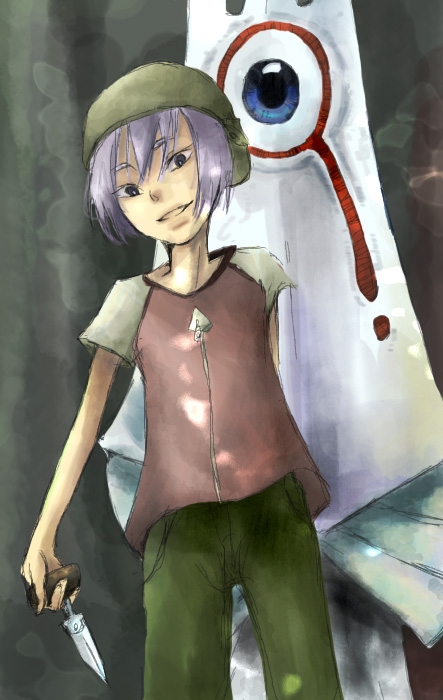 In Narutaru, the aforementioned bullied girl doesn’t so much fight her opposition as straight up massacre them in the most gruesome and cruel ways imaginable. All this in a series that, on first glance, one could mistake for Pokemon.
I kept expecting someone to step-in, or for it all to be a dream, but there’s no saviour to be found here, no shying away from immorality or weakness, no escape.
It’s not fun to read or watch something like this, but it’s interesting; a dark-side to Japan’s popular culture.
It’s easy to forgive the children in Kitoh’s stories for the things they do because they can’t know any better, it’s them merely reflecting their interactions with the adult world.
I’ve taken to describing his adults as small-eyed, soulless husks. They look so lifeless and dreary, are so selfish and sadistic, that it’s hard to imagine them as children. That, I think, is Kitoh’s point, too.
He uses, or perhaps, sacrifices, children to highlight just how precious and care-free that time of our lives should be, and why to have it taken away is so tragic.
***
I’m not into torture porn or anything like that, but Kitoh snags my attention for subverting my beloved anime genres. 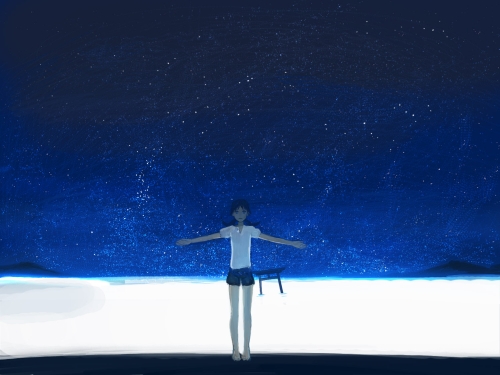 We’ve grown-up watching our heroes pilot giant robots against invading aliens and fighting off evil with their pet monsters, yet to see them fail so spectacularly is oddly captivating to me, too.
A case of putting away childish things? I still dream, but a little dose of Kitoh’s harsh reality is needed (and, quite frankly, recommended) now and then, too.

8 replies on “Because you need a little violence in your life: Dr. Mohiro Kitoh's fabulous depression”

In all of this, I find interesting that Kitoh’s work seems to verge on the idea of superflat, but in a more conceptual manner. Whereas the traditional definition of the superflat aesthetic applies to modern art – ie, visual representation – Kitoh’s works deal with superflat in the way that they handle their plot and character (and of course, in the way that all of this is portrayed through the medium of anime).
Whereas superflat visually subverses the cutesy aesthetic by using it to portray highly sexualized imagery, Kitoh uses anime and manga tropes – the teenage mecha pilot, for example – and subverses that trope. In many ways, he uses this to the same ends as the superflat movement does; highlighting some sense of flatness with the world of anime.

I never really thought about it in terms of superflat, but I definitely see where you’re coming from. Madoka could also be described as a superflat anime in that sense.
Interestingly, Narutaru also first appeared around the same time that superflat became a known thing. I suppose it’s a sign of an industry that’s reached a certain maturity when it’s able to satirise itself like this; I don’t know if that’s a good thing, either? Thinking about it now, it’s all very insular? How would someone not deep into anime approach something like Narutaru, Bokurano or Madoka?

Re: Narutaru, have you read the manga? AFAIK the anime was cancelled (gee, I have no idea why, I mean it has the cutest opening ever, and then suddenly, rape, incest and gore) but the manga went on for quite a while and had a proper ending. And boy, is it ever nastier and more bitter than the anime adaptation. This sort of thing is not really to my taste so I only read it casually and I didn’t seek it out when my source went dry, so to speak (the magazine it ran in and which a friend had a subscription to was discontinued), but I checked it every now and then and it seemed to get darker and more desperate every time. (Also, a bit gratuitious for my taste, but it might be just me.) But… I still want a Hoshimaru plushie. I can’t help it, it’s so cute!
By the way, have you seen Infinite Ryvius? That’s also a show that takes kids and places them in a situation where they have to handle more responsibility than they are used to, and of course it doesn’t go well. It’s not as violent or even dreary as Bokurano or Narutaru (not to mention it manages to end on a positive note, which is also pretty realistic), but it’s very well-written and goes to some very dark places.

I loved Infinite Ryvius.
I must’ve watched it a good 5+ years ago now, but I often remember it. A truly original series.
I’ve been slowly reading the Narutaru manga, too, but haven’t yet gone past the point of where the anime stopped. I’m not surprised to read that it just gets worse, though… If Bokurano is anything to go by, Kitoh doesn’t much go for happy endings.
Oh, and I’d totally snap-up a Hoshimaru plushie, too :p

I’m kind of amazed that Central Park Media (CPM) released this in the US on DVD, under the name Shadow Star. They released other violence-towards-children heavy anime (Now and then, here and there comes to mind) but this seems pretty extreme for an import release. It’s too bad they went bankrupt, it would have been great if Bokurano had gotten a release.

Bokurano evidently had a much larger budget and is a good anime in its own right, so I’m quite inclined to say it’s one of the real lost gems of the West.
And man, Now and Then, Here and There is another great mention RE: Celeste’s comment about the idea of superflat. It’s totally another series where you expect the happy-go-lucky main character to get through things without so much as a scratch but man, is it harsh?!
I think I need to write a blog post about series that defy expectations like this!

I find Bokurano interesting because it (and I suppose to a lesser degree Narutaru) seemed obsessed with the idea of empathy. There’s the one monologue about how a person’s life is like a movie they watch and we don’t really understand what anyone else’s movie is like, no matter how much we try. As you go through each of the Bokurano characters one by one, they each have terrible circumstances in completely different ways. So there’s an interesting contrast between the horrific actions of characters and the fact that they, and Kitoh, are really trying to empathize with each other.

I hadn’t thought of it that way, but I love your idea that despite their destructive tendencies, the characters are just “trying to empathize with each other,” it adds an element of tragedy/psychology to an otherwise quite disgusting collection of moments.