Unless you count my yearly flings with Football Manager, I’ve never been much of a gamer. Even still, I bought myself a Playstation 3 in December.

Stepping into today’s world of consoles is intimidating at first. I’d been divorced from the culture for nearly a decade and knowing how deeply some are into it, it’s easy to get cold feet.

I had to try, though. I wanted to play Shadow of the Colossus.
After stumbling over a review of it one day at work, I made the impulsive (and, obviously, expensive) decision there and then to buy the game so as to have a proper look. 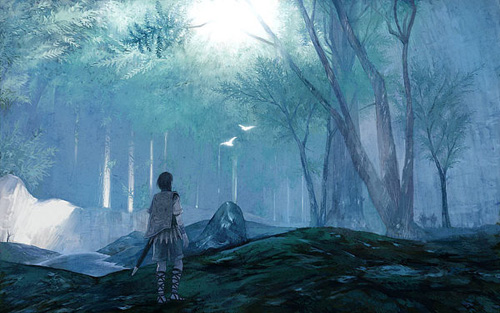 I’m a slave to aesthetics, you see.

I love minimalism in design and there’s an elegance and simplicity to Shadow of the Colossus that I found instantly appealing.

Much time in the game is spent travelling. Often I’d yearn to go back to wandering its quiet landscapes when trying to topple a particularly difficult colossus.

The colossuses make the game what it is, though. Upon meeting them, I felt awe. They are beautiful things, strange, other-worldly wonders, appearing magical and sacred against the wide-open deserts we ride amidst.

First catching glimpse of a colossus is akin to a waking dream, such is the shock of realising that you need somehow to defeat this beautiful, intimidating thing lumbering towards you. It’s hard not to just sit and gaze. 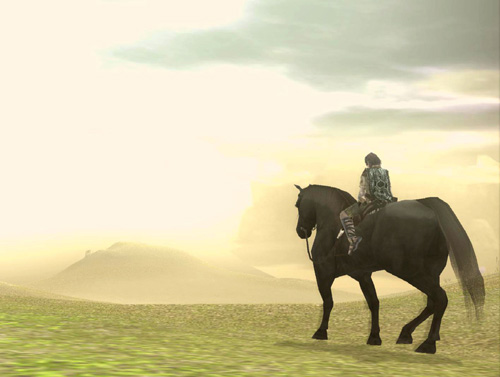 I think I fell in love with Agro, the horse, as soon as I coaxed her towards me.

Like Yakul in Princess Mononoke, much of the game’s beauty is channelled through our interaction with her; she’s our truest companion, and silent witness to the journey we find ourselves caught up in. In a place filled with surreal wonder, she’s our only link to the world beyond the misty mountains.

The soundtrack, too, is gorgeous. In my mind, I’ve always connected Kow Otani with Haibane Renmei, but this is better than that, being so sweeping and emotive and just huge.

It perhaps symbolises my naive attitude towards video games when I say that I was surprised by how good this soundtrack actually was and how much it immersed me in the story.

Towards the end, my heart began to flutter. And then sink, as I lost my dear ally. 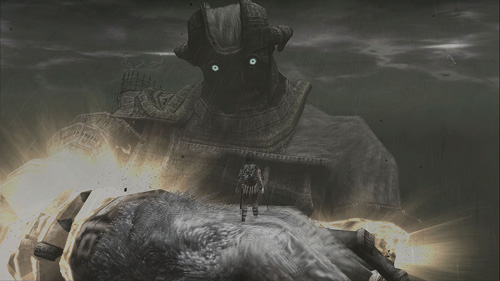 These are my impressions of playing the game, but if truth be told, I’d fallen in love with Shadow of the Colossus long before I’d actually touched it, which is a hell of a pretentious statement to make, yet I just look at the images taken from it and my imagination soars, even now. In the clouds.

I think I’ve finally seen something here that changes the way I think about video games. About time, too. (And if you have recommendations (particularly for games similar to Shadow of the Colossus,) they are more than welcome!)

15 replies on “Shadow of the Colossus”

This is a bit far off, but MYST if you haven’t already.
More intimate…
Also, due to its age a sort of ‘old digital’ charm

Sounds interesting, thanks. I’ll look into it.

I dunno. There hasn’t been a game like Shadow of the Colossus in ages.
I’d recommend NIER. It’s not a great “game” per se–the graphics are kind of jagged, the gameplay unpolished–but it has a lot of heart, and for something that the mainstream media stupidly labelled a “God of War clone” has a lot to say about the hubris of video game violence. It’s also one of the saddest games ever made, although it can also be laugh-out-loud funny when it needs to be. It wasn’t too popular on its release, so you can easily purchase a copy from Amazon for $20 or so these days.
Also the soundtrack is pretty amazing–maybe even one of the best of all time. A few examples:
http://www.youtube.com/watch?v=V1CjxQXXA7o
http://www.youtube.com/watch?v=LNZmzLzvJo8&feature=related
http://www.youtube.com/watch?v=VDftyQ96ZVs&feature=related
(Also there’s the fact that you can power-slide across the fields on a giant boar. Not to mention that the game completely changes the second time through. And that the fanservicey female character turns out to be one of the most complex heroines in ages. And, and, and!)

Added it to my Amazon wish list. Really seems a case of an underrated game, and I’m loving to music already. Also, cheap! 🙂

I’ve been a huge Kow Otani fan, and I honestly think this games OST was his magnum opus. Every track is in eyes a masterpiece. A pity he seems to have never been able to replicate the same level of quality since then …

Indeed, his work has rarely stood out as much. I had no idea he was working on Another (the anime series) this season; I watched the first episode and didn’t pick up on it at all. Ah well, I’m sure he’s still got it in him!

SoTC is a beautiful game, I recommend you play ICO HD or Bastion because they are the only ones that come close artistically and Gameplay wise.

I guess SotC is one of a kind.
Surprising, really, when you think how long the game’s industry has been going for. I wonder if it’s a case of games like SotC being too much of a financial risk? A bit like how something like The Tatami Galaxy will only get made once every few years.

I’m glad you enjoyed SotC, I would’ve figured you’d like Ico more, but SotC is the one that’s held in higher regard. There aren’t many games that have a similar feel to SotC in terms of atmosphere or general aesthetic so it’s rather difficult to recommend anything similar. Okami has a unique visual presentation and plays like Legend of Zelda so you could check that out if you’re interested. The Last Guardian will be come out one day, so until then…

I will shit a brick when The Last Guardian comes out. I guess I’m lucky I caught on now and haven’t had to wait so long!
I’m planning to play Ico soon, too. Seems so highly regarded and now I’ve tasted SotC, I’m pretty excited that I’ve got another game of their’s to play! 😀

Shadow of the Colossus *sigh*. Lovely game. Ico is good too and beautifull as well and I can’t wait to get my hands on The Last Guardian too. Hmm, the games I thought of recommending among ICO and The Last Guardian have already been mentioned but Okami and MYST are great games too. MYST game series is more of a puzzle and point and click game but it’s story, look and the feeling you get from it will definitely make you sink into the game. Give it a try if you can. 😀 I don’t know if there are any for PS3 though.
If you haven’t been playing for a long while I think you will find many great games here and there if you get the chance to crash in to them.

Oh yeah. Beyond Good & Evil just came to my mind. You might like it even though it is not like Shadow of the Colossus. There is hopefully a sequal coming for it some day. Though that will be far in the future still it seems.

ICO is the predecessor to Shadow. It’s the same hero. I’ve not played it yet but very much plan to! I agree with you whole heartedly, I love this game and did so the moment I started galloping across the land. It’s so beautiful it’s almost heart wrenching to think it would be so hard to find a landscape as gorgeous as the one in the game.

The kid from ICO is not Wanderer.
They’ve been sacrificing Wanderer’s descendents for generations, this being his pennance for his actions in SotC.

It may not be exactly the same, but I would put in a strong recommendation for FROM Software’s Demon’s Souls and Dark Souls games, since you already have a PS3. They have the same minimalist aesthetic and the strong feeling of the wanderer exploring a cold and lonely land – the games are very minimalist in design. The hype machine would have you believe they’re difficult games, but really much like Colossus, they’re games that reward careful observation and planning. Much like Colossus, part of what makes the Souls series look very nice is the quality of the character animation (also via motion-capture, I believe), as well as an attempt at a sense of realistic texture (though not necessarily realism).