(Bateszi reviewed this back in November of 2011, I’m revisiting it in light of Funimation’s upcoming February release of the show)
A strong signal that a series is great is that you can easily summarize the concept and get someone to watch it based on that short description. Ben-To is just that kind of show. All you need to know is that it’s about fights for discount bento boxes. If you don’t get excited about fights for discount bento, I don’t want to be friends with you.
END_OF_DOCUMENT_TOKEN_TO_BE_REPLACED 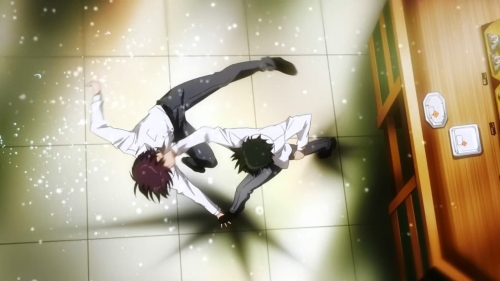 There’s a few different tactics one can employ when approaching a new season of anime. You can either jump straight in during the first week or wait a while longer for the dust to settle; neither choice is perfect, but for this season at least, I decided to wait for 3 episodes to be released before getting my hands dirty with any new series.
If 3 episodes seems an arbitrary amount, that’s because it is. My only logic here is that since I want a decently informed opinion on anime, 3 episodes are better than 1. Any given episode of a series can be misleading, but 3 are more likely to betray a consistent sense of story-telling and quality. Alas, they also take more time to watch, but for the most part, I enjoy watching anime, so that’s not such a drag!
(I say for the most part because Guilty Crown proved so atrocious that I had to quit barely 5 minutes into the 3rd episode amidst a growing sense of vertigo. So, this is what passes for noitaminA now?)
END_OF_DOCUMENT_TOKEN_TO_BE_REPLACED