Truly good horror anime is hard to find. Anime tends to use many elements of horror, but it rarely adds up to something that’s scary.

END_OF_DOCUMENT_TOKEN_TO_BE_REPLACED

“There’s a field of thought which postulates that the only reason this universe exists is because we humans do. […] I’m consumed by the thought that this world itself may be nothing but an illusion. That “Snark” in the Abstract World may be my real self, and my physical body here just a hologram.“

The suggestion that there might be a level of consciousness beyond the physical realm has fascinated people for thousands of years. Are we tied to these bodies forever, or, could this vague concept of “we” be a mere illusion; a solid container that our ‘ego’ is ready to transcend at any given moment? Science has one answer (neurology), religion offers another. While striving to understand this ambiguous essence of our individuality (or “soul”) forever remains man’s greatest quest in life, it’s ironic that the only true answer lies in his death. Ghost Hound is a very literal attempt to answer, or at least, ask those same questions.

Looking over his work, investigation of spirituality often appears in the writing of Masamune Shirow. After all, his most famous creation is Ghost in the Shell; the whole concept of which is built around cyborg Motoko Kusanagi’s search for a (or indeed, her own) soul. Within four episodes, Shirow‘s Ghost Hound has established that several characters are capable of interacting during out-of-body experiences, but unlike Ghost in the Shell, it isn’t so concerned with trying to discover, or define, that ‘ghost’ as much as how our perception of that existence remains shrouded in mystery; a mystery not even fathomed by scientists who boldly claim to understand life and enjoy “playing god” with their genetic experiments under the guise of medical advancement. 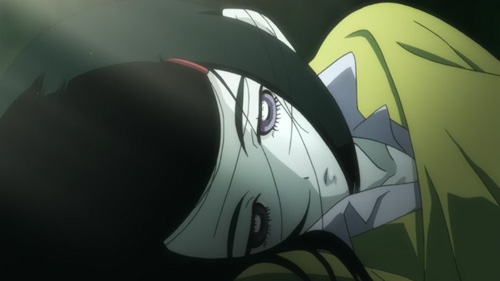 Masamune Shirow: “The present animated TV series has slightly changed the original theme and focuses on the “loss of unworldly power and transformation to an alien being called adults” as it reveals a story of three junior high school students coming into contact with the adult world.“

All this talk of spirituality is brought to the fore by Ghost Hound‘s intimate portrayal of loss of youth. Taro’s family still haven’t come to terms with the death of his sister; his grieving mother continuing to lose grip of her sanity. Makoto’s family were blamed for that death; his mother abandoned him and his father committed suicide. Masayuki’s family are just plain loveless and cold. Haunted by this past (and present) trauma, the boys bond together and adventure into a world of ghosts and imagination. People (including Mitsuhisa Ishikawa (the president of Production I.G)) have compared Ghost Hound to Stand By Me, it’s a great comparison because despite its sci-fi overtones, it’s a very emotional and moving coming-of-age journey that deals with a group of kids who, up until this point, haven’t been able to cope with the tragedy that has forever tainted their innocence.

Ryutaro Nakamura: “In an extreme sense, one could say that human existence itself is horrifying. And there are many approaches and directions we can choose in the process of speculating about what exactly this thing we call “existence” actually is.“

Director Ryutaro Nakamura, whose previous work includes Serial Experiments Lain and Kino no Tabi, is interesting, in that he regularly blends his artsy, abstract touches with symbolic human drama. Ghost Hound could quite easily degenerate into an alienating Ergo Proxy-esque philosophical exercise, but it never felt like that for me, it’s as if I can always understand what he’s trying to say. It’s quite an achievement when you consider that Nakamura and writer Chiaki J. Konaka have created a story here that regularly ponders mysticism and spirituality without ever compromising intimacy of feeling with the viewer. In particular, I’d like to note Nakamura‘s distinct use of sound; the almost negligible humming of power cables over head, the constant whirring of machinery and the dissonancent noise of a badly tuned radio. His unique mingling of discordant, unnatural sounds often creates an atmosphere of surreal ill-ease. 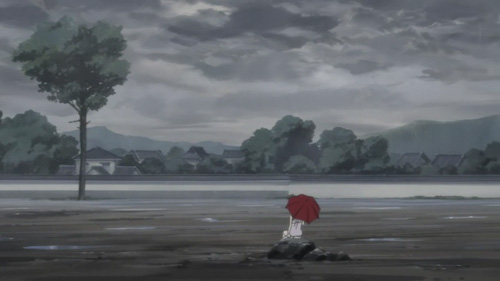 “In 2008, Massey University professor Brian Whitworth stated that all physical phenomena in the universe can be explained in terms of information. Therefore, what we perceive as reality is in fact a virtual reality run by someone on a computer.“

I still haven’t seen the last episode of Ghost Hound and I’m not convinced I’ll find an easy answer to every question it has raised. But that’s fine. In this case, being thought-provoking is enough. I don’t want a scientific explanation to try and rationalise the supernatural, or reality, or the source of life. The mystery is more engaging and more important than any answer.