In what ended up being one of the cooler mornings I’ve had recently, I stumbled upon Koji Morimoto’s Attraction via twitter. Not knowing what to expect, but hearing it paired with the words “interactive anime”, I clicked.
What followed was one of Studio  4C’s latest experiments with the anime medium. Their involvement with the upcoming (and looking stellar) Catherine action/adventure game by Atlus has been highly profiled, but Attraction seems to have slipped under the lens of most anime fans. It’s a pity, too. While it is about a rather done-to-death topic (the perils of smoking) and, in the end is a public service announcement for the French Government, there’s lots of cool things going on with this that should be brought to attention.

END_OF_DOCUMENT_TOKEN_TO_BE_REPLACED 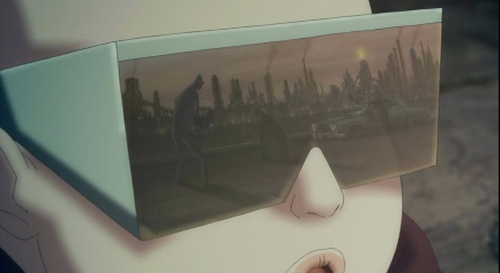 Designed to replicate the success of 2003’s The Animatrix, Batman: Gotham Knight is another anime anthology riding on the crest of a trendy movie franchise that seems destined, by virtue of Hollywood’s dollar, to be seen by many more people than your average Planetes or Gungrave. Like it or not, it’s exactly this kind of release, along with Afro Samurai and its ilk, that represents the image of Japanese animation to the eyes of the unwashed masses, and for good or for bad, tends to influence their many opinions. In this case, it’s definitely for bad.

Batman: Gotham Knight isn’t a disaster, it’s just heartless, devoid of feeling and worst of all, boring. One fist-cracking action scene follows another and while most of them are beautifully animated, the stories themselves are merely adrenaline-fuelled and tiring. Studio 4C contributes the two most visually-arresting shorts, the first ‘Have I Got A Story For You‘ and the fifth ‘Working Through Pain‘. The former has a wonderfully fluid, urban-punk aesthetic which has clearly been traced from director Shojiro Nishimi‘s previous work, the sky-scraping and colourful Tekkonkinkreet. The latter, peppered with moody lighting and authentic landscape, dares to risk some character development in Bruce Wayne and, by its end, finds our hero lost in despair. The only other segment worth mentioning is the thoroughly grotesque ‘In Darkness Dwells‘ (animated by Madhouse and directed by Yasuhiro Aoki) because it looks so unconventional and strange, like a hybrid of Gurren Lagann‘s more extreme character design and the gritty cartoon adaptation of Spawn. All style and no substance just about sums it up then. 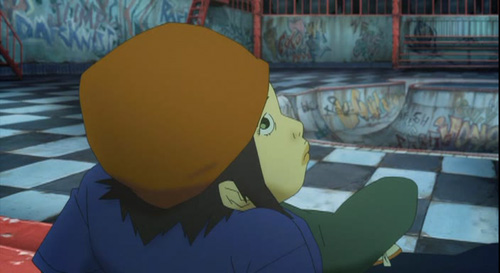 Though one could point to the meagre running-time of each short (around 10-12 minutes in length) to explain the lack of actual plot, anthology predecessor The Animatrix includes several episodes which are just as limited by time yet remain magnificent, not least of all ‘Beyond‘, ‘The Second Renaissance‘ and ‘Kid’s Story‘. The problem here is the lacklustre writing, which hardly dares stray from the half-baked villainy and cartoon dirge of Gotham City. The Animatrix‘s best effort was ‘Beyond‘, which it had nothing to do with Neo, Morpheus or Trinity, yet made the most of being animated, fun and limitless. I mean, with ‘She and Her Cat‘, Makoto Shinkai needed just 5 minutes to forge his entire career. Lack of time is not an excuse for poor storytelling. 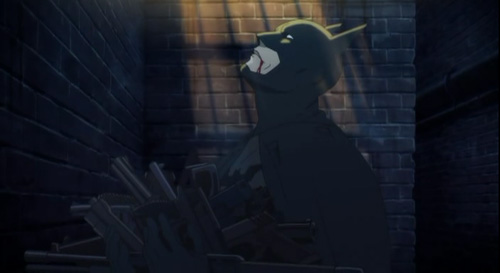 Aside from the above, my biggest issue with Batman: Gotham Knight is the stereotype it inevitably reinforces – that all anime is either Pokemon kids-fare or Ninja Scroll-level cartoon violence. What I really loved about The Animatrix is that, alongside the more typical action fluff, it shone with elements of slice of life and drama; it was a great showcase for the diversity of anime as a medium, not only in terms of visuals, but in terms of storytelling too. Gotham Knight is a throw-back to that era when anime wasn’t expected to be anything other than stupid, violent and extreme. It’s worth seeing for the Studio 4C segments, but The Animatrix this is not. 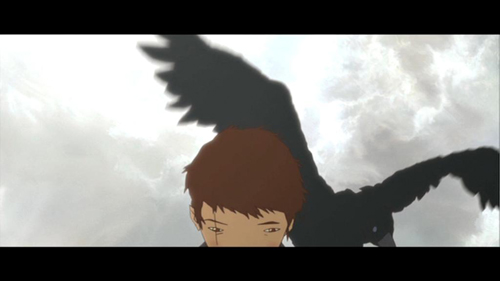 Coming from the dream combination of the emphatically cool Studio 4C and much admired manga-ka Taiyou “Ping Pong” Matsumoto, Tekkonkinkreet is a movie I’ve long waited to see. Based on those two names alone, you should expect several things – let’s start with moody and stylish visuals; almost-surreal art that gleefully shuns fan-pandering anime conventions and embraces the meaning of creative freedom, and then there is Matsumoto’s dazzling talent for empathetic story telling; his subtle use of natural dialogue and eccentric body language that’s clearly intent on plumbing the darkest depths of the human soul.

END_OF_DOCUMENT_TOKEN_TO_BE_REPLACED

Superflat is a new phrase I have discovered today. It sounds like an obscure 60s rock band but is actually a growing artistic movement subverting, rejecting and critiquing Japan’s increasingly superficial pop culture; often by lampooning it with artwork that features the cute, smiling face of a young anime character surrounded by or oblivious to a grotesque or hard hitting monstrosity.

Of the paintings I’ve seen online, the best of “superflat” is both funny and provocative; an important parody of (particularly) the moe aesthetic that current dominates Japan’s (and increasingly, the world’s) otaku and does well to highlight the hollow soul at it’s centre – in particular, the way fawning otaku can escape or gloss over an often disgusting or unsettling reality simply because a certain character looks cute. The old fashioned style of narrative story telling is dying, apparently the character (designs) are all that matter.

It’s interesting to consider works by the likes of Studio 4°C, Hideaki “Evangelion” Anno and Satoshi “Perfect Blue” Kon are often regarded as “superflat” simply because they have created anime that snub, rather than pander to, the ever demanding otaku crowd. Generally “superflat” is just another way of saying “original”, but today it’s becoming ever more important to make a distinction between the mass-produced barrels of fan service and genuine artistic endeavour.

Recommended articles on Superflat
Superflat on Wikipedia
Superflat by Artnet

Having stumbled across the passionate rants and pretty pictures over at the Star Crossed anime blog, I decided I’d take a chance on a magical girl anime called Mahou Shoujotai (also known as Tweeny Witches or Magic-Girl Squad – Alice).
Up until checking out Mahou Shoujotai, my only other experiences of the traditional magical girl anime had been Pretear (surprisingly watchable, if ever so gay) and Sailor Moon (something about a doom tree; I couldn’t get past two episodes without falling into the clutches of apathetic depression).
Despite my concerns that with this being a kid’s anime and all it would be laying on the morals a little thick, it turns out that Mahou Shoujotai is an enchanting fantasy adventure, conjuring up such an inventive, colourful feeling of excitement without ever pandering to the imposed squeaky clean innocence of Western children’s cartoons. Sometimes dark, but always fun and passionate, Mahou Shoujotai never loses its attractive sense of humour amidst a punky visual style and overwhelming fantastical adventure.
The story is- just like Alice in Wonderland- about a girl (called Alice, actually) who somehow falls into a world of magic where witches and warlocks are apparently at war. This is merely the beginning of the story (I’ve only seen up to episode 16 myself) but Alice’s journey, amidst much broom flying, odd creatures and magic spells- is an emotional rollercoaster of forming friendships and dealing with the reality of broken homes.
One of my favourite anime houses Studio 4°C is the primary driving force behind the look and feel of Mahou Shoujotai and their crazy, experimental style works perfectly within the boundless confines of Alice’s strange new world; truly everything looks weird and colourful and fun in ways rarely seen outside of anime produced by Studio Ghibli. It’s rare to find a children’s anime that evokes such a free wheeling, awe inspiring sense of adventure and fun. Mahou Shoujotai is magical in every way.

Being a big fan of the works of Koji Morimoto (Memories: Magnetic Rose, Animatrix: Beyond), I was quite pleased when I managed to track down one of his lesser known shorts – Tobira O Akete (Open the Door).
Imagine a decidedly more colourful version of British animation classic The Snowman; a young girl is swept from her bedroom and taken on a magical flying journey through an amazing fantasy world of vivid colour and odd creatures.
The drawing style, as you would expect of these experimental OVAs, is quite unique. As if to mirror the imagination of a young kid, there is more emphasis put on shape and colour than strict detail, evoking a potent mixture of magic and wonder.
Given just how surreal and vivid Tobira O Akete is, it is hard to know whether or not everything that happens was just a dream. It is fun to watch though and took me back to a time when the world really was a kaleidoscope of wonderful colours and impossible shapes.

Story so far
Set during Ireland’s War of Independence, a young Irish lass, besieged by the merciless English soldiers, seeks the help of a legendary swordsman who is rumoured to have supernatural powers.
My impressions
Studio 4C’s Comedy is a gripping 10 minute OAV from Kazuto Nakazawa; the main creative force behind Kill Bill’s ultra-violent anime sequence. This is a dark, gothic tale with no real historical significance, a vehicle for Nakazawa’s undoubted sense of style. His scratchy, sleek character designs are distinctive and attractive here, as is the hyper stylised violence. The compelling soundtrack is basically one song, but what a song; operatic classic Ave Maria.
It all adds up to be a really quite outstanding OAV, bleeding with moody landscapes and vivid characters no doubt inspired by an old European picture-book aesthetic. Comedy may only be 10 minutes long, but it works perfectly; both as a experiment in surreal atmospherics and an entertaining snapshot of Britain’s bloody history.