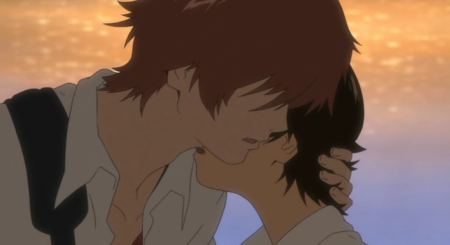 If a good movie is hard to come by, surely a good anime movie is like one in a million; what a relief then, because for now, my long search is over – The Girl Who Leapt Through Time is that one in a million. Dubbed in some quarters as the anti-Ghibli, it offers a refreshing emphasis on characters over expensive-looking visuals, and as a result, we are left with a film that may look decidedly uncinematic, yet engages us on core emotional level above and beyond likes of Advent Children; basically, a rare triumph of good old fashioned story telling.
Now, do you really need me to give a synopsis for The Girl Who Leapt Through Time? My guess is that the title is fairly descriptive, but I’ll be helpful and elaborate for you anyway. The girl in question is a tom-boy called Makoto, an eccentric and clumsy Japanese high schooler with two guys for best friends; they hang-out playing baseball, crack crude jokes and lazily make plans for summer vacation. Makoto isn’t one to spend too much time thinking about the future; indeed, while her peers worry themselves sick over shaping their future lives, her main concern is how her brat of a younger sister stole her delicious pudding.
One day, a day just like any other, Makoto discovers that she has acquired the miraculous ability to leap back in the time. What’s the first thing she does? Goes back to get that tasty pudding; not once, but two times (tastes just as good the second time). Such is her innocence, she doesn’t comprehend the world-changing, fortune-making power of her ability; she just uses it to cheat on tests and sing karaoke for 10hrs straight. Life’s easy, too easy, until Makoto discovers that her two best friends are actually in love with her.
The Girl Who Leapt Through Time was helmed by Mamoru Hosada, an exceptionally talented anime movie director who had previously worked wonders with franchise pop-corn fodder. His two Digimon movies are beautiful and nostalgic adventures, while One Piece Movie 6 is a notably dark and disturbing nightmare of a film. Such was Hosada’s growing reputation, he was offered the chance to direct Howl’s Moving Castle, but quit that project (later picked up Hayao Miyazaki!) and ended up crafting The Girl Who Leapt Through Time instead. Brave man!
Hosada’s particular talent is to capture the fun and innocence of being a normal kid in everyday Japan and then to set that against an extraordinary adventure, leaving us utterly awe-struck as a standard day suddenly transforms into a magical journey. The Girl Who Leapt Through Time is no different; Makoto and her friends aren’t anything special, they aren’t angsty punks with tragic lives, they are just standard kids living out their ridiculously normal lives. The soul of the story lies in its characters, the way they talk and act around each other; it’s their humour and eccentricities that emphasizes their realistic, heart-warming insecurities about loneliness — everyone is afraid of being alone. The end of the movie is basically an acknowledgement of this fact; the importance of friends. 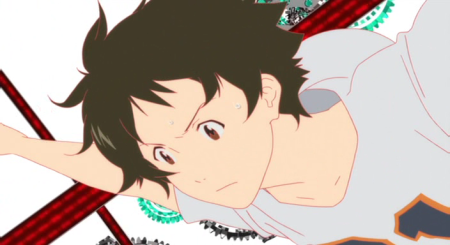 So, what at first seems like a fun and zany adventure quickly transforms into a nostalgic and bitter-sweet romance. It may only run for a creditable 1hr and 40mins, but The Girl Who Leapt Through Time is an engaging and natural drama, sparkling in its use of fantastical magical power as a means of enlightening the wonder-struck soul of a light headed school girl.

19 replies on “"If I told you that I came from the future, would you laugh?" Review of The Girl Who Leapt Through Time”

yea i loved it too… its so sad that this wasnt submitted for academy award consideration for best animated movie. it definitely would have won. im hoping they might submit it this year. i really loved the ending too. underneath that colored sky… “time waits for no one”. by the way have u seen skull man?? i dont know how to describe it. if i could use one word to describe the skull man anime: FUBAR.

AAAAWWWW YYYEEEEEAAAAHHHH! It’s about time you watched this! I just knew you’d love it! Probably one of my all time favorite anime movies, I can’t wait to see what Hasoda has to offer next!

So, this might be an odd question, but have any of you cried during an anime? That first picture up there made me bawl.

@kauldron26: The Academy Award for Best Animated Film is a farce, so even if it was legible for an award this year, no doubt it would be over-looked in favour of some dancing penguins or whatever. The only reason Miyazaki got the award for Spirited Away was because he was long overdue for recognition; virtually all of his movies are better than the typical Oscar winners, so they couldn’t ignore him any longer, but since anime is so marginalized in Western culture anyway, the awards are skewed towards nominating terrible Western animations instead. Sorry, went into a bit of a rant there!
As for Skull-man; nope, haven’t even seen one episode. I was looking forward to it but was turned off by the many reviews that described it as slow moving and boring. Obviously, the fact it’s animated by Studio BONES makes me think again. What do you think of it? Any good?
@Protodude: Your recommendation gave me the added enthusiasm I needed to actually sit down and watch it, so thanks! Anyway, god knows what Hosada will be working on next, fingers crossed it’s another project with Madhouse (they seem happy to support talented movie directors, just look at how they’ve helped Satoshi Kon’s career).
And nope, I’ve never cried during any movie or anime. I don’t know why, sometimes I get this gut-wrenching feeling inside, but it never translates to actual tears. I feel so heartless now 🙁
@chami: And if worse comes to worse, jump off the frickin’ bike. Better that than ride into a train!

skull man is only 13 eps. dude i really dont know how to describe it, but lets just say that i highly recommend it, because it is just as original as kemonozume. and what ever u think the show is about it isnt. its a love it or hate it, but it really is a mystery, packed with action and horror. but a mystery first. i dont want to ruin it for u… but it it is so non cliched that i cant believe it got made. kemonozume is the only way i can describe it. if anything u would be watching something orignal with amazing animation. i dont know how to recommend it without ruining it. its not the best anime in the world but it has its moments. how can you explain the movie memento or mulholland drive without ruining it? if someone asked me if kemonozume was good, why and what it was about, i wouldnt know what to say. id just say u have to just see it for yourself. and there is more to it that it seems.

This really was an awesome movie 🙂

One of the photos up there looks like the scene out of digimon bokura no war game but with a different character. =D

[…] Although I don’t have much of an opinion on the show itself (having only seen the first few episodes), ‘Blood+’ offers two excellent opening sequences, the second of which was directed by our man Nakazawa. The song immediately recalls Monorol’s swooning rock opening for Ergo Proxy, while the animation slips between sequences of ‘Comedy’-style gothic posturing and a wistful nostalgia for bright, easy going suburban life. Repeating this video a few times over, I’m reminded how just how much I loved that same feeling of ‘romance with nostalgia’ in ‘The Girl Who Leapt Through Time‘. […]

Toki o kakeru shoujo’s definitely the best anime movie I’ve ever watch!
it truly deserved more recognition outside Japan.
for all people who loves this masterpiece, please do recommend it to your friends, brothers, sisters or even your grandparents!

@Nakazawa – Since you mentioned Blood+, I was reminded that when I saw the 2 characters in the 1st pic, at first I thought they were Saya and Kai. (I first saw them in someone’s icon pic I think.) <3 Blood+. I want to check this movie out, though.

i loved this movie! i even drew a picture of it after i watched it because it was so good… yeah i did cry, yeah yeah, i cry in like all movies… by the way did anyone else think that they were going to kiss at the end, question: do you think they SHOULD have kissed or not?

yes they should of kissed goddammit! And i cried too ^_^ I loved this. Another i like, is a short film called “Voices of a distant star”

I’ve only been emotionaly moved twice in films, and that film was one of them! it is such a good film, i really love it, i really wanted to see a clip in the future if they met or what ever agh! damn . . .but i suppose its more the anime style to have an ending like that- its so surreal- really love it
<3
. . . and i wished i could have seen them hook up ARGH!

THIS IS MY ALL TIME FAVORITE MOVIE!!

i like it better that they didn’t kiss!
it’s so much sweeter this way(:

I think in anime emotion is much stronger when it is not physical. I like that they didn’t kiss. What I find more amazing is that I want to know more about her and that painting. I keep thinking that they will be back together. This movie is so great. I just watched it and can’t for the life of me stop thinking about it.

Actually, I am surprised that nobody commented on the soundtrack. For an anime to be truly great, a kickbutt soundtrack is an absolute must. At least half of the impact of any Miyazaki film is due to the genius of Joe Hisaishi. The entire soundtrack for Spirited Away is in my MP3 playlist, as are all the main themes from The Girl who Leapt Thru Time, both the Hanako Oku vocals and Kiyoshi Yoshida instrumental. An awful lot of Yoko Kanno’s work is also on my list, especially from Wolf’s Rain. In addition, I trust that those who truly indulge in anime will listen to the Japanese voice cast with English subtitles. (unless you understand Japanese….) English voice-over, with the exception of the Miyazaki offerings (using real talent such as Cary Elwes, Gillian Anderson and Patrick Stewart) and perhaps a few others, is usually way off the mark, almost always sounding too whiny and too ‘Valley-Girlish’ for my liking and typically quite clueless about the emotional content of the scene they are enacting. But then I am just an old guy in Ohio who apparently never got out of his teens.
BTW: I have never cried for any anime, but I’ve certainly have gotten choked up from time to time….. Grave of the Fireflies will do it every time…….

i haven’t watched this before i sounds good! when i read it i thought about what kind of pudding it was and how evil the sister was for stealing it XD well im going to go watch it

The Girl Who Leapt Through Time is wonderful and one of the best anime movies I have seen. Hosada is amazing and speaking of anime that reduces you to tears, he did that to me with Wolf Children.
I read an interesting post on the Manga anime blog earlier about The Girl Who Leapt Through Time, which also mentions Steins;Gate. If you haven’t seen it, I’d give the post a read. It’s a fantastic time travel series!