“Specter; spirit; ghost. Mononoke is a very old word, now rarely used, that describes spirits who actively haunt or pursue a person or place. Though the spirit need not be evil, it does have somewhat of a dangerous connotation.” 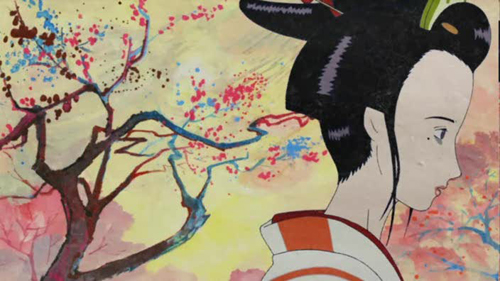 Though it borders on pretentious, I’ve always wanted to kick-off an article with a word definition. Aside from its traditional Japanese meaning, "Mononoke” is a word synomonous with a certain Hayao Miyazaki blockbuster from 1997; immediately it recalls images of feudal Japan – an era when a fading mother nature was still capable of retaining her sense of mystery and magic. And so begins the 2007 series “Mononoke” with its distinctively Japanese take on supernatural folk-law.
For those who don’t read Wikipedia, “Mononoke” is a spin-off from the self-contained “Bake Neko” segment of 2006’s 11-episode 3-story anthology “Ayakashi”. Though I started watching fansubs of Ayakashi, the prolonged melodramatics and thick cultural references of the first segment (“Yotsuya Kaidan”) wrought such a soul-destroying apathy on my enthusiasm for the series that by the time I was aware of the striking visual style of “Bake Neko”; my fleeting interest in “Ayakashi” had all but expired. Jump forward to July 2007 and “Mononoke” started its run on Japanese TV. Having been seduced by its eccentric visual style and the positive word-of-mouth, this past weekend was spent haplessly indulging in seven episodes of Mononoke’s surreal feast. To you, I present these humble findings.
Mononoke is good. 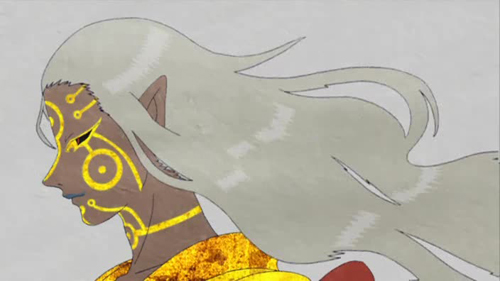 At the risk of disappointing though, I shall elaborate, and one must start with the ground breaking art. Its textured colours, flat dimensions and elegant movements radiate a period extravagance that can be compared only to the most colourful moments of Gonzo’s own tribute to affluent traditions in Gankutsuou. As if an art-book had suddenly sprung to life, Mononoke’s busy presentation is poetic and undeniably distracting, favouring surreal and dream-like sequences of animation with little regard of tired anime cliches.
As is befitting of a series with such wealth of imagination, each story arc (usually compromising two or three episodes) fully embraces the visual potential of the horror genre by illustrating the underlying human pathos that attracts the mysterious Mononoke to their pray. Incest, murder and abortion aren’t especially appealing subjects, yet the narrative gleefully borders on incoherence and exploits the natural unease felt by the viewer in broaching these decidedly organic, human horrors, gradually building up to a notably psychological nightmare concerning the so-called “taboos” of modern society; a despairing sister embraces suicide when romantically attracted to her older brother; a beautiful young lady turns to murder when the ambitions of her protective mother clash with an ill-fated arranged marriage.
Given there is nothing subtle about Mononoke, its eccentric characterisation is often at risk of becoming too colourful, too zany and too melodramatic. Indeed, its theatrical style of emotional dialogue, especially during the first story arc, feels corny and just incredibly over-the-top. However, it gets better and the voice acting is notably top notch, regularly unsettling with its horrific screams and gradual descent into raving lunacy. 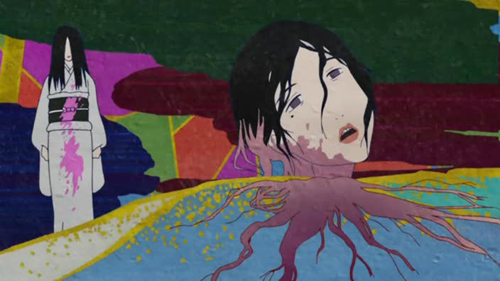 Despite Mononoke’s profusion of quality, it’s unlikely to ever find mainstream approval; when the majority are content to eat McDonald’s, Mononoke’s offering is refreshing yet extravagant, an acquired taste of textured art and theatrical story-telling that, due to its own daring creativity, is forever destined to be a cult favourite shunned by anime purists. She deserves more.

16 replies on “The hyperbole of Mononoke”

Can you tell I’m reading the Count of Monte Cristo at the moment? Sometimes I get the feeling what I’m reading somehow effects the way I write and I can definitely see Dumas’s poetic lyrical style has influenced several “decadent” paragraphs in this article 🙂

I’m not sure. It reads in a more ‘literary’ style than, say, your Naruto reviews I suppose – I often find my own writing style changes depending on mood. I was more engrossed your descriptions and the screenshots that go with them actually: are those images really representative of the animation that the show offers? It looks gruesome and twisted, yet staggeringly beautiful at the same time.

I was planning on watching this but the unusual art turned me off (I’m shallow). Oh and what about the new season? Anything of interest so far?

@Martin: Yes, all of these screenshots were snapped from just the one episode, in the second image the guys hair is flowing. It literally is that stylish and beautiful, well worth a look if you’re after something that looks totally new.
@Ivy: I’m yet to see anything from the new season, sad to say nothing has caught my eye and the previews I’ve read elsewhere don’t exactly fill me with confidence. Mokke looks like it could be good, but so far, the rest looks distinctly underwhelming to me. How about you? Seen anything good? I’m looking forward to Genshiken 2 and checking out Gundam 00, but the rest I’m still not sure about.

Ya I figured you wouldn’t be interested in this season since we’ve got a lot of eroge-anime shows. Though I have to say CLANNAD and Ef turned out fantastic, though I doubt you’d be interested in either since you seem to abhor Kanon and the like. I on the other hand can handle these kinds of shows if the production quality is good and the story remains interesting. Gundam 00 was great IMO I loved how different it was to SEED, something fresh and new is a great start for Gundam especially after the abomination that was DESTINY. Dragonaut was interesting but the god awful boobs got in the way….oh well Gonzo has to cater to some of the otaku’s needs. Ghost Hound seems to be one of the best shows of the season although its yet to air..I’ve got high expectations, its IG after all. Oh and one show I wrote off the second I saw its preview was Hero tales, surprisngly enough it turned out very good, if a little generic, (Whats not generic nowadays?).

So, apparently they ran out of budget for the last episode and it’s just mostly recap. Don’t know how true this is though.
As for what’s new this season, I’m not terribly impressed so far. Clannad was decent, I’ll probably follow it (how long is it? 24 episodes?) but the generic moe-bishojo character designs really bug me. I could barely sit through the first episode of Gundam 00, which is a shame since the fact it was directed by Seiji Mizushima got me really excited. I’ll probably give it a few more episodes, but if it doesn’t pick up I’ll definitely drop it. (Again, how long? 50? 26?) The only other shows I plan on checking out are ef – a tale of memories, Genshiken 2, and Ghost Hound.

@Protodude: if that’s Mononoke you’re talking about then I don’t think that’d be true since ep 12 (finale) is the 3rd and final part of Mononke’s Bake Neko arc (similar to the final arc of Ayakashi but set on a train in early 20th Century Japan rather than the far past as usual)

how can people continue to bitch about boobs meanwhile there are loli anime everywhere. girls that look 11 but are drawn in suggestive poses…. imagine if the cops came to ur house and saw images of shana/zerono tsukaima or any other loli character i guarantee u’d do some time in the slammer. yet people are complaining about hot chicks in anime. am i in a wrong frame of mind or what?? i dont get it at all. maybe its just me. to each his own. i liked dragonaut. it was um… entertaining and has lots of potential. the art reminds me of witchblade, i implore everyone to not dismiss the anime. half way through the anime makes a complete 180. if anything the first half was trying to appeal to the action fans and the original comic has way more fanservice. but my point is that witchblade gets very very good. and the character development and resolutions are phenomenal. it also has one of the best endings ever. the fanservice is just a ploy to attract viewers. believe me, its more than that. if u really want originality bateszi check out baccano. it has to be the best ongoing anime right now bar none.

@Ivy: I must admit, CLANNAD isn’t top of my list, but Ghost Hound looks like it could be good. And Hero Tales; isn’t that from the woman behind FMA? Either way, there are a at least 5 or 6 shows I’ll definitely try out, but there does seem to be a general lack of solid story telling that isn’t pandering to one fan-group or another.
@Protodude & Necromancer: I read a comment over at Star Crossed that basically said the same thing about the last episode of Mononoke i.e. it’s a clip show and incredibly disappointing. We’ll see, but if that’s true, it would be an utter anti-climax for such a beautiful series, but then, it’s fairly episodic anyway so not exactly the end of the world.
@kauldron26: With Dragonaut, from what I’ve read about it, it doesn’t seem to be just “hot chicks”; more like ridiculously large breasts that look so out of place and unnatural. It’s the kind of fan-service that completely renders any given scene a complete laughing stock. I mean, where is the dignity? Don’t get me wrong, there is nothing bad about, say, Yoko from Gurren Lagann, but her fashion sense suits the over-the-top atmosphere, but that doesn’t really seem the case with Dragonaut, which seems a lot more realistic and contemporary?

I shied away from Mononoke because of the art, and now I’m thinking watching because of the art. Ha, irony. The more I look at it, the more I want to watch it, the more the art appeals to me. Maybe it’s a mood thing, and right now I’m in need of something “too colourful, too zany and too melodramatic.”
In comparison to Darker Than Black and Gurren Lagann and shows of that nature, the fall season feels dead to me. For one thing, as Ivy pointed out, there’s a lot of eroge-anime. T_T
I mean, Gundam 00 started off pretty well, nothing striking, but it’s only the first episode. Dragonaut is a different story. The breasts were just too much. Yoko, for a lack of better words, was tasteful fanservice. Dragonaut is just unnecessary, though, it really is more than just hot chicks. Rental Magica isn’t exactly what I expected, but I’m willing to see it through. And Night Wizard, for what it’s worth was alright. I’m waiting on Ghost Hound and Juushin Enbu.
And, it’s random, but do watch Baccano! I’ve been following it for a while, though nothing triggered me to write a post about it. It’s a really short and sweet distraction.

Actually, I’ve been trying to watch Baccano! but the plot is incredibly hard to follow – oh so many characters! It’s a series best suited to mini-marathons of 5 or 6 episodes over a short amount of time. I’ve been impressed with it though, it has “dignity” and is very intriguing and the opening theme is positively slick, not mention having a train named the “Flying Pussy-foot”.

i for one was ridiculously disappointed with hunter x hunter. the anime peaked for me when they were on the island and had to find treasure. after that it just became redundant, and worst of all the mangaka supposedly has no plans to ever finish it. the action scenes werent even that great. im still not sure why its so popular, on animenfo its ranked number 10 i think.

I am waiting for the completion of Black-Sheep’s releases. I am not too fond of Shinsen’s subbing … I guess that’s why I haven’t watched the series completely as of yet.

[…] of grunts and power-ups. Berserk is amongst the finest anime of all time, this isn’t. 11. Mononoke I really want to love Mononoke; it’s beautifully animated, artsy and daringly creative, but […]