Ahh, my saviour is the weekend! I know my last post wasn’t exactly beaming with enthusiasm for all things animated, but with two more weeks under my belt, the gloom has lifted and I’m now tucking into tasty helpings of spring stuff on an almost daily basis. Surprisingly, there’s a lot of new series I’m feeling; in particular, Kure-nai and Macross Frontier, both of which I wasn’t expecting to enjoy quite as much as I am, while the likes of Soul Eater and Kaiba remain, as ever, firm favourites.
Anyway, this weekend is special in that it’s an extended one. Come Monday morning, I won’t be dragging myself out of bed for another draining shift at work, but instead, will be feasting on the varied fruits of Japan’s lovely pop culture. Sorry, that’s probably gloating, but the thing is, whenever I get the time to relax for much longer than a few days, I often gravitate towards manga. I’ve never been much of a manga reader, but every now and then, usually during extended, lazy weekends, I get an urge to read something. Like how this morning, I woke up with a vague interest in tracking down the nice looking (in a weird way), post-apocalyptic Dragon Head, but once that proved a little too hard to find, I turned to ZashikiOnna instead, “Regularly chosen as “the scariest manga ever” in magazine horror specials.” 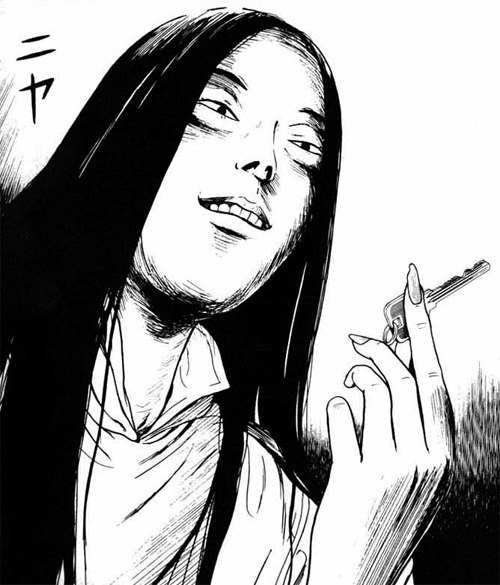 ZashikiOnna is definitely chilling. It’s not scary in a violent or supernatural way, but it’s realistic, believable horror. The story revolves around college ‘player’ Hiroshi, a relatively normal, love-sick young man living a regular student’s life. One evening, he wakes to the sound of someone banging loudly on his neighbour’s door. It’s clear he isn’t in, but the loud knocking continues for a long time. Hiroshi pops his head outside, into the hallway, to find that the knocker is this rather odd-looking girl; messy hair, dirty clothes, tall and thin, she sees him too, her gaze is strange, intense. Saying nothing, he retreats, but suddenly, the banging starts on his door too. It’s the beginning of her deadly obsession with Hiroshi.
It’s a creepy situation to be in, to have someone you don’t know, have never seen before and looks a little unhinged, invade your life. The darkness, ambiguity and mystery surrounding the girl’s fascination with Hiroshi is chilling, there’s no logic or no past connection, she’s an absolute stranger, no life of her own and hell-bent on his constant attention. The worst thing is that, despite being only 1 volume in length, ZashikiOnna is unreleased outside of Japan and only partially scanslated, hence, we’re left hanging in the midst of terror with no end in sight.
If you’re looking for some atmospheric and imaginative scares, I have to recommend ZashikiOnna. It’s the kind of horror best read on your own in a darkened, silent room with nothing but shadows and street-lights for company. For my part, I’d love it if you could recommend to me some one-shot/short manga (of any genre), I’ve got a lot of time to waste over the next few days and I’d love to fill it with some unique reading.

11 replies on “When bunny boilers attack”

Manga talk. Awesome. I’m a wuss, but I can handle thrillers. And the stalker premise looks intriguing. I’m definitely checking this out.
As for manga recommendations, have you tried reading Piano no Mori? I’m currently enthralled with the manga. The movie, not so much. If you don’t mind shojo, Koukou Debut is pretty light and fun. Also, you could try Hitorie. It’s from the same author of Parasyte.

I’m glad you’re enjoying Kurenai, Macross, Souleater and Kaiba as they are definitely one of the better offerings this season. ZashikiOnna has always intrigued me, I’ve read the summary but I’ve never dared to read it cause I’m not too good with horror stories. I will get around to it though, just not now as I’m stacked and satisfied with the stuff I’m watching. I’d love it if they could animate it as an OVA or a special. Of course a competent studio like IG or Bones would be perfect as they seem to always capture the atmosphere of the manga in their adaptations (Bones more so). I’ll keep my fingers crossed on that!

Unreleased outside of Japan? Wrong. Try France or any French speaking parts of Belgium, Switzerland, Canada and Luxembourg, it’s been published by GlÃƒÂ©nat for your information. Anyway, I checked the scans and it’s a pretty scary manga, I’ll probably get it tomorrow (7$ at my local bookstore). Can’t wait to see how it ends (I would love to scanlate it for you guys, but I don’t have the skill or the necessary material to do this)!

@ThatQuebecGuy: Cheers for that information, I suppose I need to check more sources! Anyway, I’m glad you liked what you’ve read of it so far, given that it has taken the scanslators more than a few years to do just seven chapters, I’m not sure if I’ll ever read the end, so please do write back with your thoughts on its conclusion.
@Ivy: I’m about to start work on a Soul Eater post. Having watched up to episode 6 today, I can safely say I love it! 🙂 Also, you should try the ZashikiOnna manga; it’s only short and it’s not gory and violent horror like Shigurui or anything like that, much more psychological. It’s good to be scared every now and then!
@Ten: If you do check out ZashikiOnna, let me know what you think of it. Also, funny to should mention the anime of Piano no Mori, because I’ve had it downloaded for a while now. I looked up Hitorie and it seems quite interesting; manga set in ancient Greece?! Sounds very unique. Lastly, great to see you back in anime blogging! You were always one of my inspirations, so it’s awesome to have you back in the fold.

I read the scanlations you linked to and even though I’ve read Mochizuki’s Dragon Head (although not in its entirety) I can say this is significantly more bizzare. The premise isn’t as frightening as the way the stalker is presented. He has a real talent for drawing women who look absolutely bat shit insane.
Cool find, though I wish I could read the rest. 🙁

It’s funny you should mention Dragon Head, neobanzia, because the only reason I came across this in the first place was because I’d seen an interesting (very elegant, yet profoundly weird) image of a character from Dragonhead and felt quite compelled to track it down. However, as it wasn’t easy to find online, I’ll probably buy it. After all that, I had a look at the scanslations for Mochizuki’s ZashikiOnna instead.
Out of interest, I’m looking for opinions on Dragon Head. The synopsis makes it sound really interesting.

Hey. I have the download links for Dragon Head if you want them. Drop me a note and I’ll email them to you.

will definitely check this out, always interested in creepy manga
as for short manga I can recommend Pluto
It’s ongoing, but only 5 volumes. Since it’s made by Naoki Urasawa it’s creepy as fuck

Well, I finally got my hands on the French edition of Zashiki Onna, better late than never, I guess. Anyway, the last 4 chapters that weren’t included in the Manga-Sketchbook scanlation are definitively the creepiest of them all, you’ll find; Hiroshi freaking out, Sachiko (stalker girl) going berserk (and revealing a tiny bit of her disturbing past while remaining a complete mystery), one of the scariest chase in horror fiction I can think of and the return of Yamamoto. Of course we don’t get a happy-ending, but it does end in a pretty vague way which leaves room for interpretations. It’s a great manga and very I’m thankful that you made me discover it, I’ll try to make it up to you by scanlating the remaining chapters, with a bit of luck you won’t have to wait another year to see how it ends.

Thanks for posting back! 🙂 I’d love to read the last few chapters, so if you do find the time to scanlate them, that would be wonderful. Just in-case you’re interested (and haven’t already read it), the Zashiki Onna mangaka, Minetaro Mochizuki, has another great series; it’s called Dragon Head. I’m 5 volumes (out of 10) in at the moment and it’s been quite good, so much so I’m planning a proper blog article at some point over the next few weeks. In particular, the first two volumes are wonderfully creepy and claustrophobic, as it involves a bunch of kids trapped underground after their subway train gets derailed and the tunnel caves-in on them. Madness ensues.

i love you terror and herror