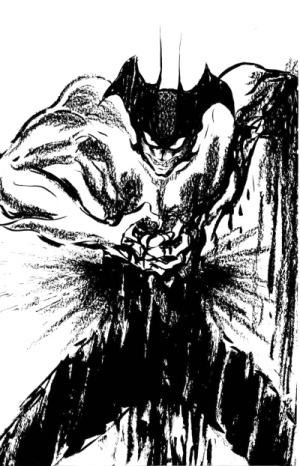 I find it interesting that you picked up a manga that is way older than I am. I just might take a look at it. Disturbing, revealing the worst in men and bloody – sounds like my kind of thing. And I’m in the mood too, it’s been a while since I’ve last read good horror manga – those being Alive and SkyHigh, both by Tsutomu Takahashi.

I keep meaning to write about Devilman myself. The thing I love the most is that moment in Volume 3 where Akira addresses the reader and warns you that things are about to get really, really bad. And then they precede to do just that over the next 2 and a half volumes. Up to that point it’s really just been Nagai’s strange superhero/horror hybrid that the original Devilman anime was, then it turns into something truly apocalyptic. It’s a shame nothing’s been in print in English of his since Verotik had some of his titles in the 90s.

Ah, I read this not long after the 5th volume was translated and thoroughly enjoyed it for the reasons you already stated. That and the 70’s art was awesome.

@Johny: It’s old, but doesn’t feel it. While animation seems to age quite badly due to technical limitations, a good comic is so much easier to create and ultimately, timeless. I guess some of the character designs are a bit strange, but I definitely never felt like I was reading something from 1972. Or, more to the point, I didn’t feel like I was reading somethng old and irrelevant.
Also, thanks for the recommendations, I’m always on the look out for good manga and that Alive is only one volume long definitely appeals!
@Brack: I’d buy this in a heart-beat. I’ve always had something of a fascination with Devilman and particularly enjoyed the 2 episode OVA from the early 1990s (though I’ve only ever seen the English dubbed version with lots of swear words).
When I finished reading Devilman, I did think back to that page in Volume 3. It’s like Nagai just flicked a switch, which is kind of neat. Also, out of interest, have you read the “Devilman Revelations” essay I’ve linked in this post? Apparently Nagai was a priest in his past life! He’s an interesting person.
@Protodude: Damn straight! 🙂

Yep, I’ve checked this on ANN and its first volume is almost exactly a decade older than me, give or take a couple of months! A shame that older titles get forgotten about with so much new stuff being published all the time; it makes me wonder how many other classics lie undiscovered by today’s fans.
I’m not into monster-style horror stories, but I recently re-read (then re-read again) the one-shot Nijigahara Holograph. There are some supernatural undercurrents and acts of quite chilling violence, but the main draw for me was the complexity of the connections between the characters and the wonderfully tense atmosphere. It jumps around in time a lot but after a while the crossed paths and apocalyptic undertones gradually begin to make sense.
I have several manga series on the go at the moment so probably won’t get around to Devilman any time soon, sadly. I currently have Translucent, Monster, and Kare Kano ongoing (quite a mixture I know!) but as soon as I finish one of them I’ll make a start on Berserk. Then buy a new bookcase, probably. ^_^’

“Amon’s eating shit in hell right now, I’m Devilman!”
The Manga Ent. OVA dub gets the prize for dub of the forever.
This Halloween I was looking toward TV to provide me with a good horror movie, it never came, sadly I had neglected the Devilman scans sitting in my desktop folder, I think I’ll go finish Devilman off then…
Also, are you going to read Violence Jack too? Since it’s apparently Devilman’s sequal, well, if you can find it that is.

lols, bateszi you seem to REALLY like horror, don’t you? Sadly where I live, we don’t celebrate Halloween so whenever its mentioned, I just think of pumpkins.
Anyway, Devilman sounds extremely interesting, especially since demons have feelings. I don’t think I’ve ever come across a manga/anime like that before, or perhaps I have but can’t really remember. I suppose that Satan wins in the end, if that’s what your last paragraph meant. In that case, I think Devilman is a definite win for me ‘cos I love it when the good guys lose. It’s sad that Devilman thinks humans aren’t worth saving any more though, but nor can I blame him. After all, we’re selfish bastards (not all, but yeah).
I would totally check this out if I had the time and strength the bear the fact that it’s older than Martin (/kidding!). But honestly, I can’t standing watching old anime so I don’t think manga would be any different. Plus I wish Devilman was hotter.

@Martin: Last week, I picked up Solanin, which is a strange coincidence, as it’s from the same mangaka as Nijigahara Holograph; I’m yet to read it, but provided the former is good enough, the latter will definitely be under some serious scrunity.
I suppose one of the best things about Devilman is that it’s only 5 volumes long, so, if you ever do feel like consuming a short burst of demonic energy (as I regularly do!), all you need is a few spare hours and a high tolerance for Cold War-era apocalypsis. It’s a wonderfully odd, horrific little story.
One last thing with regards to Berserk. The first three or so volumes of the manga aren’t up to the same standard of the anime storylines, but it suddenly improves once Guts’ flashback begins. Basically, I’m trying to say don’t give up on the manga if those first couple of volumes do seem a tad ‘off’. It does get better.
Oh, and you’re not the only one that needs a new bookcase either. I have a pile next to my bed right now that is fast becoming a veritable death trap, so much so, I’m worried that I might end up like that one guy in Japan, killed in his bed after an earthquake forced his manga collection on top of him!
@Lupus Inu: If you haven’t already, do finish Devilman. The second half is so much more intense and evocative than the first, so try to persevere. I really think you’ll like it. As for Violence Jack, I might look into it; having seen the VJ anime, it’s that much more extreme, erotic and profane than Devilman, and with none of the ‘horrific beauty’ of the demons, I’m not as curious about the manga as I normally would be. Not to mention, the end of Devilman is so perfect I’d rather not see a sequel.
@blissmo: Like I said to Martin above, Devilman isn’t exactly a big read. It’s only 5 volumes long, so, if some day you do happen to be feeling a tad brave, you might want to have a peek. As for Halloween, we don’t really celebrate it in England either, but, as you’ve noticed, I like horror and Halloween is as good an excuse as any to write about it!

[…] all. I don’t know much about Nagai, but my impression from what I’ve picked up here and there is that he’s a bit of a loose […]

I haven’t read this yet, but will most definatly take a look.
I’d be surprised if you hadn’t read it, but look up ‘Uzumaki’ by Junji Ito. The most terrifying, disturbing, and brilliant thing I’ve read in a long time. It sticks with you for a LONG time, and leaves you bloody horryfied.
In fact, all of Junji Ito’s works are utterly twisted and fantastic, I highly reccomend that you check ir out.

Hi Violet, I’ve actually read Uzumaki and reviewed it here; it is as twisted (literally in some cases) as you make out! 🙂
Have you read the Enigma of Amigara Fault? That’s one of his short one-shots, but damn… it is disturbing.

[…] still a hell of a lot more to Devilman than just this, and not least of all the second half of the manga, which delves into some truly dark, apocalyptic material. Basically, watch the anime and read the […]

[…] and violent for them, 600,000 fans or not! Other comparisons of note would be to the likes of Devilman, Claymore and Parasyte, because there’s just something to be said for seeing a bunch of weird […]