Apparently, Shingeki no Kyojin can be translated to ‘Advancing Giants’. It’s a new-ish, still on-going manga (began serialisation in 2009) that I started reading at the weekend. In it, humanity has been brought to the brink of extinction by an unstoppable wave of man-eating giants. Where did they come from? Nobody knows! And why do they eat only humans? Again, nobody knows! The giants don’t feed on us for sustinance, they do it because they can!
Mankind somehow survives by sealing itself within a city, surrounded by 50 metre-high walls to keep everything else out. 100 years later, it’s an era of relative peace, but suddenly, this guy appears… More than double the size of any giant ever seen before, he (literally) kicks a hole in the city’s previously impregnable defences and unleashes the horrors outside waiting to get in.
And so, the real story of (the award-winning) Shingeki no Kyojin begins.

How best to describe this? First, imagine the grittier aspects of Eden: It’s an Endless World!. Shingeki no Kyojin is a shounen manga, so it’s not as ‘adult’ as Eden is, nor is it as technologically advanced, but that sense of a future gone awry is palpable. In the face of such overwhelming odds, a person’s life starts to feel so fragile and insignificant. People are eaten in this series like it’s nothing. Mothers, fathers and children alike are all just swallowed up by the tide of violence. 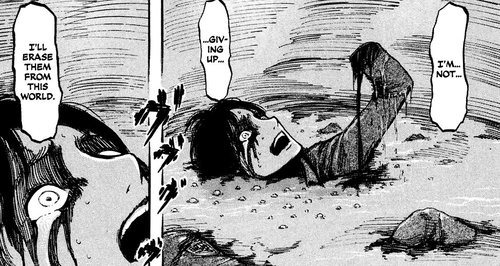 That feeling of helplessness is vital, as when seeing these characters struggle against fate, one clings to any glint of hope, cheering on the elite few able to attack and actually take-down the giants; there’s a number of really cool moments in these first 3 volumes where one of the characters (usually Mikasa, a Battle Angel-esque teenage girl with ridiculously talented moves) goes up against an impossible opponent, yet somehow comes out alive. Similarly, there’s harrowing scenes where (the sometimes young) characters, rather than become giant food, turn guns on themselves.
Apparently the mangaka (first-timer Hajime Isayama) actually tried to get this serialised in Shounen Jump, but was turned away for being “too manga, not enough Jump.” Alas, it’s selling really well in Japan right now, but I can also see why Shounen Jump declined. It’s just way too harsh and violent for them, 600,000 fans or not! 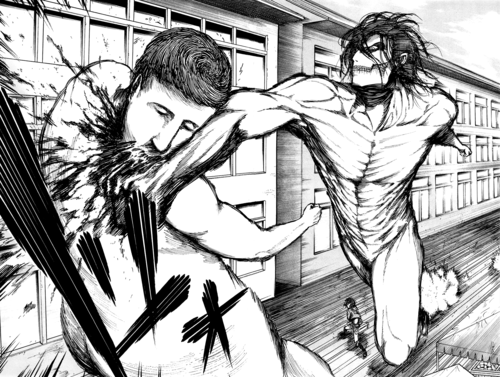 Other comparisons of note would be to the likes of Devilman, Claymore and Parasyte, because there’s just something to be said for seeing a bunch of weird monsters kick the shit out of each other! Basically, I started reading this because ‘giants attacking mankind’s last city’ sounded really cool, and that it also won an award (despite that premise) made it intriguing enough for me to seek out. 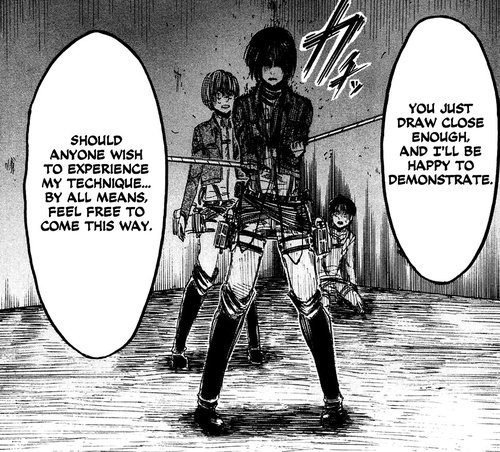 Where this is all leading is hard to say. It doesn’t feel like a series that can go on forever, but I would think it still has some ways to go yet. Mystery lingers over the origins of the giants and why they are locked on wiping us out when they don’t need to; they don’t speak and show no sign of intelligence, yet they eat hungrily. The Giant giant is a different matter, though; he just appears at the gate and then vanishes into thin air, having intentionally busted open the walls. All of these questions have got me really hooked on Shingeki no Kyojin. Well, that, and the strong sense of fear that hangs over the city at all times, and the really cool, brave characters held within.

I am leaving a comment here of necessity, so that everyone understands how insanely awesome this manga really is!
I understand where you’re coming from in comparing this manga to Eden, as there’s a similar.. chilling desperation to its storytelling and characters. Where I like Shingeki no Kyoudai more, however, is in the fact that the art seems to respond to this desperation. It’s often maligned and disproportionate, as well as appropriately rough and grotesque (and not just in terms of the giants). Eden was a bit too humanist in its forms, but ultimately (as you’ll see if you ever finish it) Eden is humanist in its focus, so this is appropriate.
This is a manga that never seems to slow down, and that pacing almost reminds me of Gurren Lagann – no-holds-barred, “there is no turning back” kind of pacing. But where as Gurren Lagann was ultimately triumphant in its tone, Shingeki no Kyoudai definitely isn’t. Somehow, you kind of know that humanity (as if it isn’t already) is going to be pushed within a breadth of extinction, an the only method of survival is to morph into something perhaps non-human. I think it’s this knowledge of their ultimate failure which makes the struggle so interesting to watch. That, and the uncalley valley effect that the giants have.
Anyways. Like bateszi, I wholeheartedly throw my recommendation of this series out to the world. Not that anyone reads the comments or anything 🙂

This sounds nice and mayhem-y. Do you think they will actually explain the giants, or leave them as is, big people-eaters who are a possible metaphor for something? Sometimes explaining them ruins the fun.

Although I’m loathe to compare yet another thing on this blog to Evangelion, it’s probably apt to compare the giants of Shingeki no Kyoudai to Evangelion‘s angels, in that it’s never explained where they are coming from, nor do they ever try to commicate with the humans. They simply march in and… feast. The giants themselves look really strange… They have no sexual organs, their arms are often very thin and short, but they have these weirdly happy/blank/apathetic facial expressions. Basically, the giants are (so far) completely alien. Like you, I hope it stays that way (but if it doesn’t, I hope the explanation is suitably Bokurano/Madoka scale!)

Also, “childhood friends joining the army to fight aliens trying to destroy humanity” reminded me to starship troopers a bit. But the first thing to come on my mind was NGE as well.

I wonder what the odds are of this getting an anime adaptation. It seems like anime shies away from darker stories (with some very notable exceptions) but if the series is popular in Japan there seems to be hope. Have you heard any rumblings or is it too early to know?

It’s probably too early, but it’s incredibly cut-throat for a mainstream shounen anime, so if it were to get animated, I’d expect it to be a late-night production. According to ANN, it’s the third best-selling manga in Japan this year after One Piece and Gantz (above Naruto!), so I wouldn’t be surprised to see an anime adaptation sooner or later to cash-in. I’d love to see a Madhouse, Studio 4C or Production IG take it on.

I recently caught up with this series, and I definitely agree with you. It’s one of the most promising works of Manga that I’ve come across in a long time — you can really feel how much potential it has, so I’m hoping the quality will remain consistent as it develops. The sense of desperation and helplessness throughout most of the chapters really works, but it never feels like darkness and violence just for the sake of it. (I’m very surprised that it’s a Shounen, though…)
I think the characters are ultimately what sold me on this one — the general plot of killer giants didn’t initially strike me at all, but the human touches in the characterisation and relationships surprised me and pulled me into the story. The three main characters all have distinctive personalities and interesting elements to them, but even the ‘side characters’ seem to work very well, and the flashback sequences really reinforce that. Definitely going to keep an eye on this series.

[…] Araki (of Death Note and Kurozuka, amongst others,) it’s the adaptation I was hoping for back in 2011. So, is it any good? Going by this first episode: hell […]

[…] grounds, The Promised Neverland is a dark thriller in the vein of Death Note and, dare I say it, Attack on Titan, where intellect, skill and determination trumps brute strength. Assuming that the production by […]

[…] up to volume 5 of the series and, man, I just want to keep going. For those that haven’t read my first post on it, Shingeki no Kyojin is a large-scale survival-horror manga about a future-Earth dominated by […]

[…] the volumes released so far of the fantastic horror manga Dorohedoro and devoured my pre-order of Shingeki no Kyojin (Attack on Titan) volume 1. I doubt any of these will still be in print in 10 years, so we need to […]