Since writing my first post on the manga series Shingeki no Kyojin (the official English title is apparently Attack on Titan,) it’s been licensed for an English-language release by Kodansha USA, whilst a Japanese live-action movie has also been announced for 2013. With the inevitably small film-budget it’ll receive, I’m not convinced it’ll look good enough , but then again, it still sounds better than the forthcoming Akira film!
Last night I finally caught up to volume 5 of the series and, man, I just want to keep going. For those that haven’t read my first post on it, Shingeki no Kyojin is a large-scale survival-horror manga about a future-Earth dominated by man-eating giants (known in the series as Titans.) With humanity on the brink and walled up in one last city, the series begins as the Titans break through the city’s first line of defence.
Imagine any zombie film you’ve ever seen, and then replace the zombies with giants. Mankind’s fucked, right? It’s lucky then that the main character, Eren, can transform into a Titan, too! 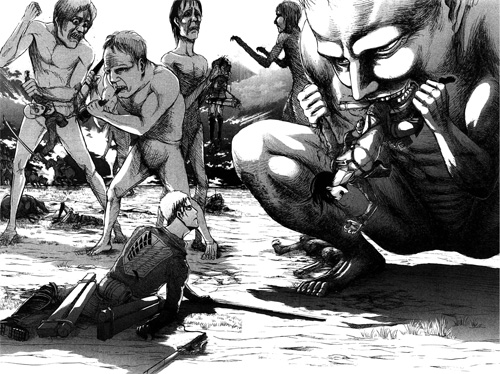 The first 3 volumes drag us from 1 impending crisis to another, but the next 2 slow things down a bit. Now that Eren’s secret’s out, he’s kept in solitary confinement by the government as it’s decided how best to deal with him; whether to execute him or use him as a military weapon. Eventually, the latter is chosen, and the next offensive is planned. The start of that is about as far as things go in volume 5.
What’s remarkable about Shingeki no Kyojin is how it deals with collateral damage. For every forward step made by the people of the city, there’s a strong emphasis on the cost in human life. Eren is the “Gundam” of the story, but he’s still only 1 giant versus dozens. The larger part of these two volumes is spent introducing us to the young recruits in training. At their graduation, they are given 2 choices: either join the police force or the scouting legion. Hardly ever coming into contact with the Titans, the police are tasked with guarding the city. It’s the easy choice, basically, but the scouting legion is totally the opposite; they are the front-line of humanity’s counter-attack. 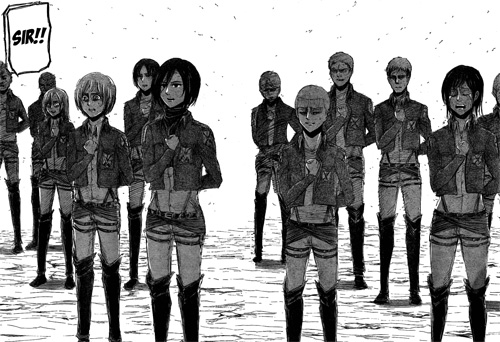 At their graduation, it’s explained to the young people that if they were to join the scouting legion, there’s a 50% chance of dying on their first mission. You join them knowing you’ll likely be dead in 6 months. Most walk away there and then, but some stay: stay because their friends did; because they want to make their families proud; or just because they feel it’s the right thing to do. 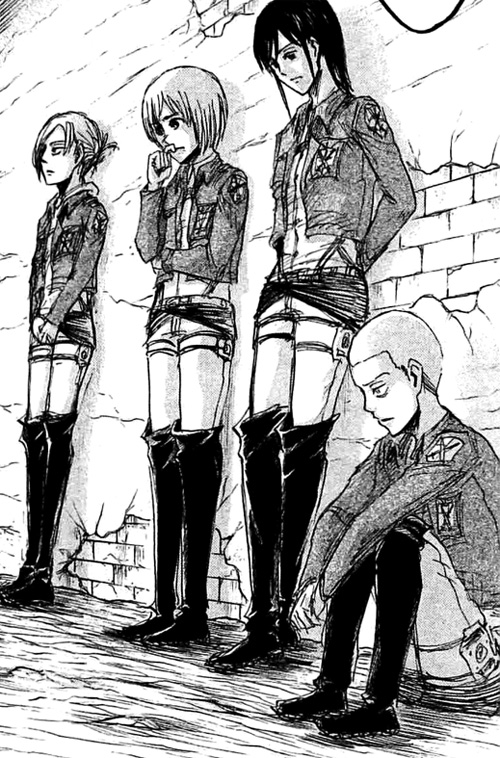 On the series’ Wikipedia article, author Hajime Isayama notes that his story’s all about “…the idea of walls and complacency in human society as opposed to independent spirit and freedom of the main character.” Contrasting that with the choices made by the characters underlines the human quality of the writing, because we all face tough decisions in our lives, we all get a little complacent and make safer choices. Isn’t it better to fight, though? Than to allow yourself to be trapped, that is? Even if you’re scared, it’s a risk worth taking. I don’t know if I’d join the scouting legion, but I admire the courage and spirit Shingeki no Kyojin‘s trying to convey.

7 replies on “We offer up our heart's blood: Courage and spirit in Shingeki no Kyojin”

What a lovely write-up, inspiring. I could definitely see this being turned into a worthwhile anime with the right studio and sturdy team. Could create something truly special.

Thank you, Ivy. I’d love to see an anime adaptation of this too. Given how popular it seems in Japan right now, it should just be a matter of time. Hopefully it’s just a case of waiting for its mangaka to come up with an ending, which might still be a few years off yet. Ah well, it’ll be worth the wait! 🙂

I remember your first write-up. I’m glad it’s being released in the US, though in my current position it makes me hard to get hold of a copy. SOMEDAY maybe I’ll get a chance to read it.
I love how …”“…the idea of walls and complacency in human society as opposed to independent spirit and freedom of the main character” has been turned into a story about man-eating giants invading a city. The quote sounds so noble, the plot description so silly. Well, the individual vs. society theme is a common one. You might as well have one with man-eating giants along with all the others.

As I’m finding out to my disappointment, manga can quickly become a rare commodity. I’m trying to find all 10 volumes of Blame! at a reasonable price but since it was published by Tokyopop, who’ve since folded, it’s now out of print and really difficult to find specific volumes of. So, yeah, if you’re interested in something like Shingeki no Kyojin, it’s worth keeping an eye on. Suffice to say, I’m going to be ordering each volume as they’re released!

I think the complacency vs. risk taking angle is a really interesting one, it’s one of life’s most difficult questions. I had to make a decision recently about going on a faster or slower track at work, faster track was a higher risk/reward proposition, slower track was less risk/less reward. I ended up taking the less risky option, but I do have second thoughts.
It’s tough to make those kind of decisions because you often don’t get told the odds of succeeding in the venture. Plus, even if you do know the odds, humans are bad at evaluating the odds. We all think we are above-average even when we aren’t.

What I love about the portrayal of the military systems in this manga is how truly effective they are at displaying what true bravery looks like. The base message of: “It’s better to fight against impossible odds than hide in the shadows.” is one carried by literally thousands of works in every art-form imaginable. In other stories, I find it’s too easy for the reader to be lulled into the naive mindset of: “Yeah, if I was in that position, I would totally make the brave decision and fight like a hero against impossible odds. ” This makes it pretty hard to sympathize with any characters that display legitimate and crippling fear. The thing with Attack on Titan is, when I’m reading a scene where it shows characters that want to join the military police for the safety of the inner wall, I don’t consider them cowards and look down on them, I completely understand their fear. On the other hand, when I see characters “standing up for noble ideals”, “doing what’s right” and “being brave” by joining the Scouting Legion the thought running through my mind is “FUCK THAT SHIT, Military police all the way”. That’s just one of the little things I love about this series, it manages to portray an incredibly authentic human element in an incredibly inauthentic and unrealistic universe.