Skip to content
The Japanese economy is currently in the middle of a huge transformation.  A generation ago, a Japanese person could finish school and seamlessly transition into a company job.  The job might have grueling hours, but in return it offered lifetime employment at a good wage.  Japanese men sacrificed their time with their families so that they could reliably provide for their families.  Fast forward to today: production has shifted to China, Japan has endured a period of low economic growth and few jobs promising lifetime employment exist.  Young people in Japan face an uncertain future as they fight for jobs that promise temporary employment at best.  [C] Control styles itself as a show about economics that focuses on the big issues of the economic future for Japanese youth.  Whether it can address those questions successfully, even as it spends much of its time on fights between monsters, remains to be seen.

The monsters in the show are avatars (called assets), controlled by their human masters, that duel in a special world called the “financial district”.  The duels revolve around money.  A person in a duel must spend money to let their avatar launch an attack.  If the attack hits, then the person makes money.  If a person is hit by an attack, then he or she loses money.  Even though a large bank account may give a person more power in a fight, skill still plays a role.  For example, the attacks a person chooses and the person’s ability to evade attacks are important factors in deciding who wins the fight.  Duels can end in two ways.  First, each duel has a time limit.  When the limit is reached, the duel ends.  The duel also ends if either player runs out of money. If a person goes bankrupt then he faces consequences in the real world, generally death or worse. 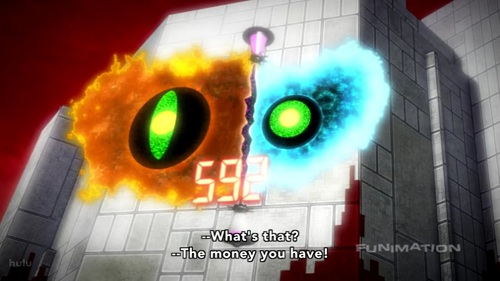 The concept behind this show is interesting and the battles are certainly fun to watch. Still, I wanted something more.  The show has not lived up to the expectations I had after watching the first episode.  Life or death games can serve as interesting metaphors for real life, like in Battle Royale, but several anime have already extensively used this concept, including most recently Eden of the East.  I was excited after the first episode because I thought this show had tapped a rich vein about Japanese life.  I hoped it would explore how the Japanese are dealing with a new economic reality.  The show tries to insert deep commentary about how the economy dictates people’s actions.  But these comments seem hollow in a world where battles that could have come from Digimon, not the economy, are really what drives the world.