Hyouge Mono, who would’ve known? Koichi Mashimo is regarded about as highly for his directing prowess as Bee Train are for their animation. Which is to say, not very highly at all, so I can’t really blame you for glazing over a late-to-the-party series like this, but as any right thinking English gentlemen will tell you, tea is what our great British Empire was built upon and, well, most of what I knew about Hyouge Mono before it aired was that it somehow involved tea. Colour me curious, then, and lo and behold, word begins to trickle down that Hyouge Mono might actually be worth watching after all.
Firstly what’s important to note is that this is a series produced and broadcast by Japan’s BBC-equivalent NHK, bringing with it a higher profile than Bee Train’s typical fare and, therefore, probably more money for animation. It shows, as this is easily the best animated series I’ve seen from them. 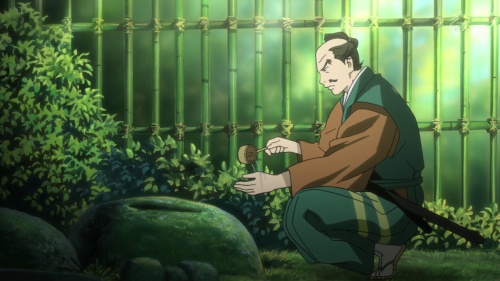 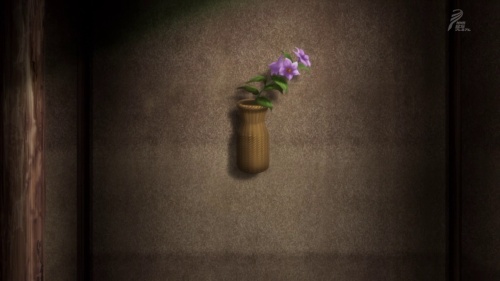 Hyouge Mono is a quirky medieval piece about the famous Nobunaga Oda, as seen from the perspective of a warring general with a passion for art. The word I’m looking for here is aesthete, which is used multiple times to describe the man, named Furuta Sasuke. He admires the sizes and shapes of all kinds of objects, from giant warships and towering castles, to, yes, exquisitely designed teapots. In this story, the best-looking teapots have their own names and are highly sought-after, so much so that even a particularly average teapot can be (and is) taken as a symbol to discern a host’s enigmatic courtly intentions. In fact, Sasuke is so taken by one beautifully crafted teapot as to compare to his wife’s shapely breasts (at the same time as making love to her, no less!)
I’ve read people calling Hyouge Mono boring, but for me it’s not like that at all. Don’t get me wrong, there’s a distinct lack of magical girls and mecha, but if one approaches this series with a patience for long exchanges of dialogue between middle-aged men and arguments over decorated wooden chests, the reward is an interesting and amusing clash of war, art and culture. Think House of Five Leaves, minus the homoeroticism, but more muscle. 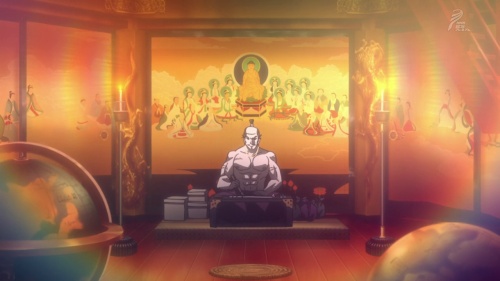 Nobunaga is a ridiculously cool guy. On the one hand, he’s pure flaming ambition, commanding his vast army to unite all of Japan under one banner, yet he’s an admirer of art and honesty, too. He cuts down a smart-mouthed merchant for not having the courage to stand behind a sarcastic remark, but values his aesthetes for their refined tastes in all things artistic. He decides to have his warship painted black because one such master of opinion suggests a darker shade would be more befitting of such a fearsome bulk. The weight of this scene is implied by Nobunaga’s ruthlessness. He isn’t the kind of guy many would disagree with, especially not in public. Speaking out against him, particularly given the dead merchant minutes earlier, was a particularly brave thing to do. 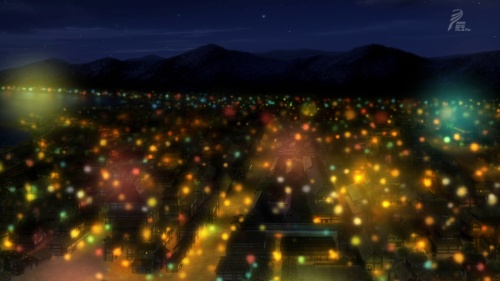 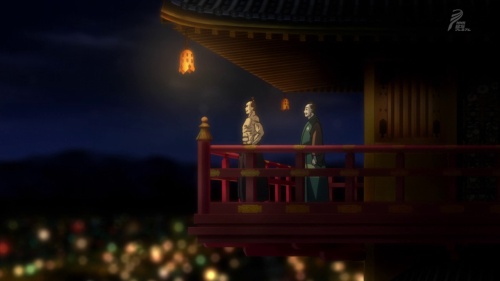 Basically, Hyouge Mono is all about art, courage and conviction, set against a Japan being turned upside down by civil war. Nobunaga looks out from his towering balcony to see hundreds of coloured lamps lining the streets below. He ordered his people to do it, just because he thought it’d look nice. It’s such an epic sight, and Hyouge Mono is this season’s wild card. I suspect an epic (in the traditional sense) is in the offing!

I’m so glad someone else gets this series! I’ve seen the posts about it being “boring because it has something about tea in it”. But it clearly has so much more to offer. Besides, there are plenty of series about hunting down famous armor, or looking for the lost sword of yada yada. Isn’t it time for a show where samurai are chasing after legendary tea kettles?

I’m having fun with this show even while scratching my head over the political intrigue and ultra-refined aesthetics of that time. Sasuke is a terrific character. He tries his best to be a loyal and able servant of Nobunaga (and we’re shown that he is very capable, even risking the life of his beautiful but strangely eyeless wife during a negotiation–in the same episode that we get the shapely breasts scene!), but the sight of something beautiful knocks him off his pins every time. Maybe a little too much. Even the thought of seeing a famous bowl or kettle brings a reaction so extreme that I keep expecting the others in the room to ask him what the hell’s the matter.

I loved that scene with his wife. I had no idea if he was actually going to kill her or not, and really couldn’t tell which way it was going to go! Moments like that sealed this series for me!

“In this story, the best-looking teapots have their own names and are highly sought-after” – that’s actually historical truth: beautiful tea items were valued very highly in those days, Nobunaga himself was quite fond of them. Several of them had names, including the (in)famous Hiragumo which was said to be pretty high on Nobunaga’s “must get” list, and there are popular anecdotes about Nobunaga demanding it from its owner and fellow tea fan Matsunaga Hisahide (after he had him cornered for betrayal and whatnot), and Hisahide destroying it out of spite.
So, the anime is good I take it? I’ve been avoiding it because I like the manga a lot, but I have quite an aversion to Bee Train and I thought this manga would deserve a lot more. But if it looks nice and the pacing is good…

Thanks for the info. I noticed there was a big Wikipedia article on Nobunaga, but I fled in fear of spoilers, so it’s nice to know that these people really were that passionate about art! Also, yeah, you should totally watch this– if just because I’m interested in reading your opinion of the adaptation, particularly how it fares in comparison to the (award-winning) manga.

Sold!
Seriously, the only one of this season’s shows I’m currently following is the second season of Kaiji, which was a no-brainer decision given the fact that it’s more of the same. For some reason the latest season hasn’t screamed “check me out!” yet but I’ll give this one a try. I certainly wouldn’t assume a relaxed and measured pace equates to ‘boring’…and besides, I’m curious about a Bee Train production that’s not a Noir clone.

Definitely not a Noir clone! It is a bit too early to say much (2 out of 39 episodes have been subbed), but so far it doesn’t look like a clone of ANYTHING. It could prove to be a highly original series. Worth checking out.

Yup, without knowing before hand, there’s no hint that this is anything like any other Bee Train anime.

Hyouge Mono is exceptionally good, and that 39-episode count is trying to signal something, I know it!

I really hope so, too, and I get the feeling there’s some huge stuff looming large on the horizon. Monster was the last time we got something as long and as mature as this.

Nice, someone else who gets Hyouge Mono. I missed this comment amidst the usual storm of boring commentary about Madoka and other popular shows. I’m looking forward to seeing a humorous perspective on feudal Japan that isn’t about turning key historical figures into mecha or loli (which I find disturbing).
The early reactions to this anime remind me of the ones for Spice and Wolf. It’s just as difficult to classify, the kids all hate it, the younger adults are afraid to like it, and everyone in their late 20’s or older are loving it. If only more companies would risk an anime that isn’t the same thing over and over.

[…] loyalty to the art he is most passionate about – the Japanese tea ceremony. Thanks also to bateszi for alerting me to the fact that we finally do have some translation […]

Just caught the first episode of this, and boy, colour me impressed. So far I wouldn’t call the animation or acting inspired, but the series is as high concept as they come, and really proves that the truth can sometimes be as strange and as entertaining as fiction. The research is incredibly well done.

Nah, Mashimo ain’t that bad. He directed the Tylor TV series back in the day, after all.
Anyway, for a story about aesthetics and tea, the show is ridiculously entertaining. Plus the OP is smooth as hell.

[…] episodes, so there’s clearly some money behind the project in the same way that there was for Hyouge Mono. Both are based on award-winning manga, which might explain their prestigious […]

Hyouge Mono is fascinating for the zen practitioner and teaist. To the Japanese who grew up with some of this culture the introductory scene juxtaposing the scenes of the ancient samurai, the zen garden, the elements of the tea ceremony and the contrasting images of modern life with fast food, alcohol, airplanes and cities must be especially poignant. What tea drinker won’t appreciate the quest for the perfect zen tea ceremony, or the emptiness of the Oribe teaware and tea house? The anime drawing are awesome. The English subtitles are unbelievably poor translations, but since tea and zen are universal langauges it is not really important. Just let go and enjoy! A classic!