In 12 episodes, Puella Magi Madoka Magica convinced me that there’s more to Akiyuki Shinbo than otaku-pandering. The director has increasingly been held in high regard, but until Madoka, I’d not taken any substantial steps into his oeuvre. Not even Bakemonogatari coaxed me in, but post-Madoka, I’ve found a lot of new respect for the man.
Experimental and fearless is how I’d describe the series, as not only does it impose a very specific, artsy aesthetic on a subject matter reserved for the hardcore, it also takes a hard-line with its young characters. Much like Bokurano, it never backs down, or allows for an easy way out.
Credit must go to the writers, too. Yesterday’s wait for these last 2 episodes was exciting, and it’s been a long time since I felt that way about any series. It’s not just that I was intensely curious about where it was all headed, but that I was also confident in it being competently delivered. There was never any doubt in my mind that it was going to be good, and that’s a testament to episode after episode of solid, consistent writing.
It’s a shame that perhaps the weakest section of the series is its first couple of episodes, because they present something of a leap of faith for non-believers, yet without a more conventional beginning, we’d probably lose that delicious taste of subversion. So delicious; a big part of the fun of watching this is just reveling in the idea that such an idealistic genre has been turned upside-down. Surely, someone, somewhere, was outraged.
I suppose this is where the Evangelion comparisons come into play, too, given they both inherit the trappings of their respective genre, only to then spit them back into our shocked faces. I liken those first few episodes of Madoka to a coiled snake. Suddenly, the snake bites (and that moment was unforgettable.) 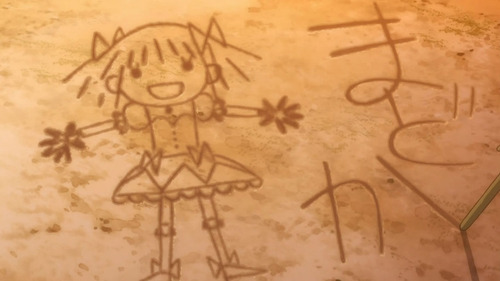 Madoka‘s legacy, I hope, will be to push anime further into the realms of experimentation. I need to own this series, place it on my shelf alongside The Tatami Galaxy and Mushishi. Most of all, though, I just want for Madoka to set the right examples. There’s no substitute for good writing; original anime can be exciting; and experimental animation can be affective. Just be brave, everyone, but especially you, Japan.

Funny, I remember seeing an image of Madoka back before it aired and immediately dismissing it as moe-bait trash from a genre I held no interest in; having just watched the last two episodes I can safely say that was one of the most severe misjudgments I’ve ever made regarding an anime.
After THAT moment my respect and interest in the show pretty much skyrocketed up to the end and I have no reservations in placing it among my firm favourites. Great storytelling, great direction along with bold, bizarre visuals – somehow it all worked just perfectly.

You’re not alone in under-estimating it, Wildcard. I very nearly dropped Madoka after the 1st episode, but yeah, sometimes fate conspires to keep us going! 🙂

Truly epic series, hopefully it could drag the anime industry out of countless light novel and manga adaptions.

I’d like to think so too, Random. Of this season, I’d suggest Tiger & Bunny, [C] and AnoHana are amongst the leaders of the pack, and all 3 happen to be original productions, so there’s definitely some evidence to suggest the industry is making an effort. There’s now some hope, at least!

Ah! This show has me so excited! I have all 12 episodes on my drive ready to be devoured. Now after this review-esque writeup I’m confident it will be right up my alley. What surprised me the most though is how much you seem to like the show. The whole look and Shinbo’s track record don’t necessarily induce a consistently well written story…but since you seem to be taken by it, it can’t be that derivative. I really like how its just so fresh and new to me…I haven’t spoiled any plot point, any character death…so I’m basically going in without any pretense to what I’m about to see. Which is refreshingly exciting for once 🙂

I tried to write this post without spoiling anything, so yeah, I hope you love this series, Ivy. It’s one of the best I’ve seen since starting the blog.

Nothing to add, but

I need to own this series, place it on my shelf alongside The Tatami Galaxy and Mushishi.

Wait, when did they start selling Tatami Galaxy sets?

I liked the first two episodes very much. In fact, based on them I had this show at the top of my “must watch” list for the season. They aren’t as shocking as the “holy shit!” moment of episode 3, but the show had dark overtones from the very first scene (Madoka’s dream), not to mention the bizarre visuals, which I liked just as much. At the time I thought “This is better than I expected.” Heh.
As for the comment about the consistent and uncompromising script: right on! There were moments that had me so worried that I found part of me wishing for a Deus Ex Machina, an easy way out. But I knew that the creators would not compromise and that the show would be greater for that.
There are some shows this season that look interesting. You mentioned a couple in the replies. I’d like to add Denpa Onno Something-or-Other, if only for the occasionally witty dialogue, but really, there’s nothing out there now that has me going like Madoka did.

Yeah, I must admit I’ve ended up dropping Denpa Onna… already. True, there’s nothing quite like Madoka in this season, but it’s still a really solid one IMO, and definitely a step-up from the last ‘major’ season in Autumn.

[…] of Madoka Magica has been mixed, to say the least.  While the majority of bloggers and watchers agree that it was a satisfying end to an otherwise bleak series, it wasn’t perfect (the flaws were […]

I think the key thing to remember about Madoka is that it’s an original work (although not solely by Shinbo), compared to Shinbo’s other directorial projects which have mostly been adaptations. In some cases the directorial style maps on very well (Bakemonogatari and Sayonara Zetsubou Sensei) and in other cases it’s a bit more strained (Maria Holic comes to mind). Madoka on the other hand benefits from the fact that it’s an original work – and if anything, I hope Madoka’s success means that we’ll see more originals from Shinbo in the future.
All the recent offerings over the past year have really been impressive too; I’d say the future is looking good.

I share your optimisim for the future, vendredi. I’m actually quite excited to see a return to the style of a series like Tiger & Bunny, which reminds me so much of Cowboy Bebop. We need to see more anime that can break out from the hardcore audience, and stuff like Madoka will be on the front line.

Madoka is a quality watch. It is well executed and directed. But all the hype surrounding it… well it hurts the piece. I mean I was expecting something truly mind-blowing – a true revolution. But it just wasnt there. I did not find the “shocking moment” of episode 3 shocking at all. Instead it was calm and serene. Touching, yes, but we could see it coming. Anyway for me, Shinbo’s genius did not show up till ep 10. Homura’s past was tragic and compelling, even though the creators went for parallel universe and time travel plot devices. And the finale itself? Well it was well explained why Madoka is to become the ONE, but it was kinda Deus Ex Machina-ish (IMHO). And her wish? Someone could have thought of it a million times before, eh? Anyway solid, daring, visually stunning (well, at least the fights were) series – yes. Revolution – no.
PS: great blog bateszi, I ve following it for a while, but never dared to comment (english is not my 1st language, so I was a bit afraid)

You shouldn’t worry about your English, Togusa. Your comment is well-worded and expresses your opinion well.
At the end of day, all this hype surrounding Madoka is something of a double-edged sword. So much of the excitement I’ve tried to get across with this post was conceived as Madoka was airing, when it was still an unknown quantity. As such, the ‘revolution’ wasn’t so much in Madoka itself, as in the people watching it. It definitely gave me hope for the future of anime, if just because people watched and enjoyed a series as creative as this. Watching it now though, it’s just a series. A really good one, but maybe not one as affecting as we make it sound.
So, thanks for your comment, Togusa. It’s always nice to hear from readers! 🙂

Yeah, I was amongst those who dismissed it at first. Then all the positive reviews intrigued me, the darker side of a mahou shoujo’s life lured me in and it being a shinbo work (me being a bakemonogatari maniac) sealed the deal for me. I was really surprised, and, although I half expected THAT moment to happen, I thought it would take longer, and it caught me by surprise. Plus I think that the fact that they didn’t show the ED until that EP really added to that. It was like the show started showing it’s true colors from that moment on.