It’s been a long time coming, but I’ve finally had a moment to sit down with the Mushishi manga. I say a long time coming because I was the most ardent of fans during the anime’s original airing. The 2006 anime holds a special place in my heart. Between it and Eureka SeveN, my faith in quality anime was restored. I could’ve been the typical anime fan, who gives up when they hit some form of adulthood (I graduated high school in 2006,) but because of Mushishi I persisted, and am now the ultra-nerdy woman you see.
And it’s with that sentiment that I let myself sink into the green world of Mushishi once more.

A story is always moulded by its medium in some way. The Mushishi manga is visceral and raw in a way that its anime adaptation just.. isn’t. Yuki Urushibara’s uneven, heavy sense of line brings a different kind of liveliness to the story. If the Mushishi anime focused on the transcendence of certain moments (recall episode 6, Those who inhale the dew), then the manga is focused on the brilliant energy of life, in all its raw, stumbling glory. Whereas one gets a sense of the mystery of the mushi, the manga has a different focus. 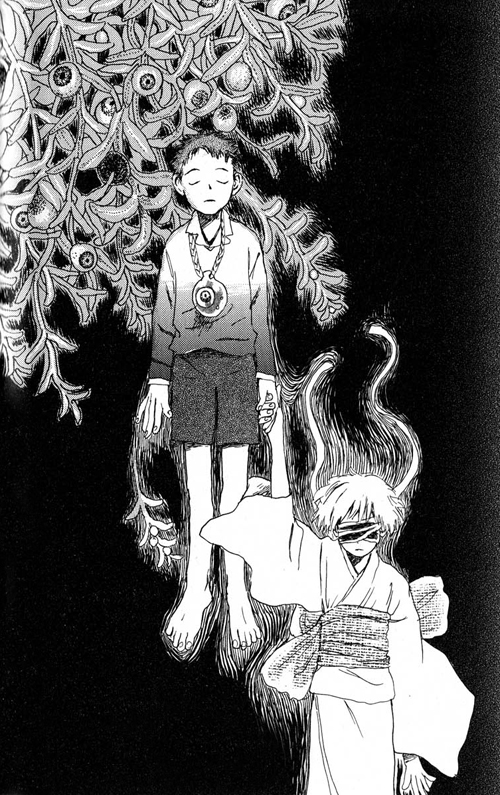 The manga tells the story of the beauty and difficulty of ordinary people, crossing lines with things they cannot understand. The difference being that it’s ultimately about people. People are at the heart of Mushishi, and the mushi just accessories.
Not that I mean to fault the anime by any means here. A challenge of anime is always to convey the same kind of energy as its manga counterpart. Motion is a costly thing. In bringing motion to an image, you have to sacrifice the fidelity of that image – a huge majority of the thousand words it supposedly speaks. In giving the viewer motion, all anime sacrifices detail, fidelity, and the expressiveness of a single line. 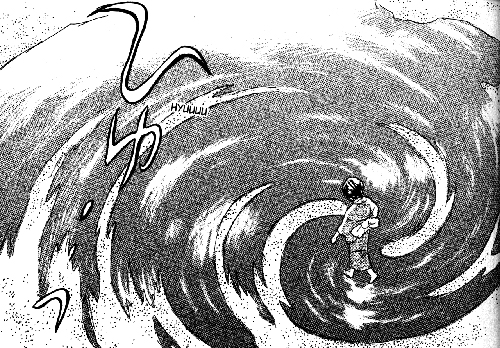 But the mushi are inexplicably more haunting in the manga. Perhaps it’s the lack of motion. Motion, being the domain of living things, is (when done well, as in the Mushishi anime) immediately more palatable – we turn abstract objects, shapes and colors into the form of humans more naturally. 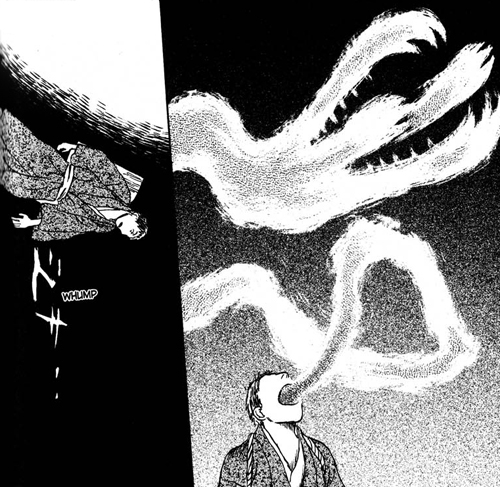 Urushibara exploits this lack of motion – the moments when the mushi invade or vacate a person’s body are palpable and horrifying. Instead of marvel at the mushi, we realize, just as Ginko said, that they’re things to be revered and feared.
The mushi, of course, looking typically like autonomous plants, are registered by our advanced, scientific minds as something like bacteria. We’re familiar with this form, and that mode of movement, and so they aren’t as threatening. In the manga, however, they become alien acts, changing people’s lives in a mere panel.
Though, perhaps as a hangover of watching the anime first, as I read the manga I always heard Ginko’s deep, even voice in my ears. The thing which makes manga so intriguing is the ways in which our senses supplement the images we’re presented with. Our eyes pulse over Urushibara’s uneven lines, and our minds interpret it as motion. 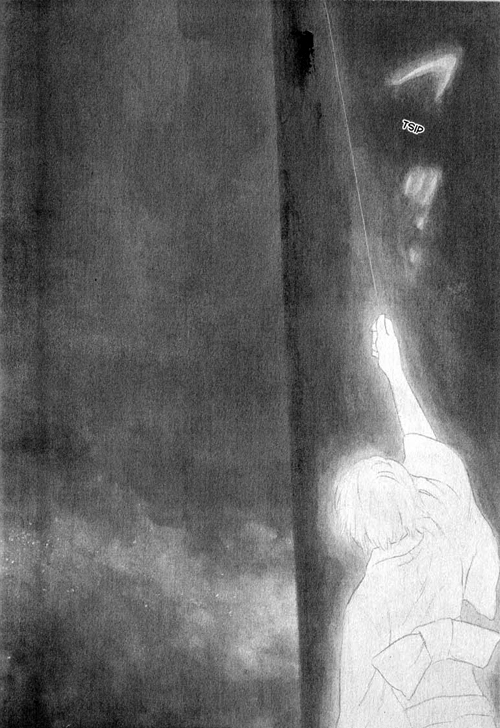 In contrast, Urushibara’s soft water color illustrations barely form distinct enough shapes to be called an image. There’s a sense, both in the anime and manga, that Ginko’s world is always covered in an early morning fog. This lack of distinction between lifeforms (plant and human, human and mushi) is key to the story, and the water colors reflect this especially well. To me, this contrast between the rougher, livelier ink-and-screentone illustrations, versus the homogeneous water colors is the key contrast of the story. Mushishi shows us a world where the lifeforms are at times more distinct, and at times, more incorporated with one another. 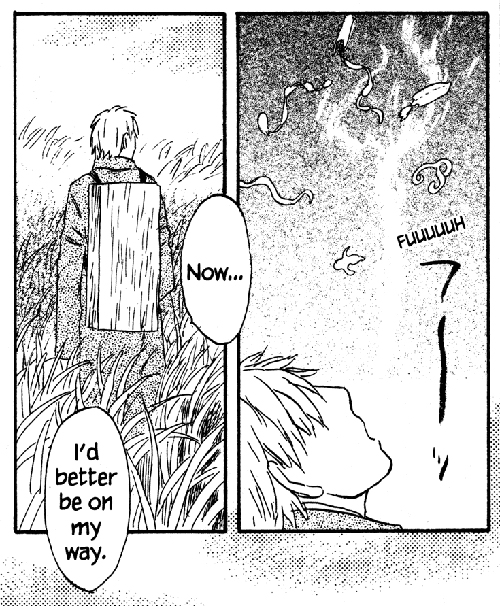 Mushishi, in all its adaptations contains one key element: freedom of choice. It never passes judgement on the mushi, on Ginko’s transient way of life, on Japan, or on any of the characters Ginko helps along the way. Ginko’s final line is true to this tenet. A man carried by the undercurrents of an unseen world; understated, frightening, wonderful.

11 replies on “The wonderous parts of the world”

It looks like there are some lovely visuals in this series, and the Manga images you selected look distinctive and interesting. (My favourite is the first one.) For some reason, however, I’ve just never been able to get into the series — I tried the Anime and the art and general atmosphere was lovely, but it felt somehow limp. It’s strange, because my favourite works are always character heavy, so I have no problem with a slow pace, but when I watched the first episode of this series it felt like I was floating along without really engaging with anything on an emotional level. It seems peaceful and it has a sort of quiet grace to it, but there was nothing that made me want to watch any further. I’m definitely going to try again at some point, or I may attempt to tackle the Manga instead.

Mushishi is a really strange, unique, and incredible anime. Its focus isn’t on character development (like what you’d expect when Celeste mentions people being at the center of Mushishi), but rather on people in general. How they act, how they interact, and how they live their lives. As an episodic show, it’s not going to delve too deeply into fleshing out the characters (or even Ginko himself!), but it does string together enough short stories to let the audience better understand both the world of Mushishi and the real world.
===== SPOILERS AHEAD =====
I believe that mushi are both a fantasy element and a tool Urushibara uses to better display human nature. One chapter in particular shows this quite well: there is a mushi that sucks in animals and humans, forcing them to go into a time loop and repeat their lives over and over again. A man trapped in this loop escapes from it with Ginko’s help, deciding to look ahead to the future instead of trying to change the past. Yet he eventually goes back into the loop as his wife is dying. It’s a story that makes the readers question themselves: “would I do that?” Should humans accept their painful past and live for the future when given a choice like this?
That’s why I love Mushishi. Each chapter/episode has a small twist with a couple of morally hard questions. It’s a show that I still think about years after I’ve watched it, because it’s left such a large impact.

Hmm, I think you’re right on the note of morality. Urushibara definitely uses the mushi as a device to place each of the episode/chapter’s characters (or Ginko) in a bit of a moral gray zone – the ways in which they navigate this zone is what makes it so interesting.
My favorite example of this is still Those who inhale the dew, about the mushi which lives in a morning glory, and makes a person live an die within a day, only to be reborn again the next. When faced with the choice of an endless expanse of time, and the beauty of experiencing life day-to-day, even though she knows it’s wrong and there will be side affects, she chooses to re-inhale the mushi. It’s easy to peg this action as taking the low ground, but i think the point Urushibara makes in all of this is how hard life is. We live only so long, and we struggle the entire time – when given the option, often we take the ‘easy route’; even though the easy route is a thorny one as well.

Mushishi is definitely a different beast to engage with – you need to sink into a mood. It’s funny because both the anime and manga are very cerebral in their execution, and in the way that they display their characters, but you almost have to turn off your mind while watching it. Not because it’s stupid, but because it’s so well-crafted that you don’t need to worry about finding meaning for yourself, it’s delivered to you by the author in a very beautiful manner. There aren’t many authors, mangakas or directors who are able to do that in such a complete and elegant way as Yuki Urushibara.
So go read the manga! 🙂

Mushishi ahh its been always on my to-read/watch radar for so long.. I’ve haven’t really got about to do it.. I think i really should after you remind me again…

I LOVED Mushishi when it was originally broadcast. The anime remains one of my favorites. Simply beautiful (both visually and aurally). Pure magic. I’ve read the first couple of chapters of the manga but didn’t get any further. The story was essentially the same but I didn’t get the same immersion experience as I did from the anime. I’ve thought about trying again (and maybe I will after reading your review).

I know what you mean about the immersion experience, Mushishi was well sound designed, and sound is vitally important in creating a sense of immersion. In many ways, it’s more important than visuals, because it creates a sense of atmosphere, whereas visuals deliver information.
What I would encourage you to do, in reading the manga, is learn to truly appreciate an image. Look at its balance on the page, on the shape of the panel and what that might mean (sharp angles = tension, low, wide rectangles not so much, full page spreads, etc.). The shape of the lines, as well as the character of the shading (screentone versus cross-hatching). Learning to read an image is a wonderful thing to do, and you’ll find that it becomes the kind of thing that you ‘can’t unsee’ so to speak once you learn.

Very remarkable things here. I’m very satisfied to see your post.
Thank you so much and i’m looking forward for the next one..

Interesting opinion… Me, I could never get into Mushishi the manga. I didn’t start with the anime – I’d come across the manga before seeing the anime, but I felt that the art lacked something that I can’t really put my finger on. Maybe it’s because it’s rather far from my personal preferences and interests, though that alone is usually not enough to make me put down a manga. (Unless the artwork is simply boring, but that’s not the case here.) I’ll try to have another look at it sometime, though seeing the images posted here I yet again feel that somehow something is missing.
By the way, I’ve always thought that the anime was absolutely brilliant. I never felt that it sidelined the human aspect in favor of the mushi. The way I saw it, humans and mushi were being portrayed as being part of something big and interconnected, the human stories interwoven into the world around them.

Beautifully written post – really evocative. I’ve only seen the anime, but you have made some really interesting points there and I will consider looking up the manga at some point 🙂

[…] hold. I give us two years until the apocalypse, but in the mean time, there’s not only a new Mushishi series on the way, but a Masaaki Yuasa adaptation of Taiyou Matsumoto‘s amazing Ping Pong […]