bateszi: The hope is that this post will be the first in a new monthly feature. I say ‘new’ as if we’re bursting with regular features here, but no, this is more like our first attempt to do anything that isn’t a one-off blog post. Awkward introductions aside, then, welcome to the rare sight of another (and long-overdue) group post on this here blog, which collects our varied thoughts on Blue Exorcist, Toriko, AnoHana and Denpa Onna to Seishun Otoko.

dengar: Sometimes you just want mindless shounen fun. I like to call this ‘anime candy.’ Blue Exorcist is such a show, it does not have an original story or a main character with emotional depth.  What it does have, is that elusive, addictive quality that keeps me watching shounen series. Here, that quality comes from dramatic irony. Rin Okumura is a demon, and not just any demon, he’s Satan’s son. Ironically enough, he goes to a school that trains exorcists to destroy demons (talk about daddy issues!)  None of his classmates know his identity and they would probably kill him if they did.  The information gap, between what the audience knows and what Rin’s classmates know, leads to some delicious situations.

The other reason I liked Blue Exorcist is that Rin avoids my biggest pet peeve with shounen leads, their tendency to lack any self-restraint.  He knows enough not to accept stupid dares that might reveal his identity.  He still makes mistakes and acts rashly (he is a high school student after all) but at least he knows not to act in ways that would betray his secret.  I think this makes Rin, and Blue Exorcist by extension, more authentic.  Still, remember to judge this show in context, it is and will always be a shounen show, more anime candy than a meaty main course.
bateszi: I really wanted to like Blue Exorcist, but after 3 episodes (and in a season with a lot of promise elsewhere,) the series felt altogether too mediocre for me to keep up with. Talking of this season’s shounen anime though, I have to say I’m loving Toriko more and more, which channels the classic Jump-spirit of Dragonball and One Piece, with a fun-loving main character going on adventures around the various islands of the Gourmet Age, where curry spills forth from the ground like water and pancakes grow on trees like apples! And there’s cyborgs, to boot! What’s not to love?! 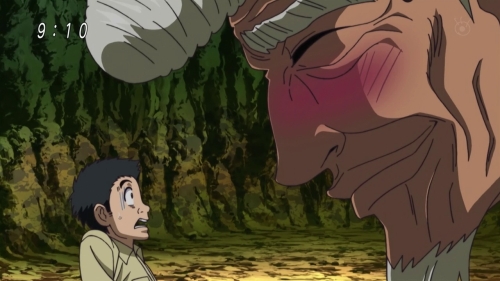 Well, Toriko‘s all about eating exquisite foods, and that includes eating animals. It’s a very cartoony series, but there’s still a part of me that cries out in sympathy for the animals killed on-screen. Toriko, at least, follows his code of only killing animals he intends to eat, but you get the idea. 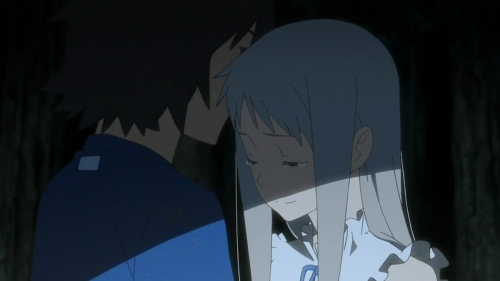 bateszi: If Menma were alive, AnoHana would be a completely different series. It would, in fact, be a generic high-school romance, but she’s dead, so it isn’t. We keep seeing these flashbacks to the characters’ childhood hang-outs. If they had grown up as they were back then, Jinta would’ve hooked up with Menma and Anaru would’ve been the book-ish girl always in somebody else’s shadow.
It’s like watching a version of Toradora! where Taiga died before the series began and Ami became Ryuuji’s love interest. Everything’s all messed up because the main character died before the series got started, and everything we expect of the genre was prematurely cut-off. Anaru was only supposed to be a side-story and Jinta was supposed to be woken up every morning by Menma shoving breakfeast down his throat, but none of this happens. AnoHana is a broken anime.
Celeste: AnoHana, as much as I enjoy watching seems to do nothing but draw comparisons to other anime – Honey and Clover for its visuals and general mood, Toradora! for its setting and portrayal of teenage angst. These are both good series, so by no means are these comparisons an insult. 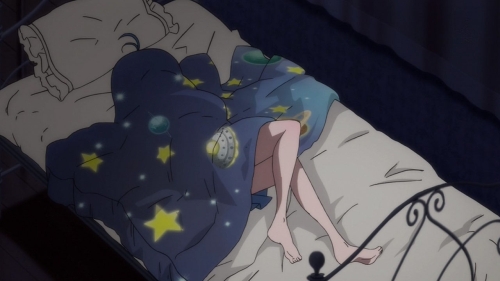 Celeste: I’m pretty dreadfully behind on it, but I’m still watching Denpa Onna to Seishun Otoko. I was originally going to write about another series, but I realized on the bus to work this morning that Denpa Onna, as well as Akiyuki Shinbo’s other works all seem to revolve around a central tenet: the male protagonists’ obsession with some form of perfection. For Makoto, this perfection is the idea of his seishun (youth) points, which he tallies up at the end of each episode. He has a stark obsession with experiencing certain stereotypical moments in youth.
As a brief survey of Shinbo’s other works in terms of this male obsession with perfection: Le Portrait de Petit Cossette is obviously the shining example, as the male protagonist is sucked into a vortex due to his obsession with the perfect, crystalline Cossette. Arakawa Under the Bridge‘s Kou is another obvious bet. Shinbo has positioned himself rather uniquely in terms of his audience: on the one hand, he directs in a very auteur manner, on the other, he has considerable mainstream success with the stereotypical otaku audience.
Also: that opening theme song. I don’t care if her voice grates, I think it’s fantastic.
bateszi: So, that’s it from us, but what are you watching at the moment? Please don’t be afraid to drop-by in the comments to let us know!