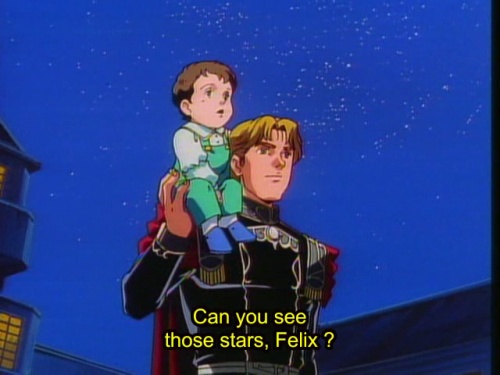 During the very last scene of Legend of the Galactic Heroes, baby Felix gazes up at the night sky and grasps at the stars. “That might be an action that’s been repeated endlessly in any era, in any world,” the narrator poetically explains, adding that “Humans always pursue things that they can’t reach”, yet the knowing expression on Mittermeyer’s face is almost heart-breaking, “Felix, you too…?” This is, perhaps, the most emotional moment of the entire series, expressing everything that there is to love about Legend of the Galactic Heroes in a matter of seconds.
Alas, that isn’t enough. There is still so much more to say, so much more to explore. Hoping that more people may discover this fine series, and, perhaps, to dip myself into this story for one last time, I have carefully composed this (chronological) list of highlights from the series, but be warned, it contains massive spoilers. 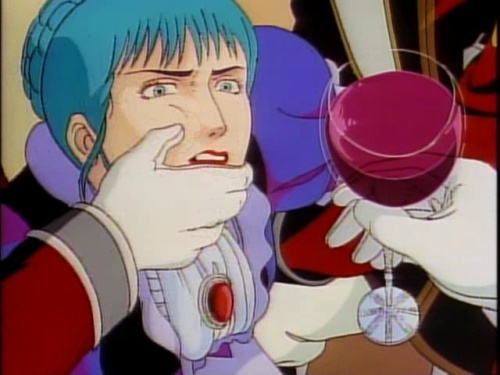 1. Fall of Marquise Benemunde
As the Goldenbaum imperial court looks on with heartless disdain, the screaming Marquise Benemunde is restrained by the Emperor’s guard and forced to drink from a glass of deadly poison. Her bitter end was the result of her desperation to reclaim the love of the Emperor, which she had lost forever to the beautiful (and much younger) Annerose, Reinhard’s beloved older sister.
The sheer indignity of this scene, combined with the casual formality of the court’s impeccably dressed on-lookers, is so pointlessly cruel and chillingly orchestrated that one is left in little doubt as to the morality lurking within the aging Goldenbaum ranks. 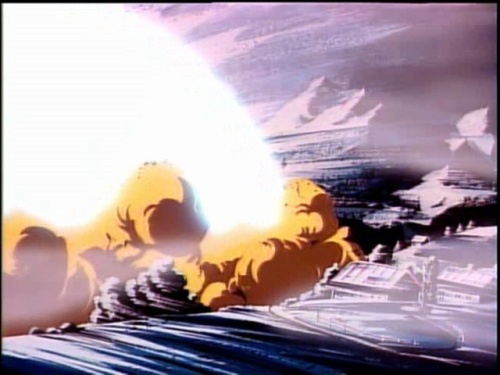 2. Westerland nuke
Due to a small rebel uprising, Prince Braunschweig launches a massive nuclear strike at planet Westerland, intending to incinerate millions of innocent people. Reinhard’s immediate response is to intercept it, but his war-time adviser, Oberstein, suggests that he should just let it happen, as the public’s reaction to such an atrocity will swing the empire’s popular support in Reinhard’s favor, exposing the Prince and his allies as irredeemable villains. Reluctantly, Reinhard agrees and Westerland is decimated. Millions die as a means to an end.
This is the kind of political versus moral quandary that has no right answer. If Reinhard had stopped the strike, he could be dragged into a war of attrition which could claim millions of soldiers over a period of months (and even years, perhaps), but by allowing it, his rise to power is swift, albeit, forever tainted with the blood of Westerland. Neither is an easy choice to make, and for exactly that reason, we have a thrilling tÃƒÂªte ÃƒÂ  tÃƒÂªte between leaders, who, very literally, can forsake or save the lives of millions with one word. 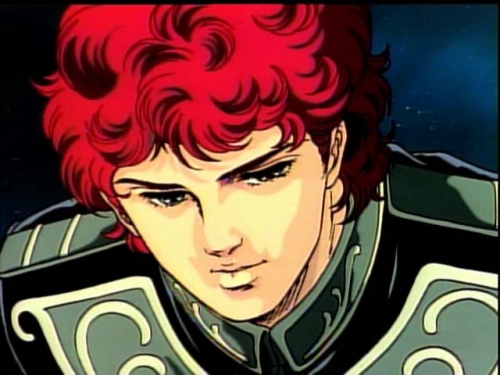 3. Kircheis’ death
One of most shocking moments in Legend of the Galactic Heroes is the sudden death of Siegfried Kircheis, Reinhard’s dearest (and perhaps, only) friend. Up until this moment, he was one of the main characters, an uncommonly benevolent military commander who had spent his childhood with Reinhard. They dreamt of a better future together and were devoted to toppling the corrupt Goldenbaum dynasty, so his demise is tragic and ill-timed.
He is killed by Prince Braunschweig’s chief retainer, Ansbach, who pulls a giant weapon from within the Prince’s dead body but misses his main target, Reinhard. Kircheis tries to restrain Ansbach and is mortally wounded by the assassin’s then-concealed laser ring. Within minutes, he has bled to death. A stunned Reinhard is unable to accept what has just happened, and it scars him for life, as well as delivering a massive blow to his sister, Annerose, who had been secretly in-love with Kircheis this whole time. It’s a moment that Reinhard regrets for the rest of his life and drastically alters the complexion of the story. 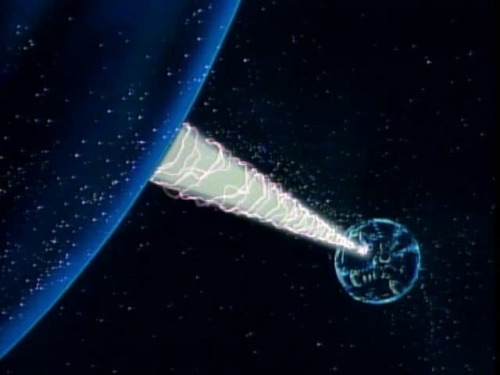 4. Geiersburg fortress vs Iserlohn fortress
There is something innately thrilling within the sheer spectacle of seeing two planet-sized, Death Star-esque fortresses, Geiersburg and Iserlohn, do battle. Credit is due for the audacious imagination required to even consider moving Geiersburg within seeing-distance of Iserlohn, while the battle itself is gob-smacking. Between the tomahawk-wielding Rosen-Ritter skiing across Iserlohn’s liquid surface, ripping apart Imperial soldiers as they do, and tactician Yang Wen-li’s brilliant trump card, leading to the destruction of Geiersburg via Iserlohn’s lightning strike, a.k.a Thor hammer, one can only conclude that this is epic anime, and it is awesome. Just think, this is what Star Wars could have been. 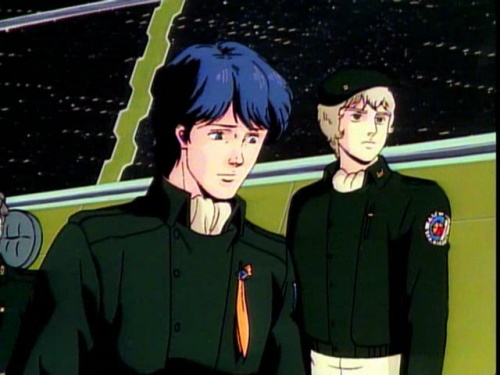 5. The Battle of Vermillion
The defining moment between Reinhard’s Imperial rise and Yang Wen-li’s democratic Alliance is in the Battle of Vermillion.
Having blasted his way though line after line of Imperial defenses, Yang’s fleet has finally trapped Reinhard’s ship, the Brunhilde, but at this most critical of moments, Yang receives an order from his superiors (millions of miles away on his home planet of Heinessen) to surrender and, to the horror of many, he calmly acquiesces.
Thus, despite everything that he (and his Alliance) stands to gain from killing Reinhard, he won’t allow his command to override his government’s order. Walter Von Schenkopp urges him to fire and think later, to consider the history of the universe, Yang could even pretend to not have received the message in time, but he steadfastly refuses because to create such a precedent in history would forever undermine the strength of democracy in the future. Hence, many more lives are lost because Reinhard survives, but Yang’s loyalty to his political system is admirable. He isn’t at fault; it’s just bad luck that his government happens to be incompetent. 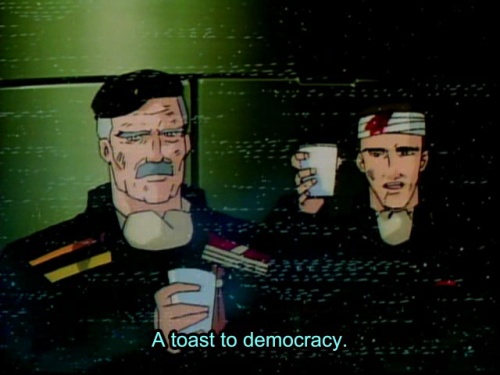 6. The Battle of Marr-Adetta: Bucock’s end
At the Battle of Marr-Adetta, Old Admiral Bucock meets his maker. Battle-weary, yet too old to do anything but fight, he evacuates his remaining soldiers before rejecting Reinhard’s offer of mercy, instead choosing to go down with his ship. His final speech to Reinhard blazes with the kind-of respect and pride one can only feel for a man who has seen it all. He closes with a toast to democracy, composed as he tastes the last wine of his life, completely and utterly unshakable in his belief. It is a brave man’s end. 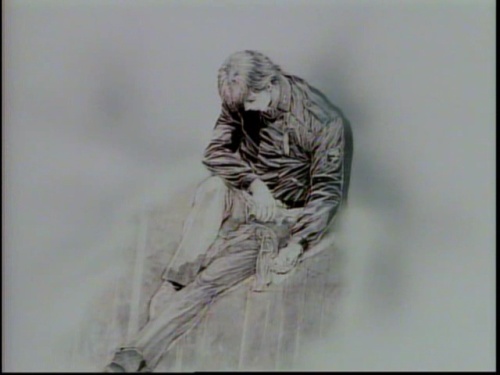 7. Miracle Yang became Bloody Yang
For such an influential person, the irony of Miracle Yang’s death is that it’s not glamorous in the slightest. His luck merely runs out, as, having been shot through the leg by an unnamed terrorist, he bleeds to death in some dark corridor, alone. This is such a tragic and lonely way to die, but even still, his last words are an apology; all this time he has carried guilt for every life lost under his command.
His departure affects friends and enemies alike. Reinhard loses his last reason to fight and decides to retreat from battle, while Julian Minci, Yang’s dearest student, flies into a bloody rage before eventually helping to establish the Iserlohn Republic Government, leading their military in The Magician’s shadow.
Yang Wen-li’s presence constituted one half this story, his life, his love and his brilliance is documented through out the first three seasons and, like Kircheis’ sudden death, his shocking exit monumentally shifts the tone and direction of Legend of the Galactic Heroes. 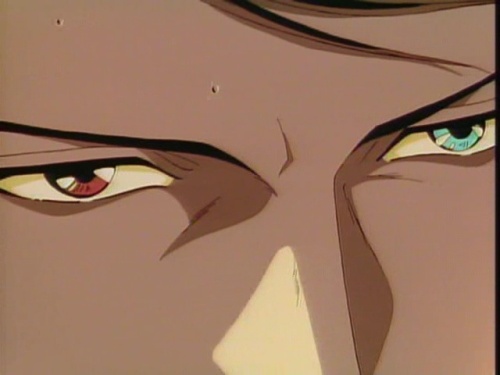 8. Reuental’s rebellion
In the words of his best friend, Wolfgang Mittermeyer, Oskar von Reuenthal was “drunk with blood-colored dreams”. Somewhat carelessly, he rebels against Reinhard as if it was always his destiny, the very purpose of his life, but he loses the battle and dies.
Reuenthal was born with a rare eye condition called heterochromia iridum (both eyes are a different colour), which was used as proof that his mother was an adulterer. She committed suicide, but not before attempting to violently gauge out one of her son’s eyes! His father started drinking and blamed the young boy for everything that had transpired. Reuenthal never escaped this past and developed a taste for self-loathing; particularly strange was his relationship with Elfriede von Kohlrausch, who superficially hated him, despite carrying his child. His rebellion, and ultimately, his death, were all linked to this sad story. Reuenthal always wanted to be loathed, to be the villain. 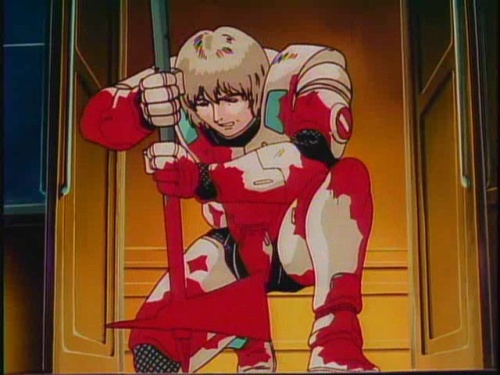 9. One final battle
Many great characters die in this final battle, Merkatz and Schenkopp amongst them. They sacrifice everything to create such a tiny opportunity for Julian to meet with Kaiser Reinhard face to face. Overwhelmingly, this feels like a battle of despair and hopelessness, with an almost suicidal agenda, every passing minute heaping on yet more death and grief, but finally, his moment arrives. Julian staggers forth into Reinhard’s quarters, barely able to stand from fatigue, covered with the blood of dear friends and hated enemies alike. And then they talk. This is a scene of quiet wonder. 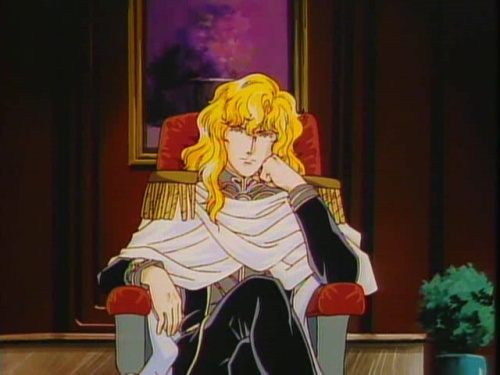 10. Reinhard’s death; a sword has no reason to exist but as a sword?
Reinhard von Lohengramm is the Edmond Dantes of Legend of the Galactic Heroes, a peerless avenger and prideful leader of men. He dies from a terminal illness, just two years into his reign as Kaiser, aged 25, said to have burnt away his life to fight. The end of his life marks the end of this great story.
Joined at his death bed by his beloved sister Annerose, she whispers “You haven’t had your fill of dreams, Reinhard?” “No,” he replies, “I had plenty that no one had ever seen before.” One can’t help but wonder, what could they possibly contain?
Reinhard’s greatness lies in the guilt he feels over Westerland, the regret that marks his every move after the death of his dearest friend, Kircheis, and the loneliness and vulnerability that eventually sweeps him into the arms of Hilda Mariendorf, with all the delightful romantic naivety that follows. He is a great character and, more importantly, a likable person.