Anyway, the ‘real robot’ genre is one that takes the concept of mecha and anchors it within a story that is built on consistent, logical foundations. I’m saying this because I want to emphasize that Layzner is ‘hard’ science fiction. It has a deep story with names, places, alien races and foreign technologies. The mecha is just another element of that world, not the centre of it. 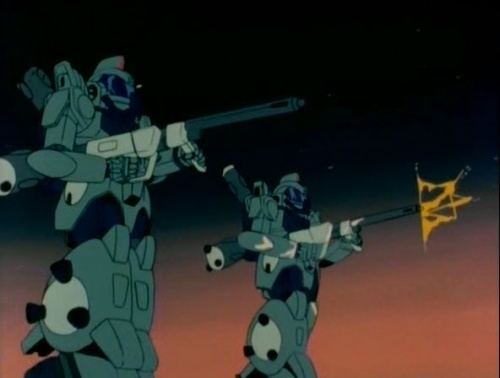 The series begins in an alternate reality 1996. Man has raced into space and installed outposts on Mars, but the Cold War still rages on and relations between the US and Russia are tense. The United Nations has itself a base on Mars and the story begins proper as a group of new students from the UN arrive on Mars to help keep the peace. From this point on, things go badly wrong, as a trio of unidentified hostiles descend on the UN base with a vicious intent.
Right there and then, the vast majority of the base’s inhabitants are killed, including many of the new students, and amidst the carnage, this one particular scene jumps to mind. The people in the command center are baffled by what is happening and plead with the attacking mecha to retreat, but in response, one of them simply turns around, looks straight at the building and blows it away. So quick, so devastating, everything that I thought I knew about this anime was destroyed in that very moment, too, and this was just the first episode; it was uncompromising, intense and thrilling. 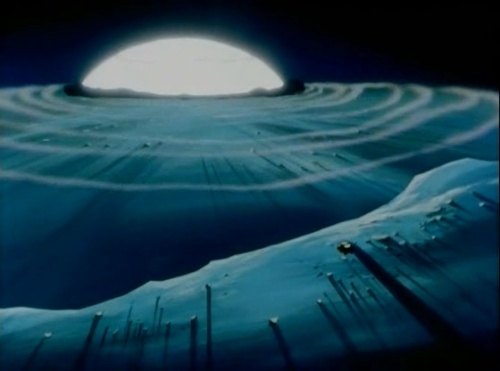 This attack is just the beginning of one long and hard ordeal for the survivors. Cut adrift on Mars, they have to slowly scythe their way across the planet’s barren landscape to reach the distant US base, but meanwhile, confusion reigns as both the US and Russian governments blame each other for the destruction, culminating in yet another breath-taking scene. The remaining survivors are overjoyed to have finally sighted the US base on the horizon, but within seconds, their joy is replaced by horror, as a Russian atomic bomb rains down on the US base, incinerating with it what little hopes the survivors had left of escaping.
The plot unfolds in a very methodical, heat of the moment style. 9 episodes in, the survivors are still stranded on Mars, living every hour as if it were their last and fending off attack after attack from the ‘foreign’ hostiles. You see, that they are still alive is exactly the problem; if they can just get a message to Earth, they can warn mankind that a huge invasion force is heading their way!
That, then, is ‘Blue Comet SPT Layzner‘, a dark, fascinating and thrilling science fiction anime that I have to recommend. It’s from 1985, but the animation and general sense of story-telling is timeless. I’m aware it’s annoying that only 9 episodes have been subtitled, but unless more people show an interest in this series, I suspect we could be waiting forever. Layzner is too good to wait forever. Watch it, write about it, do whatever you can. Trust me on this, it’s worth the effort.

9 replies on “For your consideration, Blue Comet SPT Layzner”

Oddly enough I feel a certain nostalgia for science fiction that dates itself in the nineties Ã¢â‚¬â€ this is odd because I’m too young to have experienced it the first time. There’s something about a story which sets itself in a future which has already not happened. I don’t know if I’m happy to begin watching Layzner with no sign of subs on the horizon, but it certainly has a good reputation. I’ve read claims that the second half of the show plays on the history of the Japanese occupation of Korea Ã¢â‚¬â€ with the aliens being Layzner‘s Japanese.
We discussed the relative merits of VOTOMS and Gasaraki on MAL, but reading your detailed description of Layzner‘s beginning, it strikes me that you might want to try another 80s ‘real robot’ show, Vifam. I’ve been trying it out recently, and its beginning is definitely similar to your description of Layzner‘s. It’s certainly similarly willing to unleash widespread destruction, and it has a fairly hard sf approach, too, with spaceships making timed burns to achieve particular orbits. It might be aimed at a younger audience though. Anyway, it’s not fully subbed but it’s nearly there, and I think people are working on it.

Very interesting. I’m thoroughly enjoying FLAG right now so I can see how this show can rock hard. I will look out for this now, also Vifam.
I also second Iknight’s nostalgia for future history that has already not happened. I’m experiencing this acutely right now, since 2009 is the year when Macross’ great space war happened. (right now the Macross should be somewhere around Saturn ^_^)

Layzner is one my list for quite some time but until a while ago there was no one subbing it but i saw that ACR is subbing it again so that’s great news,anyway after reading your post i want to watch it even more now,it sounds even better than i expected it to be.
Also i have to say that i am really happy to see that there are quite many people lately who are interested in older anime and also it is nice to see that there are fansub groups out there who try their best in releasing them.

@IKnight: Cheers, Vifam is now on the ‘Plan to watch’ list too. I don’t know why this is, but I’m finding myself more attracted to the ‘classic’ anime these days. Ironic, considering the time of the year.
Also, it’s fascinating to hear about Layzner’s allegorical/historical inspiration, and as for nostalgia for ‘period sci-fi’, I hear ya! And it’s not just in anime, either. Some of my favourite films are ‘Cold War horror’, like Invasion of the Body Snatchers and The Thing. I guess a genuine fear for one’s life is quite the inspiration?!
Anyway, I think I’ll always love sci-fi that has something to say, with anime like Infinite Ryvius being a prime example of that; an exciting story with fascinating ideas and situations. It’s all about the situations.
@ghostlightning: If you ever watch Layzner, write about it. Oh, and you remind me, I still haven’t seen the original Macross TV series; another one I’m desperate to watch!
@Akikaze: Yeah, exactly. It’s so heartening to see the odd fansub group working on something like this. They do it knowing that it won’t be popular, so it’s out of a pure passion for the anime they love. I suppose I find their enthusiasm is so infectious, and the least I can do is write about it. I can only hope that more people are willing to dig into the classics. The anime community has grown ten-fold over the last decade, and, perhaps, as this new generation of fans matures, they’ll start looking at anime like Layzner more often? There is so much good anime out there just watching to be discovered.

Most of my friends have difficulty understanding how I can enjoy movies and shows that are older than myself, but for me the age of what I watch/read/play/listen never mattered. Unfortunately, I haven’t seen nearly as much old school anime as I’d like to, hopefully this will send me in the right direction.

Thanks for pointing out the series (even if it’s not completely sub’ed) – it’s always nice to unearth another gem berried in the pre-2000 sands.

And just like that I’ll be watching the episodes of this series I can find this weekend. I’ve fallen so royally behind in everything since this semester is kicking my ass. Gotta catch up on your posts too!

[…] subtitling work on Blue Comet SPT Layzner recently restarted, which is some compensation for the work on Dougram grinding to a halt (the Lord […]

[…] Crybaby, but it’s also a lot harder to track who worked tirelessly to translate Blue Comet SPT Layzner and Panzer World Galient. These types of anime feel harder to discover now than ever, and as we […]