I’ve read only 26 chapters of Vinland Saga so far but its quality is such that I have to admit it’s already one of my favourites.

Thorfinn is the main character, an Icelandic warrior joined with a band of Viking mercenaries sailing the seas of Europe and sacking the villages and cities of Norman France and England. His talent as a fighter is chilling, if just because he’s still just a small boy!

This had me hooked straight away. You have this kid (a rag-doll, really) fighting in a bunch of gruesome, heavy battles, cutting the throats of soldiers and decapitating their Captains for the rewards.

It doesn’t shy away from the violence or cruelty of the infamous era of the Vikings, but there’s more to it than just brutality.

Thorfinn is out for revenge. His father, Thors (a prestigious warrior himself, known affectionately as “The Troll of Jom”), was murdered by the very same band of mercenaries that Thorfinn now finds himself amidst. He’s after the life of their leader, Askeladd, but every time Thorfinn challenges him to a duel, he loses; still too young.

The late Thors became a pacifist after the birth of his first child. The last thing he would have wanted would be for his son to avenge his death, but the boy’s anger is blind, and fierce. He doesn’t enjoy the killing or pillaging, but is willing to do whatever it takes to get at his father’s killer.

One is fascinated by Thorfinn’s sense of morality (or lack there of). In a stand-alone chapter, his life is saved by an English old lady, who then takes him into her home. She nurses him back to health, refusing to believe that he’s bad, but later that same evening, Thorfinn fires a signal to his Viking comrades waiting out at sea; they sack the village and kill the old lady. Thorfinn warned her to leave, but she stayed and watched him beckon in her destruction. 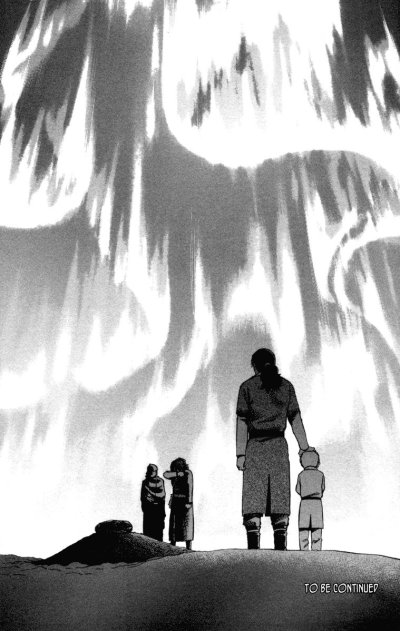 Revenge, but at what cost? The image of her standing there freezes Thorfinn in his tracks for a moment or two, but it’s too late, his goodness is being carried away by the tide of violence.

Yet there’s so much more to Vinland Saga. Agendas, politics, war and culture, Makoto Yukimura weaves his story into larger historical events, introducing people renowned for millennia since; one is Cnut the Great, first appearing in Vinland Saga as a shy and sheltered bishonen, yet destined to become the Viking King of England!

It’s interesting to note that the same Yukimura also created the excellent Planetes. To have jumped so seamlessly from science to historical fiction is to be commended, as is the consistent quality of his storytelling, his eye for realism, the ability to craft a deep environment and then to fill it with evocative character-driven images and natural wonders like the Northern Lights. This is a great read.

5 replies on “The tide of violence”

Awesome! I more or less feel exactly the same way you do about Vinland Saga. I’ve read all of the available scanlations as soon as I could get them (seeing as the Planetes manga is one of my favorites), and I’m so glad I did! I wasn’t sold on the historic setting but the story is told so naturally I couldn’t help but become a fan.
While there is plenty of action the author sets it all up so that it makes sense and every fight isn’t groan inducing. It also helps that the art is fantastic.
I hope they release translate this and release the volumes, I’d buy it in a heartbeat.

Was waiting for the inevitable blog post, glad you’re enjoying it though, it’s a great series, I might try and catch up soon, not sure how far you are now, but Askeladd is so awesome. Although… some of the fights in the series are fairly unrealistic, it doesn’t affect the setting, just seems a little less believable at times.

@neobanzia
Same here, I’d love to have Vinland Saga on my book shelf! And I’m going to start reading the Planetes manga as soon as I’m caught up with the latest chapters of this. 2 weeks ago, I knew nothing of Makoto Yukimura, but now, he’s already one of my favourite mangaka; Vinland Saga is like everything I ever wanted to read.
@Shirogetsu
I’m now up to chapter 42, which is where Canute takes charge and reins in Thorkell. Askeladd is awesome because he’s an old man yet able to chop a guy in half with his sword! Still, we must remember he also condones the massacring of an entire village. That’s something I really like about Vinland Saga, the way it depicts Vikings is admirable and cool, but hardly-rose tinted; you know you’d be shit scared if these guys knocked on your door!
***
BTW, apparently Mel Gibson is making a Viking film! If it’s as grim as Apocalypto, I’m so there.

Hi! I’ve only commented once on here before but I thought I’d let you know that after reading your high recommendations of Vinland Saga, I blazed through all of the scanlations currently available (61 I think). It is just as good as your entry describes–thank you for giving me such a satisfying read! I think the transformation of Canute is probably one of the most profound events I’ve read recently in fiction, in contrast to what happens to Thorfinn… I’ll leave that open-ended in case you haven’t caught up yet. Great series with a lot of depth; it’s a shame that updates are monthly 🙁

Thanks for saying so, Lime.
I’ll be caught up soon, just trying to savour every last remaining chapter!