Watching anime for a long time (I’m talking years, really,) one can fall into certain patterns of viewing. I’ve grown accustomed to knowing what I like, and what I don’t, and picking the anime I watch according to my own tastes. There’s nothing wrong with this, it fundamentally makes sense, but it also leads one to miss out on certain shows that don’t immediately conform to my personal set of ‘requirements’; not every series is as easy to dismiss as I would like to believe (thank god,) therefore, I have devised a cunning plan.
Every one cour TV series released in the last 10 years (that’s rated over 7.5 (out of 10) on MyAnimeList) is pasted into a numbered list of my own making, from which I’ll then choose what to watch by using a random number generator.
That may sound like a really crazy way of doing things, but it’s actually liberating in the sense that it removes any innate biases from the process and just gets me watching the type of highly-rated anime I’d otherwise never bothered to look at twice. In Maria+Holic, I’ve finally seen my first ever Akiyuki Shinbo (plus SHAFT) series, and then, immediately after that, fate saw fit to point me in the direction of Kannagi. 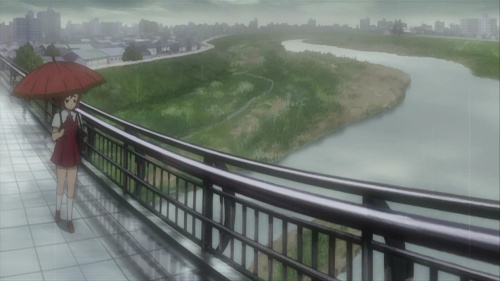 For a time in 2008, this was the show the anime community was talking about the most, but for me, it looked like just another in a long line of cute-looking harem romances. That’s hardly my favourite genre, and having now seen the whole series, I can’t lie, Kannagi is exactly what I just described, which is no judgment on the quality of the show itself, but you’ll be pretty disappointed if you go into this expecting anything other than a bunch of high-school kids having fun and getting into shouting fights with each other. It’s not subversive in that sense, it won’t surprise you by being something it obviously isn’t, yet it’s crafted with enough care and nuance to suggest that the people working on it are enjoying making anime, loved these characters and wanted to do something with them; a combination that invariably makes for good anime, and, indeed, the last four episodes of Kannagi are great. 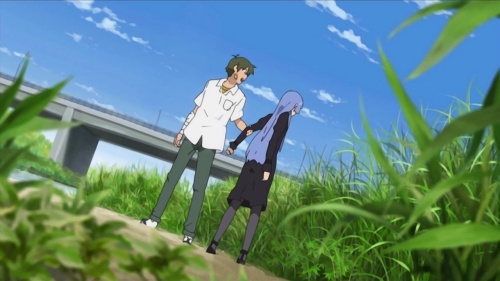 Following on from a delightfully uncomfortable (episode-long) adventure into a karaoke bar, the plot comes to the fore and takes a sudden existential twist as Nagi (the girl with the blue hair) is forced to question her forgotten past and fathom her purpose in life (after all, she’s supposed to be a Shinto god incarnate.) When she suddenly disappears, life becomes bleak for the others; nerves are frayed and the veil of good humour is lost to sleepless nights and a sense of complete and utter helplessness. It’s absorbing and I just wish the rest of Kannagi was as focussed.
Those last four episodes could make for a great drama in the same way that The Girl Who Leapt Through Time was a great drama, alas, the preceding 8 episodes are kind of empty. At the highest points of these earlier episodes, the series recalls the geeky comedy and pathos of Genshiken, especially when the characters visit places like a maid café, dress up and act all embarrassed, but mostly, it’s just long stretches of zany comedy and risqué school antics with the minimum of plot and character development tacked on at the end of each episode. 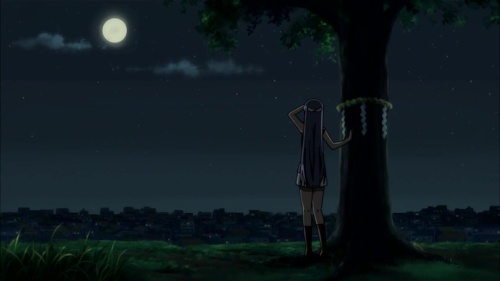 It’s frustrating because Kannagi’s spiritual side is fascinating. One of things that initially kept me coming back was the ending theme, a really beautiful, soulful song that hints at the magical depths of a story we only snatch glimpses of until the finale kicks in. The images I’ve chosen for this review will, I hope, reflect that mystical, darker side of the series, for they are the moments I loved the most.

14 replies on “The curious case of Kannagi”

I came across Kannagi more or less out of curiosity regarding what everyone else was watching that season, but I think your number generating game is probably a better way of finding nice new things than pure crowd-following. I suspect following weekly bloggery consensus as opposed to general consensus regarding quality creates a bias toward light comedy. Having consciously chosen to follow the bloggers into one of their lightweight comedies I felt rather let down by those elements you enjoyed the most, since I’d signed up for community lols rather than mystic angsty girls.

Yeah, I can see that, there are definitely different ways of viewing a series like this, and looking back on it now, I suppose a fundamental problem I had with Kannagi is that I just didn’t find it very funny, the humour too light and broad for my tastes.
Those last episodes were my salvation from that cycle of plotless funnies, but I can see how taken at just one episode a week, the sitcom-esque format becomes easier to take at face value. Just that alone, though, would make for a quite forgettable and superficial show, in the same way that a lot of these moe-inflicted comedies seem to completely drop off peoples radars once a new season begins. Kannagi, to its credit, at least tries to dig in a bit deeper.

I also wish Kannagi had done more with it’s spiritual side, more akin to Kamichu.
Much of the manga I read either doesn’t get made into anime or I read after the anime. Kannagi was a rare case where I had read the first 10 chapters before I knew an anime was on it’s way and I liked those first 10 chapters so I was looking forward to the anime. And I think knowing the manga hurt how I liked the anime because I thought the anime was a very poor adaptation. The director of Kannagi was the guy that KyoAni fired after episode 4 of Lucky Star and this was his first work after and it really felt, at times, like he was using Kannagi as Lucky Star 2.0 to prove he shouldn’t have been fired. Also, he inserted most of the fan-service in the show, it wasn’t there in the manga chapters I read, which I thought upset the balance of the show (panty jokes one minute and serious stuff the next is impossible to pull off well).

Ahh, that’s an enlightening nugget of info. I’ve heard a lot about director Yutaka Yamamoto in the last few years, but I’m not sure what to think about him adding fan-service, etc, to the show. It sounds like I should look into the Kannagi manga at some point.

I didn’t watch Kannagi when it first started airing because I too thought it was just another cliche harem-esque series. Fundamentally, that’s what it is, but to me there’s something refreshing about the humor and the way the characters are portrayed. The animation is great, as is the opening song! I loved the anime so much that I read the manga raw. I really hope the series goes off hiatus soon!

I definitely wouldn’t want to see another 12 episodes of the same thing again, but these characters and their world, inc. all the spiritual stuff, is deep enough to provide some possibly interesting new directions for a sequel to go down. I’d love to see it delve more into the other-worldly side of Kannagi.

It’s a pity we may not see more of Kannagi – apparently the author of the original work has gone into hiatus.
I think what makes Kannagi a refreshing change from harem set-ups is that fundamentally there are only really three choices for our protagonist, and though at the core they’re stereotypes, they’re played in a way much different from the usual stock set (no tsunderes here, no sir). The characters definitely do push the fourth wall in that sense – consider Tsugumi, who is fully aware her childhood friend status is her best weapon and only advantage.

I never liked Zange’s personality because she always came across as the cliché ‘sexy-naughty’ character, but the other two, Tsugumi and Nagi, quickly felt 3 dimensional, their personalities telling of their respective up-bringings and vulnerabilities; Nagi’s haughtiness and refusal to justify herself befitting of a so-called ‘god,’ while Tsugumi’s limited cooking repertoire (can only fry eggs) is a testament to both her lack of experience and the earnestness of her feelings for Jin. It’s funny how much we can pick-up from such seemingly subtle elements of a character.

Funny story.
I was in an anime store in and around here a couple of days ago (privileged, I know) and the cover for the box set of Kannagi happened to cross my eye. The image itself struck me as strikingly well-composed well-colored and and overall just.. well, beautiful. The scan does it no justice, as the colors seemed considerably more vibrant in person. For what it was – promo art for a harem schoolgirl anime – there was a level of care there that, if I’m being honest, is occasionally missing from big, important franchises like Macross or Gundam at times.
I think the overwhelming level of care Shinbo puts into his anime is a part of the reason people put up with his (often annoying) directorial style. And here, I’ll poison-in-the-well your plans, and direct you the first epsiode of Bakemonogatari as proof of that – in particular, about 1:40 in, but really the whole damn thing’s pretty good 😉
long story short: people who care make good anime, genre is irrelevant.

I read earlier over at ANN that the last episode of Bakemono’ is finally getting released at some point this weekend (today, even?) So, I could well give-in and start watching it soon. The You Tube link in your comment has already expired, but if it was supposed to be a reference to the first episode’s OP, don’t worry, I’ve already seen it and really liked it. Yup, I have absolutely no good reason for not having seen Bakemono’ yet, other than sheer bloody mindedness.

Kannagi is quite a beautiful show. The striking colors mixed with the rain and the sunsets created beautiful scenes, I remember such moments elevated it from being such a cliche. Doesn’t hurt that the character designs aren’t creepy, instead they’re attractive and reasonable. Part of why the Kannagi cast has been such a success with the fans I believe is because of the meticulous attention to detail A-1 pictures put into their mannerism. Especially the title character, her quality of movement really brings her to life. Such quality in the animation is so hard to come by especially with such a show. I do get why you liked the last few episodes, I personally found them jarring and they completely blind-sided me (pet-peeve when a happy go lucky show turns all serious and broody in the last few episodes). Although it wasn’t completely a happy show from the start, the shift to a more serious tone really dampened my overall impression of the show.
Now that you’ve gotten that out of the way CLANNAD!

One step at a time, Ivy 🙂 For me, to go from this to CLANNAD is like going from smoking cannabis to injecting heroin!

CLANNAD after story (not clanned ,the difference is huge) will probably end as one of your favourites,remember that 🙂
-& still no HxH & where the hell is one piece 🙁

I see… Anyway, after reading your comment, I slapped myself into shape and got back into watching Naruto (71 episodes behind) and One Piece (58 episodes behind) again. It’s going to be a long road, but I’m determined to (slowly) catch-up over the summer. I still care about these series, so, don’t worry on that score.