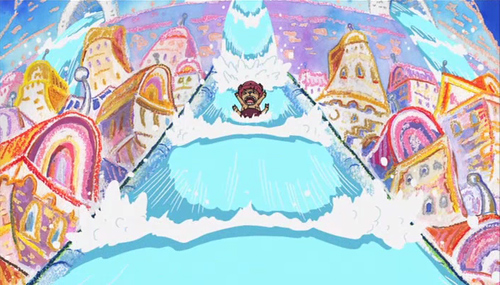 Before I start, a preamble: One Piece is a great anime. Ever since our little agreement a month back I’ve been tackling the series, from 229 onwards at a pace of about 3 or so episodes a day. Unlike the other One Piece addict around here, however, I must admit the plot and characters aren’t the focus of the experience for me. Rather, I was interested in how One Piece transitioned from manga to anime, particularly in light of some of the other Shounen Jump adaptations that came out in the neighboring years. Thankfully, it was a clean transition. One Piece embraces everything Oda tried to communicate in the manga, and amplifies it. Frankly, in One Piece Eiichiro Oda presents us with a dizzying clash of cultures, influences, and nuances from all the world over. One Piece plays out like an child’s toy chest; cowboys next to spacemen next to dinosaurs, and everything in between. Oda takes dissimilar elements – the idea of a detachable shadow from Peter Pan, paired with trope-worthy vampires and zombies – and mashes them together at random. The result is a true children’s anime: completely illogical, highly amusing, and flat-out imaginative. Where the anime begins to shine brighter than the manga, however, is in doing what animation does best: motion, sound and colour.

Try as Eiichiro Oda might, there are only so many ways to express sound on paper. Sound effects in manga, and the visual language which has developed around them are a poor substitute for real sound. Likewise, hatching and other means of leading the eye pale in comparison to real motion. Much as I love art, and lovely as the One Piece manga is, I can’t imagine the above scene (from the Enies Lobby arc) being better in the manga. The intonation of Luffy’s (awesome!!) robot sounds, as well as the quality of the motion help tell the story in a way that the manga just can’t. 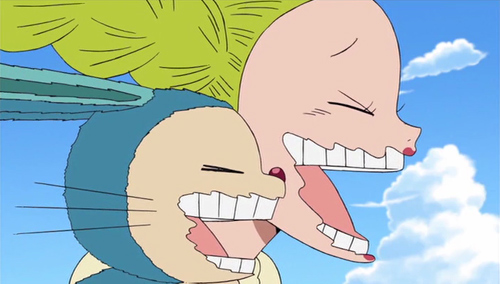 One Piece is undoubtedly the best Jump adaptation I’ve seen: unlike Bleach and even Naruto, both of which seemed to stumble pathetically through their filler episodes, One Piece embraces the opportunity they provide, transporting the viewers at the drop of a hat to the quirky land of Jipangu, where our Straw Hats are mysteriously townsfolk in a Edo-period village, or to the world of Chopper Man, where Chopper is a caped hero, and Usopp a villainous (if easily pushed around) troublemaker! Rather than being an unbearable experience like most filler in shounen anime, these short stints in another universe are entirely entertaining. Moreover, they utilize one of One Piece’s greatest strengths: the sheer madness of One Piece’s real plot allows for transgressions such as these. The fillers are spirited, and done with love. A fan couldn’t ask for more. To call One Piece chaotic would be an understatement. It’s indulgent, and silly, and it doesn’t stop to explain itself. It feels as if Toei’s animators were making up the style as they went – the result is something highly evolved, but never solid, much like Eiichiro Oda’s art. As opposed to merely transcribing the manga, the anime invigorates it, and in doing so, multiplies the sense of joy and wonder present in its source.