Although the vast majority of my recent scribblings concern mostly older series, I am (and have been) keeping up with some newer anime, too.
Densetsu no Yuusha no Densetsu is a name that suggests parody, but this new fantasy series is surprisingly serious, with magic, monsters and adventure. 4 episodes in, it’s difficult to see whether or not it’ll follow through with its potential, but at least the characters are interesting. I picked this up because it’s referred to as Berserk-lite elsewhere and, indeed, it has a very Griffith esque destined-to-go-wrong personality in the smooth-talking, crazy ambitious Sion Astal. I’m holding out for some fascinating character arcs in the future, but it could fast devolve into light-hearted, generic monster-slashing too. Patience is the key, I guess. 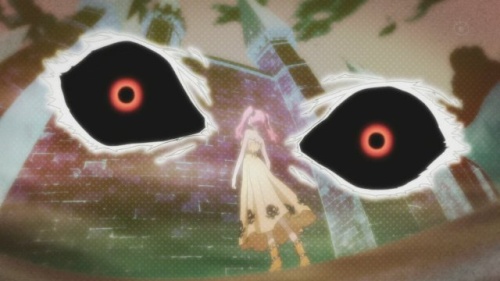 DenYuuDen could still go either way, but I’m more confident in Shiki, and for the record, I’m more in love with noitaminA right now than ever before. House of Five Leaves was a slow-burner that finished very strongly, while The Tatami Galaxy is likely to go down as my favourite new anime of 2010. I’m lamenting not having said much about either series, but take it from me (non-gender specific) guys, if you’re twenty-something (not that age is particularly important,) watch them both and be reassured that the soul of anime is alive still in the hearts of some.
Shiki, then. I’ve seen only the first episode so far(!), but the direction was assured enough, the characters eccentric enough and the art strange enough, to dispel any fears that noitaminA done goofed. I’m looking forward to seeing more.
That just leaves Giant Killing, which may look woefully budget, but has a lot of heart. I love football (of the soccer variety) and it’s nice to finally see it well-represented in anime. 26 episodes will be no-where near enough to provide a properly satisfying conclusion to Tatsumi-sensei’s journey with ETU, but right now I’m just gripped by the tension of each game and crossing my fingers that everything goes well for the team (and it would be really nice if Sera finally scores a goal, too!) 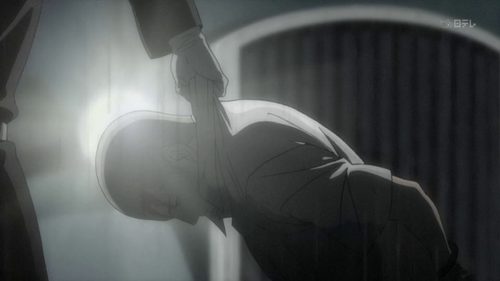 I’m wondering whether I should bother with Highschool of the Dead, or not? It looks like fun, I guess? It just seems really predictable as well. I’m definitely going to check out Occult Academy at some point, and, just last night, I made an impulsive, three episode foray into Madhouse‘s prison drama Rainbow, which was well worth it, but not a show I’d recommend to the faint of heart!
Of course, your opinions on these (and other) current anime are always welcome.

15 replies on “Opinions on current anime”

I’m liking HSOD a lot as B grade entertainment but if you’re not happy with what you’ve seen from first three episodes maybe you can safely drop it. I’m at 6th episode and it’s still pretty much the same, more dead zombies and boobs, and I don’t expect too much to change anytime soon. Occult Academy is more refined and has great humour, although I’m liking HSOD more at this point for its great camp value.

Perhaps I’m underrating HSotD, then? It definitely seems like a guilty pleasure, and I must admit, I was something of a zombie-film fan growing up (the genre’s been totally watered down by this point, though.)

Occult Academy and High School of the Dead are easily my favorites of the season. HSOD is just good crass fun really, but it’s well directed and animated and I’ve enjoyed the way the story’s progressed so far.
I’m not sure how I’d describe OA, but it’s very good. A various mix of interesting supernatural ideas stirred together, with a pinch of interesting characters and a dash of comedy, all brought to a boil by unanswered going-ons in the background. And now I’m hungry for both more episodes and food.
I’ve seen the first two episodes of Shiki, and I don’t think I was quite as taken by it as you were but I enjoyed it enough to want to continue it. I also gave Nurarihyon no Mago a try, which was very by the book and a little too boring at times, but damn can they animate cherry blossoms well. I kind of want to continue this one some time but I’m in no rush.

Would you say that Occult Academy is the best series to appear in Anime no Chikara so far? Anyway, it’s definitely looking like I’m missing something by not watching High School of the Dead.

I dropped Giant Killing after the win against the team that had the Brazilians on it. I know it’s sports, intensity, the will to win, etc., but the whole thing struck me as being too grim. Not enough fun in this version of the beautiful game.
I like Shiki because it doesn’t do things in a routine way. They devote a lot of time to characters they then simply kill off. The secrets are revealed to different characters in different ways. Oh, plus excellent art and direction.
Occult Academy is worth the look. I had some story issues with the latest episode but they did everything else so well! HSOTD I’m gobbling down like popcorn. Yes, it’s blood and gore and fanservice (LOTS of fanservice), yes, it’s routine, yet I find the whole thing so gripping and over-the-top that I don’t care. Apart from the antics in the tub last episode there hasn’t been a weak scene. I just hope they can keep it up.

Glad to find another fan of Shiki… I think we’re few and far between at this point, Peter. Anyway, it’s always a shame to drop an anime series, especially more than half-way into it, but you’d obviously seen enough of Giant Killing by that point to know whether or not it was for you, so in a way, you deserve credit for making it that far! (To be honest, I find it hard to see the series objectively because I’m such a huge football nut!)

Densetsu no Yuusha Berserk-lite? Thats a very interesting way of putting it. The character designs do look a tad bit too cliche though. I’ve been clamoring for a good fantasy show for a while now, surely just you mentioning it let alone watching it could mean that its worth a shot?

DenYuuDen is such a mixed effort so far. It has many elements that make it seem so generic (like, for example, the character designs, which put me off at first too,) but there’s a feeling there that keeps me coming back. The story (like Berserk) is moving at pace right now and the characters are constantly evolving. I don’t know if you’ve seen it, but it’s similar to the sense I got from Toward the Terra at first, in the way that it’s quite pedestrian in execution, but has this fantastic potential for things to twist and turn in the future.

Oh I have I have! Terra was a lovely show, really appreciated it by the end of it all. Ya I know what you mean, I’ll watch the first few episodes. Thanks 🙂

I was thinking of starting to watch a soccer themed anime. Do you think Giant Killing is worth getting into or is there some older, better classic out there which I should watch first?

Can’t speak as to soccer in specific, but anything by Mitsuru Adachi (in terms of sports anime) is worth it. Actually bateszi can probably make a better recommendation in this genre than I can, so I’m just going to… stop.. talking. :p

I really recommend starting with Giant Killing, as it’s ‘serious seinen’ and therefore not as unrealistic/ridculous as some of the other efforts. Good football anime is really hard to come by, but I think GK gets it right by focusing more on the pyschology and tactics of the game, as opposed to being all, “I am this amazing footballer, see me score from the half-way line with this crazy over-head kick!”

Shiki? Really? I watched the first episode and couldn’t help but think of it as a poor man’s Higurashi and, even though I’m a fan of Higurashi, I think that’s saying something.
But TG and HoFL are undoubted love <3

I haven’t seen Higurashi, mainly because I’m not a fan of the aesthetic it’s trying to push (I’ll put that right sooner or later, though) but I actually really like how Shiki looks and that the main girl seemed really eccentric and stuck-up. I like that Shiki has a lot of personality, basically. I hope my faith is justified in the future!

Shiki is based on light novels by Ono Fuyumi, the author of 12 Kingdoms and Ghost Hunt, which were adapted into two among the 15 best anime ever made (12 Kingdoms being #1). While there’s always the chance that the director messes it up, I’m going to watch it expecting nothing less than a masterpiece.
Plus, it’s got a Buck-Tick opening. That tells me at least somebody in the team has got a good taste.