The above image is from Panty and Stocking with Garterbelt, but one would forgive you if you had to double take; the second half of episode 5 feels like it’s from a completely different series. Not only has the art style completely shifted, so, indeed, has the tone. Gone, for the most part, is the rapid-fire banter; the colours are washed out and the main character, believe it or not, is an old man. 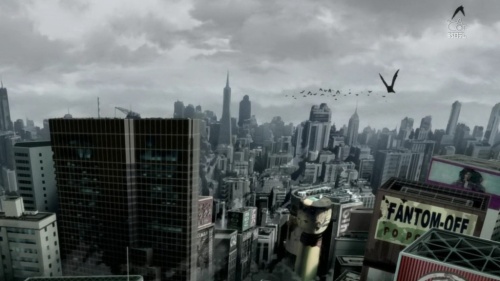 The first comparison that came to mind whilst watching this was Mind Game; the character designs, especially, look like they’ve jumped straight out of that or Kemonozume, but thinking more about it now, there’s very much an echo of Tekkonkinkreet here, too. Not just in the crows or the urban sprawl, but in how it presents Panty and Stocking as the super heroes of a dark city. 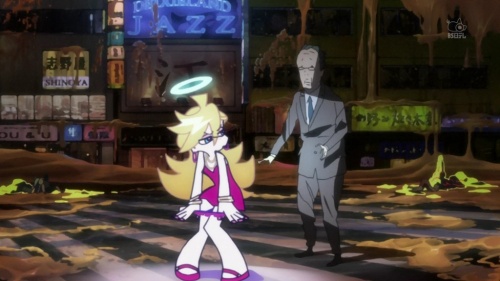 The girls, frequently so vulgar and carefree, save an old man’s day. His world is as harsh as it looks; his family is poor and his work-mates ridicule him, which is why it’s so exciting when Panty and Stocking turn up, jumping over buildings, cursing and shouting, doing their usual thing; not a care in the world and larger than life. They are unreal, and I love that stark contrast of realities (captured beautifully above); come to think of it, it’s so much like this piece of superflat art by Tatsuyuki Tanaka: 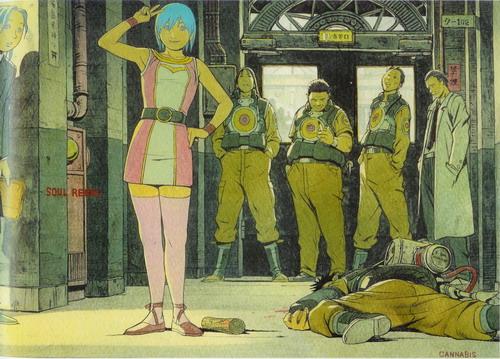 Best of all, though, is just that this is the first episode (well, to be more specific, the first mini-episode) of Panty and Stocking with Garterbelt that’s vested with more than just toilet humour. Don’t get me wrong, I’m really enjoying this series anyway, but I love how warmed I felt by it’s end. The episode’s director was the infamous Osamu Kobayashi (Paradise Kiss, Beck) and Takashi Mukouda was the man in charge of the animation. Those names may not mean anything to you, but they are worth mentioning anyway. 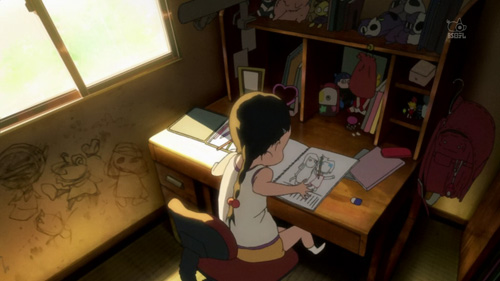 Anime, as ever, is at its best when it’s unpredictable. I never expected such a drastic shift in tone from Panty and Stocking with Garterbelt, but now I can hardly wait to see what’s coming next. I never expected to describe this series as spine-tingling either, but there you go.

So, I’ve changed my mind about autumn 2010; it’s alright after all!

8 replies on “Panty & Stocking with my broken heart”

I’m glad you seem to be enjoying it 🙂 I’ve yet to catch up with anything at the moment, but these caps look scrumptious. The level of depth and contrast look stunning, I don’t remember this show having such attractive art assets. It seemed so vulgar and western I didn’t think they’d change it up to look like this. I know its Gainax and anything they touch warrants a curious glance, but I just couldn’t get over the whole powerpuff girls and rainbow look (no matter how offensive or profane their mouths may be!) it looked strictly unjapanese. But this episode I think might change my mind….I do see a little bit of Beck in there…ya I do.

It definitely gives the series a slightly different angle, but I don’t think it’s going to be like this all the time from now on, it’s just one of those strange curve balls you get every now and then in anime. I was already really enjoying P&S+G, but this totally pushed me over the edge. I guess what I’m trying to say is, don’t get your hopes up, the series is still going to be as vulgar as anything 🙂
(It’s grown on me episode by episode, so if you gave up after the first episode, perhaps you should trying giving it one more chance to hook you in?)

I really commend Gainax as a creative studio. One might dismiss their audacious style or criticize them for being a bit too otaku-centric at times, but they never take a day off or phone it in. They seem to cherish their wildcard role in the industry.

They seem to have found a second wind with Hiroyuki Imaishi, who has taken up the mantle from Hideki Anno and has begun rebuilding Gainax. I would argue that Panty & Stocking with Garterbelt is actually quite anti-otaku, too, in the way it’s drawn and the general air of promiscuity it exudes. Since I’ve got Kuragehime on the mind right now, Panty & Stocking with Garterbelt is very much a series so-called hipsters would be watching 🙂

Panty and Stocking was refreshing and fun at first but after three episodes I found myself losing interest in it. It was the point where respecting what a production was doing and wanting to watch it are two subtly different things. I should’ve spotted that fact, being a long-standing admirer of Gaianx (but not necessarily enjoying everything they’ve done).
Your views here of episode 5 however are echoed by a number of viewers, so I think I’ll at least watch that one. Whether or not I’ll continue I don’t know, but it sounds like the writers are finally doing what I hoped they’d do earlier.

The first half of episode 5 will probably do you in, Martin. It’s about eating boogers 🙂

Although this may well come across as a backhanded compliment, now that I think about it…I find your analysis to be more interesting than the show itself and its self-indulgent experiments in boldness that lead to little more than visceral amusement, on one level, and loads of stylistic fodder for said analysis, on the other.
Gainax has more than enough artistic skill, yes, but such artistry could be used for something a little more worthwhile than an excessively elaborate sandcastle aimed at the Adult Swim crowd.

And what’s not worthwhile about this show? It dares to be stupid, crazy, and FUN…which is a high compliment in the realm of “SERIOUS BUSINESS” anime. The staff seems like they’re having loads of fun working on this show and it shows. It might not be your cup of tea, but it exemplifies what anime needs more of: high-energy cartoons that aren’t afraid of being silly, and more importantly, cartoony.