One of the saddest things about NANA is that its creator Ai Yazawa (who has been fighting against an unspecified illness since 2009) hasn’t been able to finish it. NANA is a story of dreams and ambition, and the characters have struggled too hard and for too long to be left hanging. I hope Yazawa rediscovers her desire to finish it.

To put this post into context, I’ve watched up to episode 37 of the NANA anime, and since it’s a 47 episode series, there’s already a sense within me that it’s nearing the end. I don’t know if it finishes abruptly or naturally, but I do know that NANA kept going as a manga series until Yazawa’s sudden hiatus.

This is my second attempt at watching it. The first was when it began airing in 2006, but I soon lost interest. Having had a hard time sitting through Paradise Kiss, I don’t know if I felt I little jaded with Yazawa’s style of stories, but I stopped watching NANA at an early point, only to return to it recently, a little over 5 years later! 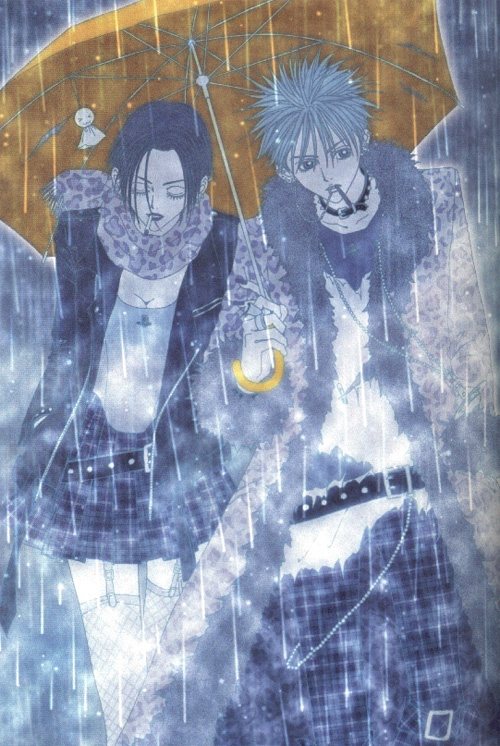 Why now? There is less anime being made now than 5 years ago, but so much of it is still of the otaku-pandering variety. It’s becoming increasingly rare to find series that aren’t about teenagers; that aren’t set in high school; that aren’t an excuse for fan service; therefore, I rediscovered NANA. I needed characters that I could relate to; adults going through the things adults do.

That’s not to say NANA is a mundane, slice of life-esque series. Most of the characters are in rival (punk-ish) rock bands, performing in front of thousands of people. There’s nothing about that side of it that I can related to, in the same way that I can’t relate to any given high school setting, but the difference lays with the character’s feelings; the desire to do something with one’s life, to find happiness, to attain perfection.

You know, Hachi…
That time when you were swept away by love…
Could it be that we felt the same way?
I wonder if you were trying to feel complete too.
If it was like that, I understand your feelings a bit.
That new life that you are trying to protect…
Does it make you feel complete?
–Nana Osaki

A desire for completeness underpins everything that happens in NANA. Characters fall in love, break up, move away and settle down, all in the pursuit of completeness. Is it enough to be in love, or is there more to one’s life? Nana Osaki is in love with her boyfriend Ren, but has ambitions of her own. She wants to sing, but that means being away from him. Nana Komatsu is so desperate for love that she finds herself committed to a relationship that she’s still unsure of. She’s always dreamed of being a happy wife, but now she’s almost there, everything feels less than… complete, and she’s trapped.

Yazawa uses her characters dreams to tear away at their lives. Nothing is perfect, she seems to be suggesting. We spend our lives striving for something, yet the closer you get to it, the further away you push everything else. Is your dream truly worth all that? Such questions are intertwined with NANA‘s spindly aesthetic and melodramatic story. There are times when I roll my eyes at how soapy and cliché it all seems, but I keep coming back for the feelings expressed, often via the narration at the end of each episode, worded in such a poetic way.

It’s snowing outside right now. It’s cold and dark, but the way the snow glows with the street lights is so pretty. I couldn’t think of a better series to watch right now than NANA.

9 replies on “Watching people destroy their happiness in NANA”

I think of it more as a feeling of filling the holes, rather than perfection (or as the translation puts it) completeness.
Both the Nana’s are rather desperate characters, and the opening to the series shouldn’t be read as otherwise, IMO. A sudden relocation on the part of both girls, paired with their binge drinking on the trains there and, a once again impromptu sharing of apartments thereafter are essentially acts of desperation. Both their desires – Hachi’s obsession with love, and Nana’s rise in the world of music – represent the same base desire: to be someone important. Important to whom is the question, however. Nana continually comments on how its “not enough” for her: Ren’s love, top singles, aren’t simply enough to fill whatever void she harbors within her. Oosaki Nana is ravenous for this kind of attention, and so is Hachi. Hachi continually weaves herself in and out of relationships, unable to stop herself, even when she seems to hit a good spot with Nobu. So the question becomes what drives them towards this?
I suppose here in my little comment, I’ll interject with a general observation about Yazawa Ai’s heroines as of late. They’re all tragically flawed in the Shakespearean sense. Oosaki Nana’s flaw is one she readily admits: her own pride. Humility being the ever-revered trait in all cultures, including Japanese, Nana’s pride refuses to allow her to simply ‘settle down’. She can’t lose to Trapnest (not even for one single), nor can she simply calm down and revel in her romance with Ren. She doesn’t want to be just a singer, she wants to be the best one. She isn’t content with a textbook romance from Ren; and has trouble (later in the manga) settling into domestic life with him. She’s happy, but feels it should be something more.
Likewise, Hachi’s fatal flaw (as far as i can tell, anyways) seems to be her indecisiveness. In her career (or lack thereof) as in her love life, she can’t decide what she wants to be. Even when she seems to find stability in one of her part-time jobs (I forget which one), it grates on her. Even though she wanted steady employment, she can’t help but think there’s more out there, and thus, quits. If i recall, what follows is Hachi working a string of very very temporary jobs in Tokyo.
Finally, as a closing to my somewhat disjointed thoughts, snow is the perfect weather to watch Nana in! It’s a bit of a frozen series, told from a very sad future, but very clearly rendered, as if it’s all something frozen in ice.

I never looked at the two Nana’s as desperate (Osaki, especially, seemed to me more aloof than desperate,) but having read your comment, I’m now seeing them in a different light (particularly in regards to drinking on a train, for some reason I just figured it was a Japanese thing like coffee in a can and left it at that!)
As for Hachi’s indecisiveness, that’s definitely a problem with her, but why is she so indecisive? She reminds me a lot of the people that roll out of university with a random degree and hit a brick wall. I can definitely see why she’s so torn by the way things are turning out for her. Her focus has always been on finding a man to love, but now she finally has that man to commit to her, it all seems less than she imagined? So, perhaps it’s not her being indecisive as much as it’s just her being obsessed with her long held, romantic dream of love, and now that dream is reality, she needs something new to dream of? Perhaps, even, she’s so caught up with the idea of a perfect love that nothing she experiences can ever compare?

Hachi’s indecisiveness is rooted in her feelings of incompleteness because she has many options in life but none of them seem fulfilling. The only passion she seemed to have was in getting married/having a “perfect” relationship. Since she based her happiness on this unstable notion, she was never completely happy and she was hence indecisive and swayed back and forth through life in and out of relationships and always putting too much hope in men for completion.

I really like what you wrote about Nana and Hachi’s flaws. Its something that I have been thinking about for a while, but never with such clarity and perception. Geez, I hope that she resumes Nana soon.

I watched the series as it aired way back when (shortly after collecting the Paradise Kiss manga), and I loved it. Especially the small bits of humor thrown into the melancholic proceedings. I missed it so much that I just started collecting the manga and have found it to be twice as enjoyable as the animated adaptation.
Admittedly I came for the art , but I stay for the drama. I hope that the latest (and possibly last) volume doesn’t conclude without resolving some of the major plot points but I’m having fun finding out.

I’m probably going to dive straight into the manga once I’m finished with the anime. I can’t wait to see some of Yazawa’s art, it looks pretty enough animated, so I can only imagine how nice it looks on a page! 🙂

I loved the energy of this work and how principled characters kept transforming. It’s odd that the counterpoint to an alternative lifestyle is a culture of fixed rules. In the film NANA, love and loyalty must fail because no one will take the risk of being content with a little less money, a little less creativity. In fact, every generation learns and teaches the same rule: success demands security, having the freedom of wealth or a wealthy spouse/family. Nothing less will do and under such depotism relationships suffer. The final statement is that we can survive without love, honesty and loyalty. Even the too-sweet Nana or the bittersweet Nana live according to the Eastern/Western culture’s fixed rules. Materialism rules and in reality wears out the artist.

I’ve been re watching the series now that it’s appeared on Netflix and am once again sucked into the story. Thanks for your analysis–it’s true the Nanas, like everyone, have their flaws but what I find striking about this series is its representation of relationship dynamics and how the women are treated. I tried looking for more info on the subject but there are definitely some ideas in the show that seem awkward for a Western viewer: the idea that Nana K. lost Shoji because she wouldn’t fight for him after catching him cheating; Jun telling her that she wasn’t affectionate enough and that her being self sufficient wasn’t compatible with having a relationship (after Shoji told her to do so), Nana O. later on wondering if being on birth control makes her a bad woman and having her OB doctor essentially say “yes”, etc. It’s made me wonder about feminism in Japan in general. If anyone has any links on the topic (in English) I’d love to read them.

I finished NANA 10 hours ago and I can’t stop thinking about how hard is for both NANA to express themselves. All of the characters were weaved by wish of true love. NANA loved Ren but still calls Yasu for so many reason. Reira, even after being so famous she was so lonely. They acknowledge everything, all the pain but we’re helpless given the situation and lack of communication.