Allison & Lillia: Generation 1 had potential.  The show was set in a fictional Germanic country and was based on the light novels of a noted author.  The two main characters, Allison and Will, explore a pastoral world with WW1 era propeller planes.  Their country is in a constant state of conflict with a neighboring country, but the characters never seem seriously at risk.  The setting is so happy and carefree that it’s hard to imagine that this series is based on a novel by Keiichi Sigsawa, the author of Kino’s Journey.  The connection to Kino’s Journey and the possibility that behind the ordinary adventure story lay a deeper plot is what made this show so alluring to me.  At the end of 13 episodes I’m still waiting.
The show’s beginning spares little time for exposition. In episode 1, Allison pulls Will into a hunt for an object that they believe will end the war with their neighboring country.  Allison is excited by the opportunity, Will looks like he doesn’t know what hit him.  What hit him is Allison, a tornado with a headstrong nature that keeps the show fun.  She doesn’t hesitate to steal a plane or cross into forbidden territory when necessary.  She’s a breath of fresh air compared with female main characters of popular shows like Bleach. Allison would never rely on the male lead to save the day. 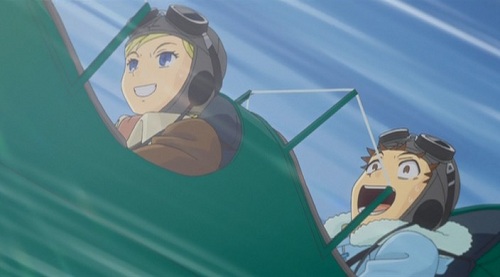 The first 13 episodes contain three separate adventures, each with a mystery that unfolds episode by episode.  The villain in each story is sometimes not obvious, although the show drops enough clues that you can figure things out long before the episode ends.  As the brains of the duo, Will tends to put the clues together at the end of each story.  This can get tedious, it feels like the end of a Scooby Doo episode where the ghost is unmasked.


The simple resolution at the end of each episode is disappointing in comparison to the ambiguity in Keiichi Sigsawa’s earlier work, Kino’s Journey.  That show followed a traveler (Kino) who visits a new land each episode and stays for no more than three days.  Kino doesn’t pass judgment during these visits, preferring only to observe.  The show presented sad situations, like a town choosing to die in a natural disaster, and did not dull the effect by resolving the problems it showed.  The moral relativism at the heart of each episode of Kino’s Journey is what made it special.  I came into Allison and Lillia hoping for a show that was as deep and unique as Keiichi Sigsawa’s prior work.

Where Kino’s Journey showcased moral relativism, Allison & Lillia sticks to traditional notions of good verses evil.  The three vignettes told by the first 13 episodes each have a good guy and a bad guy.  Good guys win, bad guys lose.  The show tried to keep the stories interesting by structuring them as detective thrillers and in that sense it succeeded. I got wrapped up in the show and would go through several episodes each sitting.  I enjoyed the show while I was watching it but in the end I felt wistful for the complexity of Sigsawa’s previous work.

My lackluster opinion of the first half of the show leaves me hesitant about watching part two.  I am certainly happy that the author has found happier subjects to write about, since just watching Kino’s Journey left me feeling melancholy sometimes.  In the end, just as Allison wouldn’t relish an adventure where she knew the outcome in advance, it’s hard for me to get excited about a show this predictable.

I have to admit the way the first half of “Allison and Lillia” ended completely put me off watching the second half.
What Will did towards the end of the first half was just SO INCREDIBLY STUPID I didn’t want to watch any more.

It took me a while to think of which incredibly stupid thing Will did, but then it hit me. I chalked it up at first to some peculiar Japanese value, but the more I think about it the more I realize that Will himself, rather than the Japanese people, should own up.

Unfortunately it gets worse. It’s no longer predictable… just really, really stupid. Like, bad-guys keeping up with a train by walking next to it, stupid. Like, characters cheating death thanks to the silliest of coincidences, stupid. I don’t want to say “avoid” because I’m not a big fan of dropping anime… just set your expectations really, really low.

I was actually on the fence about getting part two, but thanks to the comments I’ve put that thought out of my mind. Their are much better series to buy for me to waste time with this. I do understand your aversion to dropping anime, I’m pretty OCD about completing series, but for this one I’m willing to make an exception.

Yeah, I never bothered watching this when it first appeared because it just looked so dull, and judging by your review here, that’s a feeling that permeates the series as a whole. Weird, I loved Kino’s Journey too… Maybe this was him trying to be more appealing to kids?

I suspect that kids were the main audience. If you liked Kino’s Journey make sure to check out the OVAs, you may have missed them if you just watched the main series.

I dropped this series at about this point. And judging from the opinions of bloggers who stuck with it (Martin and especially Hanners come to mind), I made the right decision. In fact, I got the impression that many kept watching it because they were in the mood to watch a train wreck in action. As for what I DID watch … oh, god, that fake bullet scene at the church … Why? WHY?
Such a waste of two appealing main characters …

What a waste of an otherwise serious show as well. He might as well have had a white flag come out of the gun, looney tunes style.

“The connection to Kino’s Journey and the possibility that behind the ordinary adventure story lay a deeper plot is what made this show so alluring to me. At the end of 13 episodes I’m still waiting.”
Imagine how mortified you’d feel after the full episode run… (-_-)
Wisecracks aside, I’m still at as loss as to how this could’ve been such a disappointment. As you say, it’s really unexpected given who wrote the original novels. It’s almost as though this was the product of a completely different writer because the moral ambivalence and poignant philosophy that comes through in the Kino stories was completely absent.
I suppose that what this intended to be was an old-fashioned kids’ adventure story inatead of a philosophical experiment like Kino was, but even so…kids’ stories can still be complex, challenging and intelligent so there’s really no excuse.
What did impress me, and what kept me watching through every cringe-inducing episode, was the combination of the characters and the world-building. The background, the cool planes and vehicles…then there was a cast of characters who had the potential to generate really fun on-screen chemistry. Even the list of VAs voicing them is impressive but they were given such a godawful script it was a waste of talent.