For me, a personal anime golden age is any consecutive run of 3 years in which the highest number of your favourites are gathered. 3 years may seem arbitrary, but I’ve chosen this specific range because, at least from my experience, the vast majority of anime fans tend to live and die in that time, leaving behind their lists and blogs as if time suddenly stood still, their scribblings, once filled with such joy and passion, now mere archives for the future generations of warbling young otaku to laugh at and build on, and so it continues. Anyway… before this all becomes a bit too existential, let’s crack on, shall we? Hi, I’m your local anime ghost, also known as bateszi, and here’s my personal anime golden age.

END_OF_DOCUMENT_TOKEN_TO_BE_REPLACED

Allison & Lillia: Generation 1 had potential.  The show was set in a fictional Germanic country and was based on the light novels of a noted author.  The two main characters, Allison and Will, explore a pastoral world with WW1 era propeller planes.  Their country is in a constant state of conflict with a neighboring country, but the characters never seem seriously at risk.  The setting is so happy and carefree that it’s hard to imagine that this series is based on a novel by Keiichi Sigsawa, the author of Kino’s Journey.  The connection to Kino’s Journey and the possibility that behind the ordinary adventure story lay a deeper plot is what made this show so alluring to me.  At the end of 13 episodes I’m still waiting.

END_OF_DOCUMENT_TOKEN_TO_BE_REPLACED 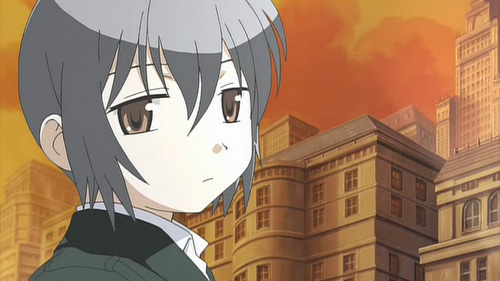 I quite like subversive fairy-tales; the suggestion that there is something ugly and unknown shifting beneath a veneer of superficial beauty. This is precisely why I so admired Princess Tutu, because lurking behind that familiar style of magical girl characterization was insecurity and doubt; supposed heroes and villains stalked by emotions betraying their cliche destinies. Kino’s Journey is much the same in the sense that its own depiction of beauty is often offset by a harsh reality. Supposing that one extreme of feeling cannot be defined without the polar opposite, Kino simply muses that “the world is not beautiful, therefore it is”.

3D-Fansubs recently released 2007’s “Kino no Tabi Movie 2”, also known as “Kino’s Journey -The Beautiful World- The Land of Sickness -For You-“. I still remember how I felt when I first discovered Kino’s Journey. Shocked? I had no idea of what to expect, I’d never even heard of it before, I simply got hold of the DVD and pressed play. Since then, I’ve always loved the show, it’s the quintessential unknown, underrated gem; serious, subversive and philosophical. The original TV series (13 episodes) appeared during 2003, but apparently, no-one noticed it. This is your chance to make that right. 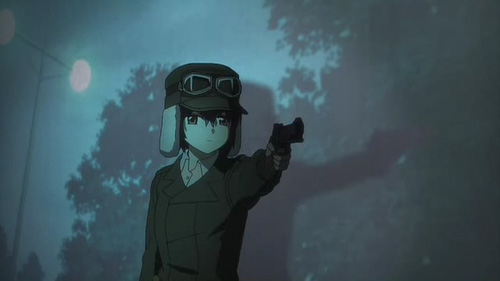 First off, the new movie is animated by SHAFT; everyone loves them, right? After all, they’ve produced recent favorites like Hidamari Sketch, Sayonara Zetsubo Sensei and even Ef: A Tale of Memories. As expected, they’ve actually done a pretty fine job, most notably, the previously androgynous Kino is starting to look and sound inexplicably female; now she’s suddenly paternal and caring, but still distant enough to avoid breaking her 3 day rule. 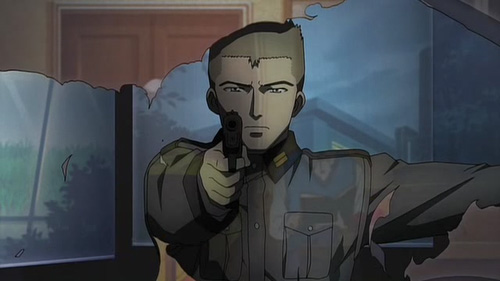 You see, the twist of Kino’s Journey is that she’s a globe-trotting traveler who spends no more than three days in any one country, and her only companion is Hermes, her talking motorcycle. Kino may look like a frail young lady, but her seemingly weak appearance belies a great talent for pistol shooting and a rather ambiguous morality; basically, she’s capable of, and does commit, murder at the drop of a hat, but only tends to act when forced into a corner. Through out her various adventures, she travels from country to country, tasting various cultures and technologies, looking at everything from an objective point of view, much like a scientist observing an elaborate social test. She refuses to pass judgment on anyone, or feel either elation or horror, despite almost constantly facing strange circumstances. 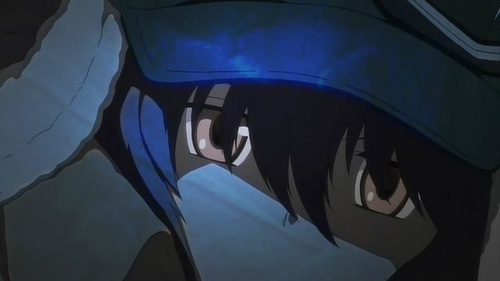 As you may have guessed, Kino’s Journey was an episodic TV anime, and this second movie is no different. It’s completely self-contained and runs a measly 26 minutes, essentially, it’s just another installment to add to an already impressive inventory of bizarre adventures, with the ever-chirpy Hermes in-tow. You can easily watch it without having seen the original TV series. It’s worth noting that the vast majority of the show is directed by a certain Ryutaro Nakamura, who’s most famous previous work is the similarly discordant and thoughtful Serial Experiments Lain (and as of writing, he’s also directing one of my current favorites and arguably the best series of the fall 2007 season, Ghost Hound). 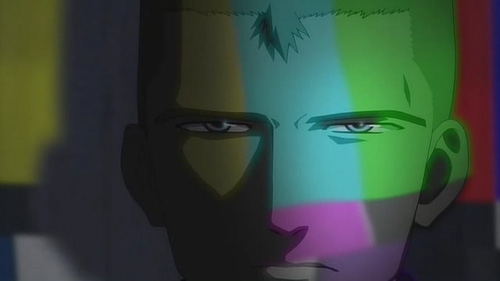 The basic plot of the “movie” goes something like this. We begin, as ever, with Kino and Hermes entering a new country; this time, it’s the worryingly named “Country of Illness”; a technologically advanced settlement purposely separated from the outside world due to the various illnesses and diseases affecting its peoples. To what depths is the country willing to sink to in order to find a cure? Are a few healthy lives worth sacrificing if it could mean salvation for hundreds more? Hell, what gives mankind the right to give or take life, even if it’s in the name of scientific advancement?

Kino herself refuses to ask these questions and considering her quiet apathy, we have no moral compass to blindly follow. There is no emotional music with its virtual “cry here” pointers seen in so much anime; you are expected to think, and feel, for yourself. 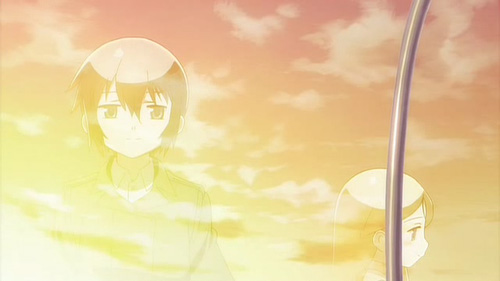 It’s interesting how the sickness is largely represented by a helpless, cute young girl, the likes of which we’re used to seeing in moe anime like Kanon and sola. We’re being pushed to feel pity for her, yet her precious existence is only possible with the sacrifice of countless others. Our endearment to her innocence and beauty, much like the superflat movement, is intentionally subverted by the corpses propping up her health. Again, Kino reminds us that the world is not beautiful, therefore it is.