Japan’s train system fascinates many, but I’m not as taken by the vehicles themselves as by the sheer amount of people shoved into each carriage, to the point where one can hardly breathe. Aside from finding it weird that people would willingly submit themselves to such claustrophobic conditions, it’s also a fertile breeding ground for molestation.
This episode of Mawaru Penguindrum jokes about a school girl being groped in the carriage above (by a penguin, no less!), but I’m reminded of the film I Just Didn’t Do It, in which a young salary-man is wrongfully accused of doing the same thing, is arrested and has the law completely stacked against him: his life is basically ruined. 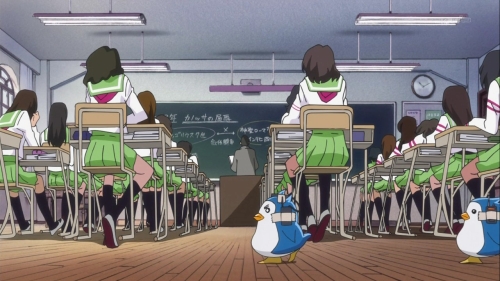 In schools in the UK (at least in my experience,) we sit at tables rather than individual desks with sometimes as many as four or five students per table, but obviously, in Japan, students are sat at their desks, with a palpable amount of distance between each other. There’s a philosophy to be considered for these seating choices, but every time I see images like the above, I can’t help but feel how lonely it all looks, as if Japan is training its children to be introverted. The symmetrical way the desks are placed is also interesting, so very neat and organised, as if to encourage conformity. 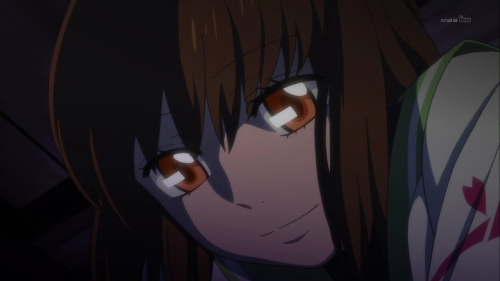 So, if there was any remaining doubt as to Kunihiko Ikuhara’s intent with Mawaru Penguindrum, we meet Ringo, a girl with a crush on her teacher. Well, I say crush, but it’s really more of a scary obsession: in the scene above, she’s laying beneath her teacher’s house, listening to him relax after work: her eyes are crazy.
Comparisons to Utena abound, but what’s notably affecting about Mawaru Penguindrum is that it’s basically set in the real world. Utena always had that element of a twisted fairy tale to it, but this is a story more grounded in the Japan of today, and is that much stranger for it.

we sit at tables rather than individual desks
In the US it depends. I would say we mainly sit as desks like they do in Japan but sometimes the desks might be pushed together, especially if there is group work.
As for the crowded trains, I imagine the difference is between peak hours and non-peak hours. If it is the time people are going/leaving work & school the trains will be more crowded than other times. When I was in Tokyo the trains weren’t really all that crowded and the system was wonderfully efficient and easy to use. On another note I definitely am enjoying the train motifs in the series.
As for the setting I agree, Mawaru feels like a story that takes place in our world but there are all these things that exist beyond our imagination so to speak.

I’m looking forward to one day sampling the Tokyo subway system. London’s trains can get quite packed, too, but I think they probably draw a line at literally pushing people in the doors, which I’ve seen happen in Japan on YouTube, but you’re right, it’s no doubt just a rush-hour type thing.

Thank you for writing a digestible post on this show. The first episode triggered a deluge of analysis which was alarming even for someone who enjoys such things.
Your parting shot about being stranger for being set in the ‘real world’ makes a lot of sense, only that it’s too soon. I am still profoundly affected by the surfboarding elephants and Nanami’s special episodes to feel the two episodes from Penguindrum as stranger.
In the Philippines, we too have small chairs like you see in the show. I’d took it for granted that the rest of the world had similar classrooms. I think desks would be cool though, as it encourages interaction and cooperation.
The trains here in the Philippines are even packed worse during rush hour. It’s gotten so bad that the carriages are segregated by gender. Women and children are herded toward the front carriages, so if you’re a train-goer you’re going to be a sardine in a can of dudes.

I found Digiboy’s travel diary quite fascinating in how it captured the differences between the Philippines and countries like the US (and the UK, where I am.) I knew pretty much nothing about your country until I started anime blogging, but now I feel compelled to visit some day! 🙂
But yeah, the analysis of this series has been rather heavy when you consider what we’ve actually seen so far. I guess we can attribute that to Utena‘s reputation, which definitely prepares one for Ikuhara’s style (compared to something like Mushishi, which got little to no coverage in the blogosphere at first, probably because no-one was prepared for it.) We’ll probably see things cool off over the next few weeks, I’m still riding on a wave with this series myself.

All through school in the US (in the 70s) we sat at desks, or chairs with those folding tops. I spent six months at a British public school and sat at a desk there, too. The thought of using tables back then would have been thought of as futuristic, part of some new and controversial teaching method, like the New Math. Oh wait, I seem to remember tables in French class. Forget I said anything.
What gets me about that classroom pic above isn’t the desks, it’s the black socks! Must be a very strict school.

I think school’s in Japan are quite strict in general, at least that’s the feeling I get looking at them through a window of pop culture (which, admittedly, is probably massively skewing my perspective.) Since you’ve been teaching there, what’s the classroom vibe of China? 🙂

I don’t work for a public school, but a language training school, so I can’t tell you what the average kid’s classroom is like. At our school it’s all chairs with folding tops, usually arranged along the walls and at the back so that there’s room for activities in the middle. Though my school has a strict curriculum, the emphasis is more on making the learning fun, rather than the boring memorization they get at the public school in order to pass proficiency exams (so I’m told).

It could be that the way students are isolated because of seating arrangements is to promote individuality and independence. The person next to them, in front, in the back, or even diagonally isn’t within reach and so they have to rely on themselves to solve their own problems.

Yup, that’s definitely the up-side to sitting at desks and, if Japan’s pop-culture is anything to go by, it certainly works for some. I’m often just struck by how disinterested and quiet Japanese classrooms are (I’m basing this opinion on what I’ve seen in Japanese film and anime, though, which is never a good idea.)

When I read the part of your post about Ringo all I could think of is the seemingly large number of teacher/student sex scandals in the US. It may be that such incidents are over reported (at least compared to their frequency). But I can’t help but think that they are not uncommon here. I wonder how that compares to Japan.

When I’ve had the misfortune of visiting it, Sankaku Complex is often full of Japanese sensationalist teacher/student stories.
The plot line with Ringo reminded me of a particularly harrowing part in Bokurano, in which the teacher and student actually have sex. Suffice to say, things don’t end well.