It’s been fun re-watching Code Geass.
At the time of its airing, I was never at ease with its rather passionate fan-base and, as if to distance myself from them, ended up treating it quite harshly, but with the benefit of hindsight, it deserves better. Divorced from its specific era, Code Geass is a fascinating series, bubbling as it is with nationalistic factions and foreign conquerors.
This exchange during episode 12 particularly caught my eye: 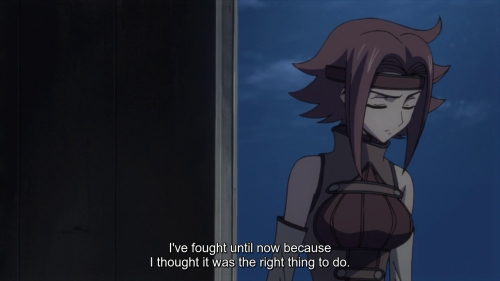 To set the scene, Kallen and Lelouch are discussing their futures in the Black Knights after realising that they were largely responsible for the death of the father of a close friend (Shirley, who also happens to be in love with Lelouch!)
A guilt-stricken Kallen is ready to give up: 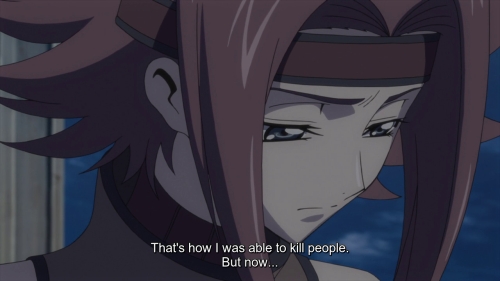 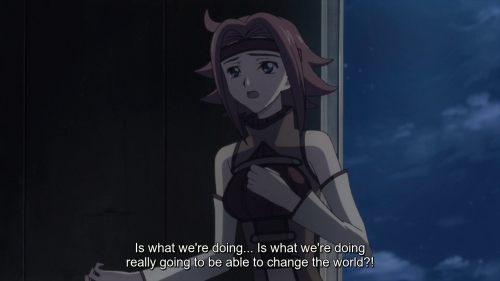 The subtext here is that up until now, Kallen had been just playing at being a Black Knight, at being a terrorist. She’s lead two (almost) completely separate lives, but suddenly, is now being forced to witness the consequences of her actions. Lelouch is similarly affected, but also more determined to see things through. 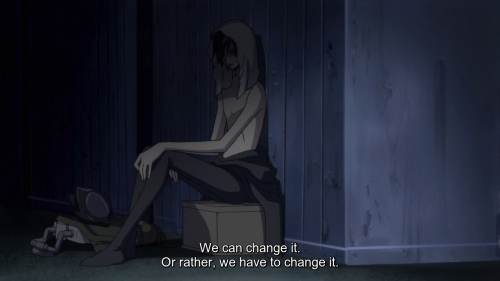 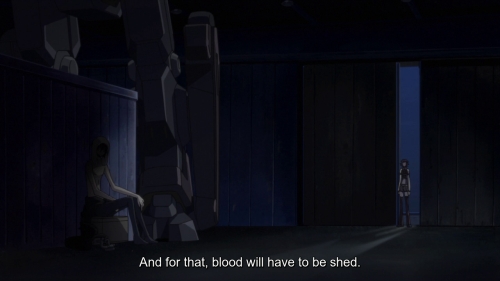 What Leouch espouses here is a line of reasoning often used by terrorists to justify their means; that to change the world, one must be prepared to get one’s hands dirty. In other words, the murder of innocents is ideologically justified by his crusade for a better world.
As if to ram the point home: 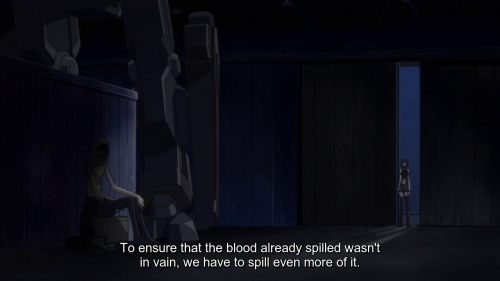 This is as much as a warning to Kallen as a statement of intent: the Black Knights will not stop here, rather, they have merely started, so if she’s getting cold feet, best leave now. Her response, below: 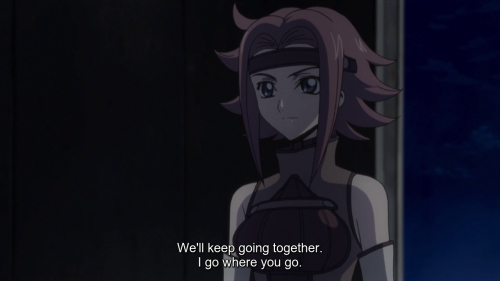 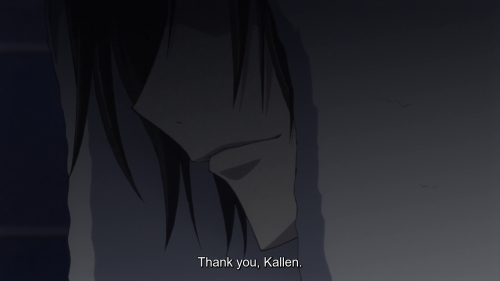 I suppose what I find interesting about all this is that it strips away the delirium of Lelouch’s exciting quest for vengeance and gives us a vulnerable moment between two conflicted people; two people who also happen to be terrorists, contemplating the human cost of their actions. We cheer for Lelouch in Code Geass because he’s our main character, but if this were real, how would we judge him and the Black Knights? What if the Holy Britannian Empire was the United States? How would we see Lelouch’s rebellion then?
Alas, the fun thing about Code Geass is that it’s set in a fictional world and we’re able to reflect on the struggle of Region 11 through eyes not tethered to the real world. This is a story told from the perspective of terrorists, and, free of spin and bias, my empathy is real.

15 replies on “Reflections on terrorism in Code Geass”

I feel similarly about the fandom. At the time, there was almost a fervor around the show. I remember going home after university to watch an episode of R2, and then coming back in the morning. I had other friends at school watching the show, and when we’d pass each other in the halls – both knowing the trainwreck of an episode we’d just seen (such is R2, after all) – we’d catch each other’s eyes and just burst out laughing at our hidden secret. As much as it was the episode itself, it was watching the internet explode with each cliffhanger and twist. It was exciting, but being the prickly elitist I am, I was forced to brush Geass aside for ‘higher’ pursuits. It was just a fascinating trainwreck, after all. I find it kind of fascinating to revisit anime like this, which were so intensely popular in their heyday, but are imminently tied to a mindset of that heyday. Code Geass hasn’t endured quite as well as some would hope, but it’s a fascinating series.
I agree that it’s interesting to watch it when divorced from that (frankly) fervorous post 9/11 mindset: Though it aired years after the attacks, the war in Iraq was at its peak, and the US was at its most xenophobic. I remember watching Code Geass and thinking how dangerous a show it was – dealing, so openly with things like terrorism and rebellion. Then, as now – one man’s insurgent is another man’s freedom fighter. It covers a wonderfully blurred area of political thought.
Interestingly, with the situation in much of the Middle East and Egypt as it is now, Code Geass may be more relevant than ever.

Yeah, in a way, I think a lot of people probably just enjoyed the fabulousness of Code Geass when it first aired, without really thinking much about what was going on underneath the CLAMP madness. It’s only really in hindsight that I’ve been able to see just how visceral a piece of social commentary it is, and maybe that’s only something we (well, people like me, at least) can only realise after a certain passage of time. After writing this post, I was trying to think of any other series since Geass to be this political, and only Gundam 00 came to mind (FMA, perhaps, with the Ishbal storyline,) which just highlights how fascinating a production it remains. Rarely is anime so… topical.

I was ever so fascinated by this series, and yes, it is a reflection of Terrorist actions and the morality they battle with daily against the Oppression that holds them captive.
It is true that if something like this were to occur in reality, it might not be so favorable… But then again One Man’s Revolution, Is another Man’s Angst against Terrorism.
Or in the other sense; The Oppressed call it a Revolution, The Rulers call it a Rebellion, but in either case there will always be injustice, and blood will always be shed; no matter who is right and who is wrong.
I love Code Geass because it sheds light into a reality most of us never have had to experience, and gives perspective on the fine line between what is Moral and Just, and what is immoral and Unjust.
Although they seem to leave it up to the viewer to make their own conclusions, the argument for or against seems to come down to, Are you willing to live under Tyrranical Rule without rights only privileges, or are you willing to stand up and fight for your Rights and be willing to live with the consequences of your actions whether you win or lose.
Great post!

Thank you for the comment. I completely agree with you, so yeah 🙂

I’m embarrassed to admit that I haven’t seen this, I’m not sure what I was watching instead. As for rooting for terrorists in real life, it was pretty popular even in the US pre-9/11. After all, what was the Rebellion in Star Wars if not a group of terrorists seeking to overthrown the government?

The Star Wars point is a good one, and it’d totally slipped my mind, although interestingly, the prequels are more about an establishment being toppled by Evil, which is definitely more relevant to our times.

i really don’t get it why does Leluoch rebels against his father. he still fights and doesn’t care if he would hurt somebody or not. do you think he really cares about Nunnally?

This is a point I was contemplating just last night when watching R2, in which Lelouch is directly confronted with a path diverging from Nunnally. He always used her as his excuse for fighting, but with the way things go in R2, that’s quickly taken away from him and, for a short while, he’s left with nothing. Truly, I think Lelouch cares about Nunnally, but I also doubt she was the real reason for his rebellion. I don’t know what that real reason was, but quite frankly, I think he just used her as a convenient excuse.

On CG in real life: You have to factor in Sunrise’s over-villainization of the… villains. It’s hard not to support Lelouch when the bad guys are so bad!
Of course, there’s always Suzaku. But nobody likes Suzaku so it doesn’t really make a difference.
On CG in general: I really liked Code Geass. Cliffhanger after cliffhanger, never failing to surprise. My favorite scene is probably Euphemia’s death – it gave a sense of [contrived] realism to Lelouch’s rebellion.
P.S.: relflection

(I literally face-palmed when I saw that typo in the post’s title. I… don’t know how I managed to not see that for so long, but thanks for pointing it out!)
Yeah, well, I guess what’s interesting about Geass is that, regardless of who’s painted as the villain (and I don’t think it’s as clear-cut as you say by the end, given some of the things we see the Black Knights do,) the main character is still an anti-establishment terrorist willing to kill civilians if it means winning. One interesting point to consider is that would the lives of the people in Area 11 significantly improve outside of Britannia’s control? Would Lelouch’s Japan be any better?

This post was very fascinating. I rewatched Code Geass last year, and the show impressed me even more after the 1st viewing. The audacity by which the writers approached such a controversial topic continues to blow my mind. And the ending… no one could have seen that coming. Code Geass honestly I believe will remain a very relevant show, and its focus is so unique that it can be shown to anyone that might not appreciate anime and grasp their attention. Planet ES was another show that address terrorism in a unique way. Planet ES gets a better score, because i personally believe that show was perfect. I literally would not change a thing.

Yeah, I think when you look at Planetes and compare it to Code Geass and even Infinite Ryvius, it becomes clear that Goro Taniguchi has a lot to say about government and human nature. He’s a fascinating director! 🙂

There’s definitely a Japanese flavour to Geass’s terrorism, Iknight noted back when the series was airing that the gas scare in the first episode was clearly a nod to Aum Shirinkyo’s sarin gas atrocities in Tokyo subways during the 90s.
As for the political aspect of Geass, I felt the show in general has a fairly solid handle throughout the first season, but I felt the second season sort of just spent most of it’s time destroying the careful foundations laid in the first season; we have limited scale, generally well-thought through engagements replaced by super-mecha spewing lasers that are clearly designed to sell model kits. Not that I begrudge Sunrise (and ultimately, Bandai) the decision, but R2 felt more spectacle than truly introspective in the way the first season was.

To be fair, I would say there were at least a few interesting retrospective moments throughout R2, just not nearly enough to properly cover all of the continously accumulated material as the show rushed towards a conclusion and the time allocated to such conversations was clearly cut down. It’s still possible to discuss them , outside of the whole “trainwreck” mindset, but I will admit this isn’t necessarily an easy thing to do.
As for the mecha, it was also a shame that they got a little too powerful, but I also feel there’s a bit of hyperbole in most descriptions of the issue. Case in point: even towards the end, many of the major battles weren’t necessarily resolved in favor of whoever had the most powerful robot. There was at least an attempt to make ultimate victory or defeat depend on other factors, even after seeing shiny beams blow plenty of faceless grunts up.
On a happier note, I am rather hopeful about Kazuki Akane’s upcoming Code Geass Gaiden, which apparently won’t be released until 2012 but appears to still be in the works, and largely set in the time between both seasons.

I like when stories are shown from the perspective of wrongdoers. Death Note was like that as well thus they both appealed to my darker side. Muahahaha