Series like Blood-C catch my eye. At some point during its airing, I got the impression it was bad: the weekly reviews at Sea Slugs and Moe Sucks say as much and more, but since finishing, I’ve also read takes at chaostangent and S01E01 that say the opposite. Having now seen it for myself over the last week, I agree more with the latter blogs. Like all series that seem to require a little patience, Blood-C has ended up being quite underrated.
It’s easy for me to say this now, but it just isn’t the type of anime designed to be dissected week-on-week. Mirroring Saya’s fragmented state of mind, it’s an intentionally frustrating story up until the very end; a movie plot stretched out over 12 episodes.
I don’t think I could’ve lasted 12 weeks with it, but 5 hours? So much more appetizing! I don’t blame its critics for treating it like a TV series (after all, that’s exactly what it is!) but from now on, others will see it more as a jig-saw puzzle, each further instalment just another piece to add to a bigger picture, minus the weekly breaks in-between.
That ability to binge makes a huge difference to a series like this. My experience was completely different to that of the weekly follower, explaining why there’s such an inconsistency of opinion on the show. There’s no wrong way to view Blood-C, but I honestly feel that the reviews of it on an episodic basis are now, well, irrelevant. 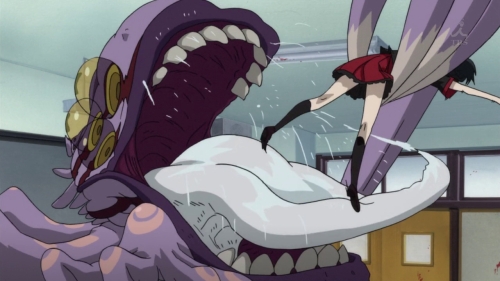 Another thing is that the censorship of the gore in the show is extremely distracting. Had I seen this uncensored, it could’ve quite easily been the goriest anime of the last 10 years, right up along-side the likes of Shiki, Shigurui and Elfen Lied. It’s worth the time alone just to see a series so brazenly bloody, alas, it’s hardly worth watching just now because it’s so damn censored.
It’s a shame because Blood-C is totally my kind of thing: pulpy horror. A disorientated Saya fights monsters, each fight more bloody than the last, full of collateral damage, escalating an ever growing sense of incongruity. No-one is safe from the massacre as it increasingly feels like one long descent into chaos, a feeling only confirmed as the veil is lifted from Saya’s eyes in the last episode and the red-mist well and truly unfurls. 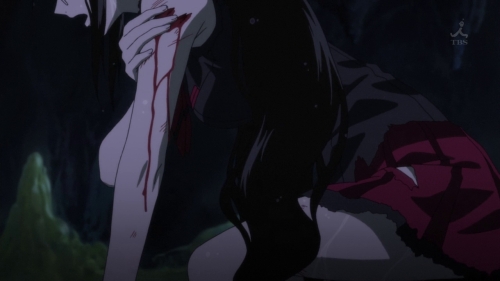 She’s still a cool character; calm, strong and brave, but I wish we’d seen more of her darker side. She spends too much time as the sedate, responsible girl. I’m sold on the forthcoming movie just to see her in full ‘dark mode’ and that’s really Blood-C‘s greatest short-coming, that she’s is too much of a blank slate, not inquisitive enough by half. It could be argued that the selfish, immoral bastards around her are constantly re-enforcing her lack of control, but really, Blood-C‘s too long not for her to ask at least a few more questions.
This is the first series post-Madoka to take-on that sense of something being wrong in an otherwise normal girl’s life (and there’s a fairly blatant homage to a famous scene in Madoka, too) but missing is the directorial flash of someone like Shinbo. Blood-C is interesting, violent and pulpy, but just a bit empty, too.

13 replies on “Blood-C: one long descent into chaos”

After watching the whole thing did the repetitiveness of the first three episodes make more sense?

Yup, there’s a big twist towards the end that basically explains why everything in the village feels a little off, but I don’t want to spoil it. Suffice to say, things go seriously wrong!

The end certainly changed my view on this show being worthwhile, but I wish they had gotten to the good stuff sooner. The story seems better suited to a movie then to a season long TV show. I wonder how it did ratings wise in Japan while it was being broadcast.

Yup, I get the feeling it was written to be a movie but later was stretched out to TV length. Regardless, Blood-C is just better when viewed in that way. Minus the censorship, we’ll have a whole other beast on our hands.

Wow I’ve decided to stay as far away from this as possible after the negative backlash the series got the first few episodes. But now…….color me intrigued! I never expected it to be so so violent and unrelenting. Just a little something that has been worrying me is how Production IG have translated Clamp’s character designs again. Are they lanky, dry and static like xxholic? Or are they more vivacious and dynamic (Tokyo revelations)?

The “Clampness” of Blood-C is somewhere in-between the two extremes; perhaps a better comparison is to Code Geass? The character designs are pretty much all thin and lanky, but not so extreme as to be distracting? They lend quite well to the pulpy atmosphere of the series, give it a kind of farcical aesthetic! 🙂

I can’t deny the criticisms others have already stated (boring cast, repetition, huge plots holes in the story and questionable logic for many character’s decisions); however, like you’ve mentioned, this show shouldn’t be treated alongside the likes of Penguindrum, but rather as a high energy ride. Leave your critical analysis at the door, suspend your belief, and you’ll probably come out positively from the experience. Maybe it’s because I was so dejected from the first 3 – 4 episodes that I threw all expectations aside and enjoyed the show for what it was.
In regards to the censoring, for the most part I’d agree with you. Saying that, not being a massive fan of extreme gore, there are some scenes I’m probably happier I never got to see explicitly (eg. the second twin’s leg-split death in ep 12).
I definitely agree that this was the first post-Madoka series to copy the idea of creating a warm, stable environment for the main character, before slowly lifting the curtain on everything they thought sacred. The Mami reference is an easy visual nod, but the tone definitely also tried to emulate the show. Not as successfully of course (what with constantly re-establishing Maya’s mind control, and thus changing the mood over and over), but it was an interesting effort.
Anyway, here’s to looking forward to the film! Just no singing this time, please!

For some people, I suppose critical analysis is part of the fun. It’s easy to lose sight of that sense of fun though, when reading diatribe after diatribe on a series. Blood-C is a solid “B movie” effort and I don’t think enough of the reviews capture that charm. It’s like trying to review Evil Dead 2 in-comparison to Citizen Kane. I’ve seen both, and I wouldn’t complain about the lack of characterisation in Evil Dead 2! It’s that sense of perspective I find lacking in certain reviews.
As for that leg ripping scene, yeah, I thought it was pretty damn gross too, but I wonder if the censorship made things seem worse? The ambiguity of it causes forces us to imagine what we’re seeing and that’s infinitely more disturbing! 🙂

To be fair, the tenet of “something wrong in an otherwise normal girl’s life” is something carried throughout all of Blood‘s different incarnations. I get the impression that Blood series (Blood+, Blood: The Last Vampire) falls into a very similar category of series as The Girl who Leapt Through Time. One core premise/source story, told in many different ways through many different characters. But this is just idle musing 🙂 Blood+ is by far my favorite incarnation of the Blood series, as it gives itself quite a bit of time to flesh itself out. It also has the blessing of having not one but all four opening animations be absolutely gorgeous. As an aside, the key animator of the 2nd opening (my personal favorite) has gone on to work as the main animator for Guilty Crown this season. More reason for me to check that out, I guess 🙂
Anyways. It’s interesting to see the CLAMP aesthetic treated in this way (ie, really animated brutaility) since it usually seems to go the other way (I’ve made my rant about how I think CLAMP character designs influence creators to make very high-drama anime before, though, so I won’t go into it here.)

I’d forgotten until now, but there’s actually a pretty big-budget live-action Blood film, too! It’s weird how Blood (or rather, Saya) has become this ubiquitous franchise, all stemming from that random OVA. I wonder how much of it is driven by interest overseas?
And yup, Kazuto Nakazawa is basically a genius animator. I said as much in 2008 😀

Argh, I’m one of those who watched the first few episodes, got tired of Saya singing on the way to school, and dropped the damn thing. On the other hand, I’m not a big fan of gorefests, anyway.

Thanks for the shout-out. The more I think about the series (and I’ve thought about it more and more since writing my review), the more I believe there’s something really meaty to be taken away from its story and the way the show is executed, even if it’s not what I’d call perfectly-constructed by any means. I will probably have some follow-up (and more spoiler-filled) words on it at a future point.
I’m definitely looking forward to the movie now, though!

To be honest, I didn’t realized the series befor the dvd release was announced in germany.
After watching a view episodes, I ve to say this thing is f***t up gore s**t with less story .
But I will buy the dvds and the movie on bluray when it comes out in december.