I first watched Wolf’s Rain in 2003, just as I was beginning to ramp up my interest in anime. I remember a few things about it: being absolutely traumatised by its ending and being spell-bound by Yoko Kanno’s music. Following on from the similarly fondly remembered RahXephon, it made a fan of Studio Bones out of me, too. Which is to say, Wolf’s Rain became one of my favourites and just last week, nearly 10 years on(!), I finally re-watched it. 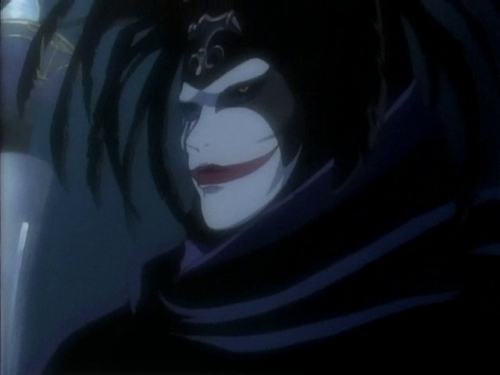 For a start, I couldn’t help comparing it to Darker than Black. Tensai Okamura directed both series and both have this enigmatic style I’ve taken to describing as the “two circles of Tensai Okamura.”
Two circles because it feels like in both there’s two stories working in parallel, independently of each other. In Darker than Black, there’s the syndicate controlling Hei’s movements and all the intrigue surrounding Hell’s and Heaven’s Gates, whilst in Wolf’s Rain, there’s the nobles warring between each other, sweeping up whole countries in their wake.
If what I’ve just described can be pointed to as the Outer Circles of Darker than Black and Wolf’s Rain, then the Inner Circles are the ones we directly follow. Hei slowly discovering his purpose in the former and the wolves’ search for paradise in the latter. Sometimes the circles’ converge, but I like the way Okamura seems to write as much for events off the screen as on it, his anime are different in that way, more alive. 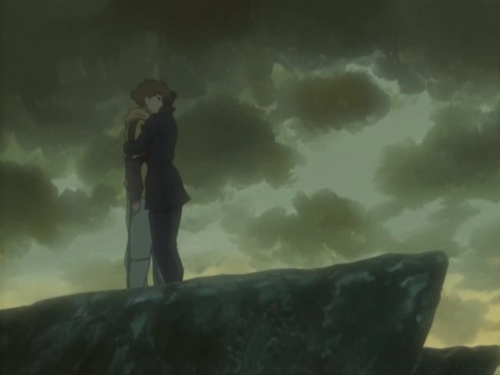 The world is being torn apart in Wolf’s Rain, whole cities fallen by the way-side, and no-one seems to be asking “why?” I prefer it that way, though. I’d rather use my imagination to fill the gaps, which is to say, I don’t think it’s a fault of the writing if a fantasy series fails to explain certain mysterious things.
Wolf’s Rain isn’t completely abstract, though. Well, the idea of paradise may be abstract, but their journey is one of companionship and sacrifice. My favourite scene in the whole series comes during the latter half of episode 26. 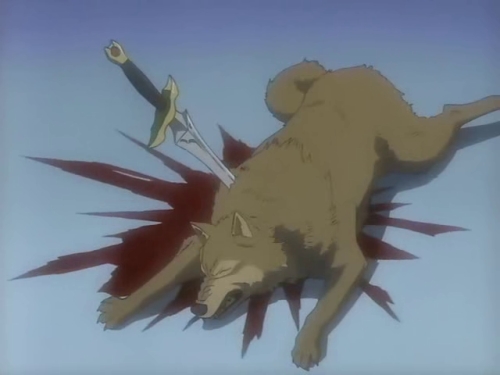 Darcia has broken free of Jagara’s false paradise, but is stabbed by her. Just as she’s about to deal him the final blow, Hige flies-in in his wolf form to attack her. He manages two rushes before she throws her sword at him like a javelin, impaling him through the side.
And then Kiba appears. “I’m going to reclaim our Paradise.”
It’s hard to describe it here because my memory of the scene is so intertwined with Yoko Kanno’s beautiful music. It’s such a shame that the specific track used in this scene was never released, but anyway, the music rises as Kiba appears, there to finish off Jagara and save his friends. Tsume and Toboe pull the sword from Hige and, despite his injury, he jumps straight back in after Jagara, desperate to prove his worth.
I’ve already mentioned Yoko Kanno a few times in this post, but one really can’t underplay how vital her music is to the series. This is her at the very top of her form, such a wonderful collection of acoustic, soft and swirling orchestral pieces so tightly woven into my recollection of the series that I’ve basically memorised scenes according to what song was playing in the background. 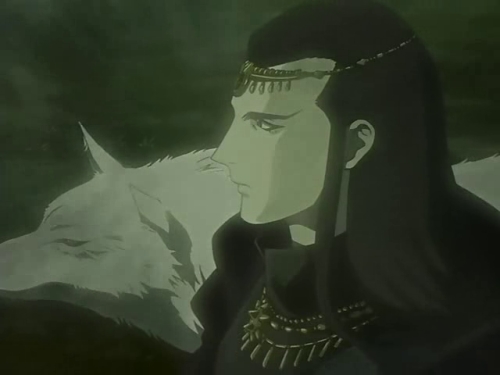 One can’t underplay Studio Bones’ work, either. I’m an animal lover anyway, but the way they’ve animated the wolves, the way they run, snarl and bite, is so affective. Wolves are strong, wild animals, yet Bones are able to conjure a sense of poetry and magic around them, as well as a painful sense of vulnerability. Humanity in Wolf’s Rain is rotten to the core, but the wolves are so idealistic and honest that to see them beaten down is almost too much to bare. 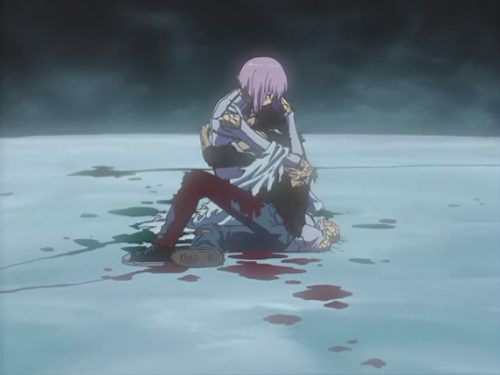 Which is all to say, Wolf’s Rain holds up well. It’s also the last TV series written by Keiko Nobumoto. She wrote Cowboy Bebop and Macross Plus, and, in a sense, this is a fading echo of that era. Along with Shinichiro Watanabe, she’s quietly disappeared, but I’d love to see them working together again. I miss anime like this.

Oooh, you made me want to rewatch Wolf’s Rain. It’s one of my favorite anime series ever, and like you it made me a fan of Bones as well. To think I watched it as it aired… was it really almost ten years ago?… orz
As for why the world is falling apart and Paradise and such, I had a pretty extensive theory (I don’t remember most of it, though – maybe if I rewatch it!), but I’m actually still pretty impressed how they managed to just make the world work with just a few hints and a mythology (that turned out to be true).
And the designs. I still love the designs, from the buildings and landscapes to the characters, especially the characters (and the wolves). I bought the artbook as soon as it came out and I still take it out every now and then. I think WR is one of Kawamoto Toshihiro’s best works, and my second favorite after the designs in Ayakashi ayashi. (That poor show. It had such potential… Ayakashi ayashi has to be the only series which has fallen victim of being shown in prime time.)
I wonder what happened to Nobumoto Keiko. Wikipedia has no info whatsoever on what she has been up to since 2003. Too bad, she had such talent.

Also! I forgot two things – one, the wolves. They are some of the most accurate animal portrayals I’ve ever seen in animation. Kawamoto wrote somewhere that he spent a lot of time researching wolf anatomy and behavior, and they had a “how to” guide for animators to be sure they don’t mess up.
Two, the seiyuu. Kiba is my second favorite Miyano role, right after Ouran High School’s Tamaki. His voice is perfect for the role, and he sounds so pure and earnest. I know there are no “what if”s, but I’m not sure the role would’ve worked as well with a different seiyuu playing Kiba.

The way they animated the wolves is poetry in motion, I fell straight back in love with the series as soon as I saw them and while I’m sure they weren’t easy to animate, the end result is so lively and full of heart as to move me. Really is some gorgeous art in this series.
I would love to read those interviews/articles about the series, btw.

I don’t know if the artbook has been released in English – it has a long interview with Kawamoto (not just about Wolf’s Rain), and also commentary on the development of the character designs. The DVDs also have some interviews with the staff… Too bad they never released a guidebook.

In one fell swoop you manage to write about two series I was planning on doing write ups about. I’ll just have to see how deep the well of interest in Darker than Black goes.

Darker than Black is a bottomless pit of a series. Make of that what you will! 🙂

I loved Wolf’s Rain until the recap episodes in the teens. From that point on it was downhill. It had a lot of potential but was a little too heart-breaking in the end. I don’t mind it when characters die, but there was no pay off (unlike when Spike dies at the end of Cowboy Bebop). Maybe I’m a little too bitter and should just give the series a rewatch. If I do, I’ll skip the opening song, “Stray.” ^_~

Aww, Stray is a little cheesy and eighties, but it’s still a fun song 🙂

Great to know another Wolf’s Rain fan ^_^ It’s been among my top 5 favorite anime since I first watched it in 2006. I’ve rewatched it many times over the years and love it more each time!
I never thought of comparing it to Darker Than Black, but you’re right that it has similarities. One thing (out of many) that makes Wolf’s Rain great is the conflicts among its characters – not just the wolves, but Cher, Hubb, and Quent especially. I found the background about the setting and Paradise a bit vague, but still enough to not seem incredibly confusing and allowing us to use our imaginations. I’m also an animal lover and think the wolves are animated great =D

Of the humans, I really liked Hubb. I’d forgotten how close he gets to paradise in the end and loved how he didn’t give up. Even in the face of the end of the world and without Cher, he still pushed himself as far as he could go 🙂

You know, despite enjoying Bones, Keiko Nobumto, Tensai Okamura and Yoko Kanno and all that, and despite it playing on Adult Swim about 14 times through back in the day, I have never sat down and watched Wolf’s Rain. Suppose I’m going to have to remedy that eventually. I also get a feeling from it that it’s one of the last vestiges of a certain kind of anime that doesn’t really happen anymore.

It’s worth it– it has an especially strong first 3-4 episodes and yeah, although I can’t pinpoint exactly what it is about anime like Wolf’s Rain, stuff like it just isn’t being made any more (the last attempt was perhaps Xam’d?)

I really loved Wolf’s rain but the end was just really upsetting.
I watched this AMV Lord Darcia II by Akadestu on youtube – and I need to say It was one of the really rare AMV about Wolfs’ rain that wasn’t upsetting – really should watch it!