In 2017, Masaaki Yuasa directed The Night Is Short, Walk on Girl, which is a film set in the same fictional universe as his 2010 series The Tatami Galaxy. I really liked The Tatami Galaxy. I remember thinking that it was a more conventional (and therefore more accessible) anime than his other works at the time (Mind Game, Kemonozume and Kaiba) but it was still unmistakably his anime: raw, hyperactive and cathartic. At that same time, I didn’t know anything about its author, a certain Tomihiko Morimi, who I’ve later realised has a signature style all of his own. He wrote The Eccentric Family too.

Tomihiko Morimi’s characters love to talk. One of the first things you’ll notice in The Tatami Galaxy is how it’s dialogue has this relentless rhythm of a machine-gun’s fire, like, it’s really hard to keep up. The Eccentric Family has a jazzier pace, but it’s nearly as dense. This is no bad thing, it’s actually really charming, but it’s also one of things that sets Morimi apart. The Night Is Short, Walk on Girl is no different, it talks like a machine-gun from the first to the last. 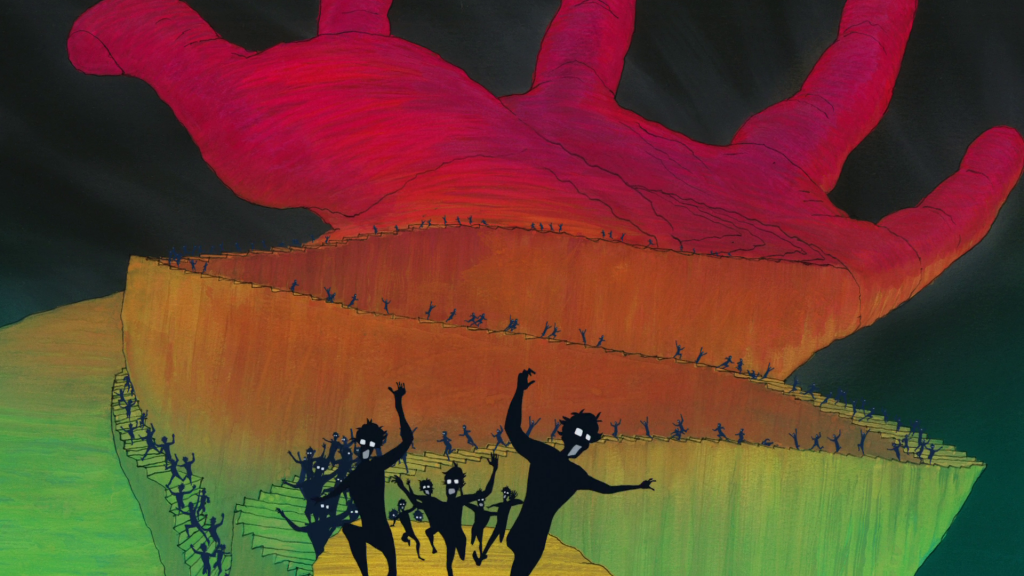 We’re launched into a night that goes on and on. The kind of night we’d all remember for years later. A bunch of young adults are out on the town, wandering from bars to festivals, getting drunk and trying their damnedest to find true love; intoxicated by the idea of fate, that fate will take over when your One appears. Your fated love could be right in front of you, but if you do nothing about it, that same love will leave through the door without ever knowing how you felt. So, confess, you fools!
Confessions in The Night Is Short, Walk on Girl are elaborate, crazy things, orchestrated by fools. Morimi writes great romantic fools. Yuasa draws great romantic fools. The soundtrack from Michiru Ōshima is, as ever, on point.