I was always going to like Kaiba. Even before it started airing, I had, somewhat dangerously, convinced myself that it would be good. After all, with someone like Masaaki Yuasa directing, I had to expect it would special and well, some five months later, here we are again, I just finished Kaiba this weekend.

Lets allay some fears right now. Despite its polarizing visual style and artsy pedigree, Kaiba absolutely isn’t high falutin or pretentious, it is heartfelt and emotional, exciting and twisted, and most of all, character driven. It’s true that Yuasa occasionally indulges in daunting surrealism, no doubt the last episode is a testament to that, but I really hope that you watch Kaiba, because it is lovely.

Well, that’s a half truth. Kaiba is lovely, and sweet, and romantic, but it’s also tragic, and sad, and harsh. I’m recalling a line from Kino’s Journey that comes to mind, that “The world is not beautiful, therefore it is”. This is Kaiba, I think. An idealistic, almost child-like search for some meaning in life within a universe where human memory, the very essence of individuality, is ephemeral, readily transferred into tiny, fragile metal chips and where dreams are copied, fabricated and deleted. 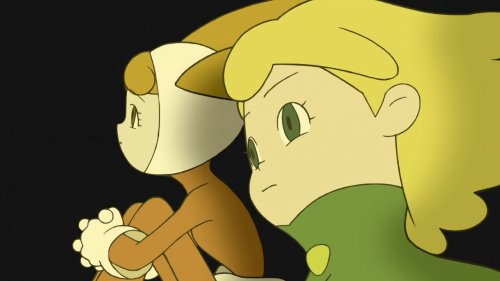 People are weak little things, really. Our dreams are many, and many of them are impossible, but we strive on anyway. One watches Kaiba and feels this romantic melancholy for life, that every person, all of us, might as well be reduced to a grain of sand on a golden beach, one of countless millions, yet we all keep on believing that we can make a difference, or do something important. Sometimes we find happiness, other times not. Kaiba is beautiful for allowing a human life to blossom, like how a flower might sneak through the cracks of a concrete road, only to then be crushed underfoot. A life that was once so hopeful can be extinguished in an instant, lost forever, just another grain of sand. But if life is so insignificant, what is the point of living? Why not just give up? 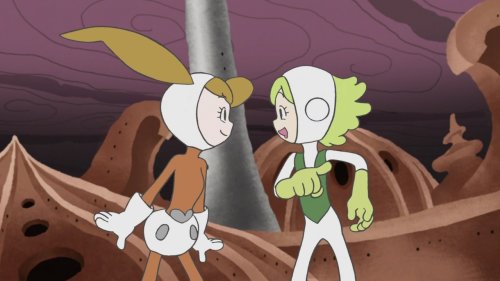 Above all else, Kaiba is a love story. When Warp and Neiro fall from their lost palace and slip into the amnesia cloud below, Warp’s only concern is for his beloved Neiro’s memories, even at the cost of his own. They roll around in Neiro’s room, drunk, happy, absolutely content within the intimacy of the other’s company, they remain scared, fragile and lost, but they have each other, and that’s enough, I think. Likewise, Popo only realizes the hollowness of his rise to power after his last remaining friend has had her memories erased, “Don’t forget me!” he screams, but it’s too late, everything he strived for has been forgotten. We live for each other, a mother for her son, a boy for his friend, one lover for another. That’s why giving up isn’t an option, our dreams might be hopeless, but they keep us alive long enough to find a friend, a kindred spirit. 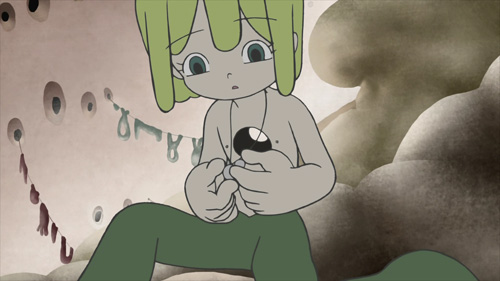 Apologies, I know things have been quiet around here of late. While everyone gets so excited about all this new anime airing in Japan, I just get tired of it. There’s too much to watch, too much to read and too much to say. It tires me out just thinking about it, so, despite having downloaded first episodes of 9 different anime last week, I’ve watched merely two. One was Code Geass, which, true to form, was great, stupid fun, and the other was Kaiba, a show I’ve been anticipating since, well… forever. But wait, Kaiba hasn’t been fansubbed (yet), right? Such enthusiasm forced me into yesterday’s impulsive decision; I decided to watch it raw. For the record, my understanding of Japanese is next to nothing and never before have I bothered to watch anime untranslated, but, at this point, I may as well just quit anime blogging if not inspired by something like Kaiba, something that’s so completely new. Code Geass R2 isn’t new; it’s just the same old collection of genres with a different lick of paint. Mecha, shonen, shojo, moe, harem, sports, we’ve seen it all before, but let me tell you this, you’ve seen nothing like Kaiba. Asked to describe the story, director Masaaki Yuasa mentioned suspense, romance, science fiction, comedy and action, and depending on your perception, it’s all of that, or nothing, but at least it’s new. 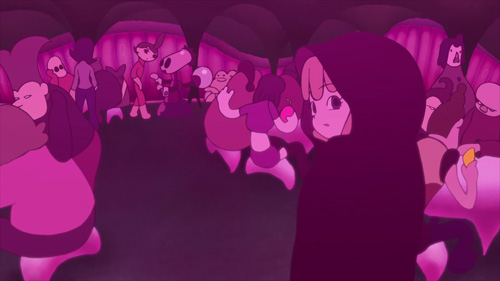 I won’t bother with an extended episode synopsis, as aside from my noted lack of comprehension regarding the Japanese language, Owen and BluWacky have recently posted some fine coverage on their blogs too. All I really want to say is that I liked it, a lot. With an aesthetic that’s part Astro Boy-era Tekuza, part Flintstones, it certainly looks different. It’s nothing like Yuasa’s previous work, Kemonozume, where the characters were grungy, gritty and blue (in the greasy, erotic sense). Here, the designs are clear and bright, as if lacking sophistication, an obvious ploy to violently contrast a playful, child-like aesthetic with a disturbing reality tainted with memory-stealing and body swapping. I’m reminded of Roald Dahl’s twisted style of storytelling, especially The BFG; all the excitement of Sophie’s wide-eyed adventure into a hidden world of friendly giants, offset when she discovers that they munch on humans. 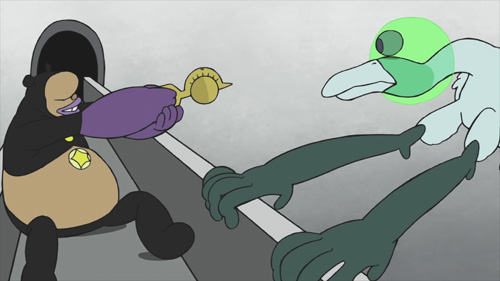 The evocative visuals are well-matched by a soundtrack that’s ambient, electronic and artificial, yet emphasizes the fantasy and excitement on screen. In truth, it’s wonderfully apt for Kaiba, as a story so removed from reality shouldn’t sound familiar or contemporary; in particular, the opening and ending sequences are beautifully presented; setting the tone for what is an escape into a dream-like, distant plain of imagination.

People might think I’m talking this up because it’s different, because it looks weird. If that were the case, I wouldn’t be writing this now. It’s true that it’s unconventional, you won’t immediately feel empathy for the characters, or understand their feelings. You have to be prepared to submerge yourself in Kaiba, to accept things that might be unrealistic and weird. In this sense, it’s absolutely authentic animation; the product of boundless imagination, and it works because, despite everything, it still feels human; funny, weird and sad. I hope you like it!

Twitch has linked the Kaiba teaser. It’s only 15 seconds long, but already, I’m getting good feelings about this. It’s looking very dreamy, very surreal and very innocent. Just what I expected. The thing is, Masaaki Yuasa is such an auteur, and his style is so utterly foreign compared to the norm, that he’s regularly shunned by anime fans. The few spring previews I’ve read reveal as much. Ironically though, Yuasa and Kaiba represent everything that’s so great about Japanese animation, outsiders (as in, not die-hard anime fans) look at it and see quality, but the otaku are too caught up in aesthetic doubt, fawning over the same old and being flat out lazy in refusing to accept something that looks a little different. Therefore, we’re in this funny position where Kaiba’s being hotly anticipated on popular indie-film sites like Twitch, yet completely ignored by anime fandom itself. Something is seriously wrong with this; that the most talented directors working in anime aren’t being recognised within the so-called anime community itself is both baffling and stupid.