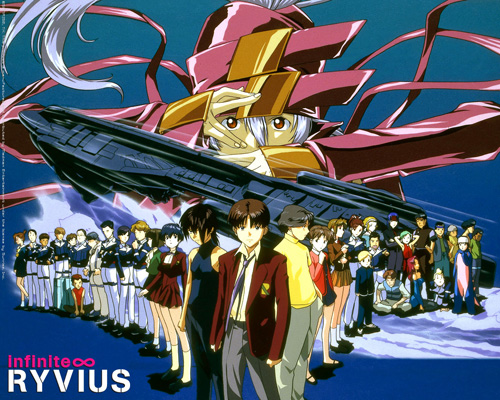 I’ve just spent the last few hours messing around on MyAnimeList. The result? This is the closest I’ve come to realizing how much anime I’ve actually consumed over the years. Apparently, I’ve completed 70 TV series, 51 OVAs and 61 movies, and out of all that, I’m dishing out an average score of 7.9 out of 10. I’m not sure how to feel; I’m totally satisfied to finally have a decent gauge on all this anime “stuff” I’ve been watching, but at the same time, it’s rather like an alcoholic discovering the depths of his addiction… Well, it’s not that bad, but you get the point.
Anyway, ripping my way through the MAL anime archives, I came across a couple of series I’d loved for a few weeks and then, for whatever reason, had just totally forgotten. The one that struck me most was “Infinite Ryvius” (1999). I must have watched it back during 2004, because while I have these vivid memories of the show, I discovered it around about the same time that my interest in anime had ramped up into overdrive. I was grabbing as much as I could find (probably working my way through the AnimeNFO.com top 200) and as a result, almost everything from that period was great, but whenever I try to reel off my favorites, I can only recall the familiar names like “Berserk” and “Cowboy Bebop”; the rest is forgotten, almost like fading in the noise of time.
I don’t want to forget Infinite Ryvius. It’s by no means a masterpiece, but it’s fascinating and excellent, none the less. Sometimes, I find it hard to go back and watch my absolute favorites; recalling all that emotion you felt first time around, will it be the same on replay? I don’t want to invalidate those feelings by going back and realizing that, actually, my favorite anime sucks. Something like Infinite Ryvius is safe ground; it doesn’t have that sentimental weight of being the “BEST ANIME EVER!!” but regardless, I remember it being good; that’s enough.
This is perhaps as good a testament to my love of anime as I can offer. As much as it may seem like I’m swinging between love and hate, or constantly searching for the next big thing, I really don’t need any of that to feel the warmth and fondness I have for these stupid shows. I can’t really explain exactly why I’m an anime fan, but I expect that answer lies in my continued attraction to series like Infinite Ryvius.

14 replies on “When merely good anime is good enough”

As you can see from my friends list, we’ve been busy. I got a bunch of folks from The ABC to join as of late. Also, wow @ Medium-High compatibility.
Your observations about anime ratings on retrospective are spot on, in any case. I find myself wondering how exactly and how fairly do I rate them — the Love Hina anime, as an example, probably warranted a 10 when I watched it then. Viewed through the critical lens I employ now, it’s only a 7 (the manga, however, will always be good, ensuring it a hefty 8).
I certainly enjoyed them. The question of me enjoying them now will remain a puzzle, however. As long as I don’t bust open that old Pandora’s Box I guess I should remain safe, and I’d like to think that I’m rating the old anime impartially… at least for now.

Sentimental favorites are a good thing. So what if you’re looking back on the past with rose-tinted glasses? It looks better that way. 🙂
Ultimately, it’s just a fun hobby. Sure there are rare gems that have something deeper to offer, but in the end it’s just about having fun; good old-fashioned entertainment and escapism.

Oh no, here we go with more MALing! I’ve been converted recently too, and I’d have to agree that it’s nice remembering the anime I’ve watched before. Some I’d totally forgotten about and remembered how amazing they were. Others I’ve passed by and said “Wow, I can’t believe I watched all that.” xD
Ryvius has been on my “to watch” list for awhile. Maybe I’ll give it a spin.

I’ve only heard of Infinite Ryvius recently but I keep hearing really good things about it. I will have to add that to my eventually watch list (this is a mental list I should make an online list like that).
On a side note of your “planned to watch list” my favorite is Porco Rosso. I love that movie. Whisper of the Heart is pretty good too.

hehe im more of an anidb person. it was one of the first anime sites i discovered. and like bateszi when i discovered anime i was making my way through animenfo top 200. man that was such great times lol. i was a sophomore in college and i had a new addiction lol. In regards to infinite ryvius, i thought it was phenomenal. If the character designs were better it would have been so close to perfect. I truly love that show and i remember that i had tried to watch it twice and gave up. the third time i was just blown away. i think its pretty incredible.

Did I start a MAL chain when I told Owen about it way back when? o_o
Anyways, I have the Infinite Ryvius boxset, though I’ve only watched the first episode due to time and backlog.
I have those same fears when going back to watch my very favorite shows. After all, we all change over time, and our perspectives with it. I find that when I can still find something new that I enjoy about the show, as well as moments that make me remember why I loved it in the first place, that feeling of worry shouldn’t really be there. There’s a reason why you find them your favorites, but don’t be afraid if that reason isn’t enough to warrant it anymore, I guess. 😛

Oh I loved this show, I remember watching it way back when..I think it was around the bad quality tape days. I loved the show then and I still do, actually I really think its excellent now cause its hard to come across such a great show driven by meticulous character studies. They did an great job with the conflicts I thought it was spot on. Oh and Hisashi Hirai’s character designs were good and had a bucket full of variety compared to his recent work. (Heroic Age was a horrible horrible show with lots of potential, but it did have decent character designs so he might be getting better as of late..I don’t know lol) More of this less of the moe-bishoujo crap please!

@Owen
Seems like the season’s ripe for MAL membership. I didn’t realise there was such a strong contingent of anime bloggers on there. Also, it turned out my other site “Anime UK News” has a club on there too. Definitely pleasantly surprised to find so many familiar faces anyway. If any other readers of this blog want to stick me on their friends list, please go ahead.
Also, I don’t think I could ever be impartial with regards to my favourite anime; even if they don’t merit much of a replay, I think I like to record the fact that a certain series really profoundly moved me. I’m scoring certain anime with 10/10 for that reason, not because they achieve perfection, but something about them will totally affect the way I view life, literally or philosophically.
@0rion
You finally commented on my blog, seemed like you were commenting on everyone’s but mine until now 😉
@Totali
Do give Ryvius a spin. Despite the fact it’s from 1999 (I can’t believe that’s nearly ten years ago!), it’s a really fascinating anime.
@Kim
I’m sure you’d love Ryvius. Aside from the fact it looks a lot like Gundam SEED (animated by Sunrise and same character designer), it’s a rather interesting take on the “Lord of the Flies” concept of what happens when a bunch of kids are lost in space with no adults to control them. Through out the series there are a bunch of power struggles as it shifts between differing political ideologies. Also, it’s from the same director as Planetes and Code Geass (not sure if you’d like Geass or not; it’s very much a guilty pleasure.)… He’s definitely one of my favourite anime directors.
Finally, do sign up to MAL. I’d love to know what anime you’ve seen since we seem to have almost identical taste. I’ll be sure to take you up on your recommendation of Porco Rosso and Whisper of the Heart.
@kauldron26
I can only agree… It’s frustrating how it’s somewhat forgotten, but it’s obscurity just gives me more reason to try and replay it some time. Hopefully the DVDs are still in production – I might get it for Christmas. Also, I could never work out how to use the anidb website… Maybe it’s just that the layout is confusing me?
@TheBigN
So all this MAL business is your fault then! Good work! 🙂 Also, be sure to get on top of Ryvius, you’re missing out on a great series that’s well worth looking at.
@Ivy
Yup, I totally agree. It’s a rather unpresidented look at how personalities and morals will often change when we’re forced into a corner. It’s really amazing watching it because we see how these apparently normal people suddenly transform into tyrants or visa-versa. I’m not sure why it’s not more renowned as a classic anime series – though I suspect it’s character designs make it look disposable and cliche, much like SEED, when quite clearly, Ryvius is so much better than that.

I ended up signing up for MAL last night but I am still working on adding the series and rating them. My ratings end up looking really low because I don’t give out 10’s easily.
On a side note I do enjoy Code Geass but mainly for Lelouch. I think he is a really interesting character. However I am not much of a fan of anything else concerning the series. I am loving what I’ve watched of Planetes so far though. 🙂

I’ve had an AnimeSeen list set up recently but the ‘community spirit’ that exists on MAL tempts me to join that too. It’s only when you do this sort of list-making that you sit back and think “bloody hell, I’ve watched a lot!” It’s quite frightening in some ways…

I noticed that you abandonned the anime “Pumpkin Scissors.” I’m going to go ahead and say that this was one of the best decisions you could have possibly made. I watched the first 6 or so episodes and was ridiculously excited about the guy who was standing up to tanks, going all psycho and absolutely wrecking people with complete disregard for his own body.
Then I watched 20 episodes in a row where that same badass did absolutely nothing, with the finale being similar to the end to a bad 3-episode Naruto filler arc.

[…] you said so, whether you remembered when you said it or not. It’s that warm nostalgia that appeals to Bateszi I think. The continuum is like a soulless void without memory in comparison to the safety of […]

[…] feels old. For example, I’ll always remember Hirai’s drawing style for his work on 1999’s Infinite Ryvius (and later, 2002’s Gundam SEED,) but there’s other points of reference, too, like how it has an […]