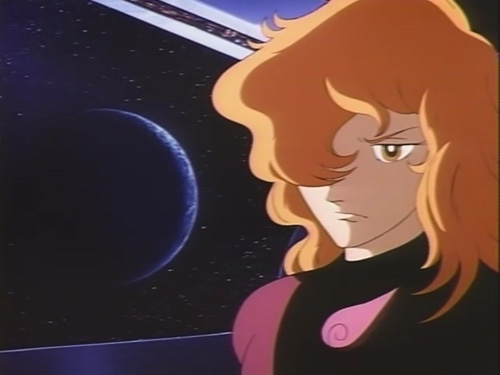 Although I like to recommend older anime, sometimes even I can find it hard to sit through something that was created in decades past. My problem isn’t necessarily anything to do with the old fashioned animation or digging the vintage aesthetic, rather I have issues with the story telling; while modern anime flows and climaxes with a clearly calculated (and looking at the “moe” genre, I should say cynical) vision, much from the “classic” era of anime (running from the 1970s until the mid/late 1980s) seems prone to eccentric (almost goofy) characterisation and a choppy sense of direction (I’ve been burnt by watching too much Yoshiyuki Tomino anime). Basically, old anime clearly feels different, foreign and slower, and compared with the break-neck pace of today’s offerings, it can be hard to acclimatise, but, and I want to make this clear, it’s worth making all the effort you can muster to watch the 1980 movie version of Toward the Terra (a.k.a Terra e), especially if you loved the 2007 TV series; indeed, it’s just as good.
If you can remember my original review of Toward the Terra, I lamented it’s somewhat cliche opening few episodes. Our hero Jomy discovers that he’s a part of the psychic Mu tribe and retreats into obligatory phases of angst and denial. This was probably the most boring and over-wrought section of the TV series, but the movie really captures the chilling reality of living within such a strict society; a place where daring to question the rules is met with only one answer, execution. When Jomy is forced to leave his mother behind, knowing full well all his beloved memories are to be erased, it feels genuinely wrong, unnatural and ultimately, painful. His liberation is a relief. 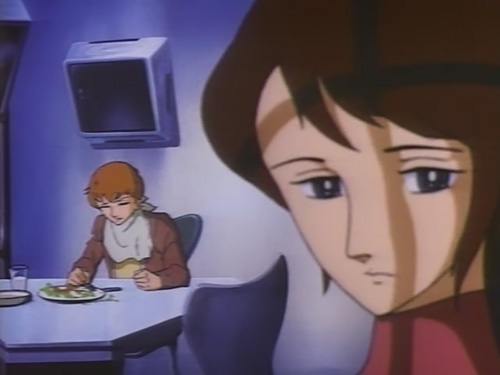 The other major difference between the TV series and the movie is a delicate romance between Jomy and Karina, which ultimately conceives the precocious nipper Tony; the first natural-born human for decades. This thread includes the particularly lovable scene of a nervous Jomy strutting back and forth in a hospital waiting-room while Karina is in labour. For some reason, and no doubt, to the delight of the shonen-ai fans, they never hooked up in the TV series, but Tony ended up regarding Jomy as his “grand-father” anyway. 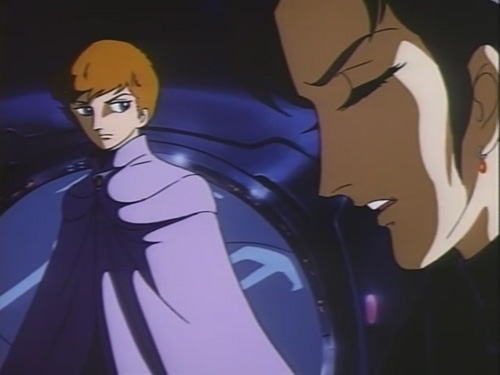 Of course, since the movie runs a little less than 2hrs, which is a paltry sum compared to the nigh-on 10hrs worth of TV episodes, there are a number of secondary characters who either lose a lot of their importance or simply don’t appear at all. Soldier Blue, Matsuka and especially Shiroei show up for little more than confusing cameo roles before being cast aside, while Swena is no where to be found at all. Thankfully, Keith was as interesting as I remembered him; a callous monster willing to commit mass-genocide while his lonely soul gradually discovers empathy in the Mu’s struggle for peace. 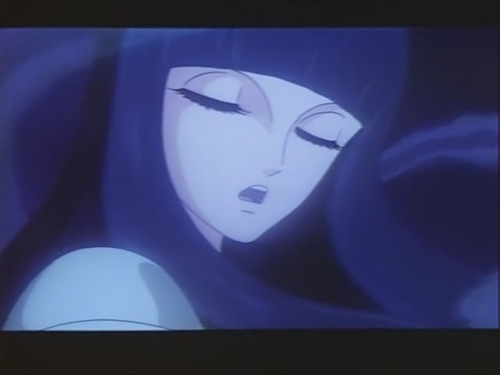 The end of both versions is very similar, though if just for clarity’s sake, I prefer the epilogue of the film which better explains the purpose of the Mu. They are created and allowed to live, despite ostensibly being hunted, because potentially, they represent the next stage in man’s evolution. Butchering the Mu at birth could be seen as akin to forsaking humanity’s future and condemning the next generation to weakness; forever mollycoddled by the all-powerful computer system that’s simply maintaining the status quo. That the Mu survives given a slim chance, and begins to thrive in the face of such odds suggests, as Darwin’s Law would have it, that they are the future. 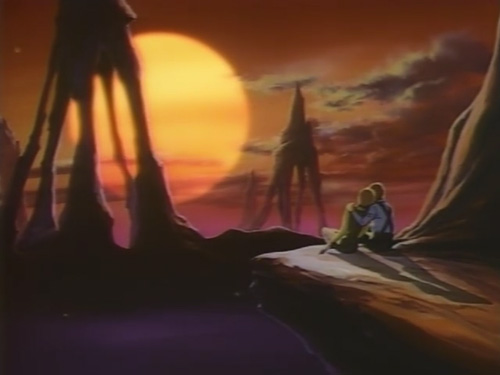 There is so much more to say about the story, but I’ll leave it at that until I get around to reading Keiko Takemiya’s award-winning original manga too. Along with several others, she pioneered shojo manga and it amazes me to think she started writing this in 1977 (and finished in 1980); it’s so old and yet, I love it; completely and utterly. Be it 1980 or 2008, To Terra…. is just a wonderful story, a timeless one, even, that I can always watch or read and be completely lost in imagination.

I haven’t seen either the anime or the movie, but I did read the whole manga. I dunno if I could take a whole series of Terra e (seems like it’d be stretching out the story) but I could probably do a movie.
It seems they developed Jomy and Karina’s relationship in the animated versions, because I don’t really remember it being a big deal in the manga.

The series is stretched out for the first couple of episodes or so, but once Jomy leaves Ataraxia with the Mu, it’s really damn good. I definitely recommend it, anyway, especially since it seems like every version of the story is slightly different to the next. To that end, I’m really looking forward to finally reading the manga and experiencing the original story first hand.
The funny thing about Terra e is that it didn’t immediately strike me as a fantastic story or anything like that. I went into it expecting some kind of bishonen nonsense, but the story gradually sunk its claws into me and the more I saw, the more I liked, to the point now where I’m still thinking about it some 3 to 4 months after I finished the TV series. May be it’s just one of those quirky personal things, but I just adore the story, the characters and the way everything unfolds over entire decades of time.

I loved Terra e . . ., though I struggled to get into it. But, given my narrative obsessions, I’m not sure I could take a film which tells the same skeleton story so soon after seeing the series. Perhaps I’ll file it away and watch it in a year or so’s time.

I really need to watch this movie now. I loved the series. In fact your entry on terra e is how I found this blog in the first place. 🙂
I am really surprised the series was so under the radar. I would think epic sci-fi would be right up anime fans alleys. I guess I don’t understand anime fandom at all.

I think I’ll have to add this to my to-watch list, what with free time denying me the opportunity to watch the series in full in the near-future. Actually, it sounds like a better plan to see the movie first anyway.
You’ve definitely hit on an important point with how the ‘old school’ stuff differs – after watching the ‘Do You Remember Love?’ Macross feature film, I was acutely aware of how it’s clumsier in storytelling when placed alongside the more mature and assured directing of Plus. On the other hand, it’s still a great story and for its time the animation is actually quite impressive.

@IKnight: Or better yet, pick up the manga. Apparently it’s only three volumes and no doubt, it could use the extra sales. I’m sure you’d be surprised by how much has changed from the original text (especially something that happens to Jomy after the attack on Nasca).
@Kim: Given what’s popular amongst anime fans today, I think I’d rather not bother to understand their tastes. The funny thing is Toward the Terra was actually airing in the same timeslot as FMA and Gundam 00, so Japan obviously thought it had an audience, but it just never caught on with the international scene, while at the same time, something as stupid as Code Geass was constantly attracting attention. Thinking about that makes me die inside.
Anyway, good to know you found this blog through that review of Terra. When I wrote it, I wasn’t expecting to find many other people watching but it turned out there were a fair few of us out there! Also, I take it you had a good holiday in Israel?
@Martin: I guess because anime was still a relatively young concept in Japan at the time, we frequently see odd mixtures of wonderful beauty – no doubt through an animator or director just being brave and trying something new – and almost amatuerish naivety in terms of awkward characterisation or humor. The anime industry has changed so much in just a few decades as generation after generation build up experience, the only side-effect being that once the rules have been established, we start to see waves of generic trash and an almost inbred distillation of what works, to the point now where we have character designs and so on that all look the same and all conform to the same formula.

welp i suppose i ought to move terra e…to the top of my list now
i dont really know the story that well having seen only the first episode, but i didnt really find it that cheesy…but then again i do love me some space-melodramas, and i love the screenshots you posted…im a sucker for that old school look and feel, and also the depth that may or may not be around these days
although maybe i ought to put this off till i finish a few more seasons of Gundam…
either way pretentious futuristic sci-fi FTW!

I’ve just finished watching this anime and I can say that the story is very captivating! I was already hooked at episode 1 and I couldn’t stop watching it, leaving me with dark circles under my eyes the next day.
Honestly at first glance I thought it was another pointless anime, the title didn’t ring the bell, the art was old… but I gave it a try.
The character development was wonderful. Everybody is just unique.
Jomy, who was always afraid, turned out to be a strong leader. Blue was just cool, I don’t think he had any change…but too bad he had to die early. OH yes, the elders who died in order to let the next generation live on, because they were a bunch of blockheads before. Keith, who I thought was cold as ice, but was choking in his tears deep inside (but the fact that he killed Shiroe and obeyed Mother just made me go woah!). I want to talk about other characters too but I think I’m typing too much heh. Also… The story was deep enough to make us think about the whole SD system, the Mu, the Mothers, unlike other any anime nowadays (what I’m trying to say is that anime nowadays have no meaning to the story), and it’s so moving and truly sad (I cried).
It’s sad that Toward the Terra isn’t recognized…
I’m very happy to find a blog about Terra~ If if there were a way to get people interested into this! I miss Terra already~

I came across this review through a google search right after finishing the movie. I watched the movie because I wanted to know the difference between the manga, anime and movie [and now I have to go and find the manga]
Indeed the movie is amazing. Although cramming such a long storyline within only 2 hours really made it a bit disjointed at places, methinks.
I don’t really like how Tony is Jomy’s son in this version though- there isn’t enough significance placed on it. At least with the manga and anime, even though he isn’t Jomy’s son, one can see that Jomy’s affection [no, not in the yaoi sense] towards tony, yet in the movie very few interaction between is shown.
The epilogue of the movie, I have a suspicion that I haven’t seen it… Does it follow the credits? Because my version ended with both humans and Mu watching the Sun rise on Terra.
I read that you think Keith’s villany began with him shooting Shiroe. Interestingly enough I think the exact opposite, that he only starts to question the Mother system because of Shiroe’s death.
All in all, sorry for the sudden comment, but I’m too excited to find other fans of this series [and there really aren’t enough people appreciating it;]