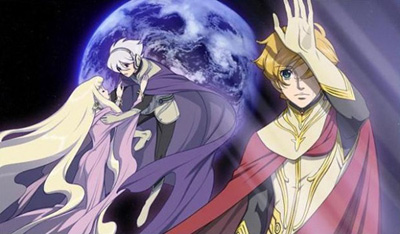 A lot of great anime premiered in the 2007 spring season. In fact, there is too much to mention, and for that reason, I suppose many people overlooked Toward the Terra. I struggled through the first four or five episodes and was feeling pretty apathetic about it myself.
The truth is that it begins with a very cliche first five episodes — basically, our hero Jomy, the blonde pretty boy with psychic powers, inadvertently uncovers this gigantic government conspiracy and after barely escaping with his life, joins the rebel forces in escaping the genocidal forces of mankind. It’s fairly standard science fiction stuff, especially in this post-Matrix era, and it seems worse because it’s directed in such a melodramatic fashion.
Everything changes when we meet Keith Anyan, an artificial human groomed by "mother" (the all controlling computer system) to be the perfect soldier. Keith is the primary villain of the show, but when we first meet him, he is but a promising young man training for an "elite" career in the military. There is little or no hint of the demon that as of episode 17, willingly unleashes the "flames of hell" by firing the Megido, a gigantic, planet destroying weapon worthy of Gunbuster.
I’m writing all this because I’m falling for Toward the Terra. It makes exciting use of a fascinating narrative structure that, over the last 17 installments, has made several decade-long time leaps; we’ve seen confused teenagers growing into charismatic leaders as an entire race of people (the Mu — Jomy’s race of psychic humans) immigrate across space and settle on an uninhabited planet, only to be blasted off when the humans hunt them down. There are no fillers or "padding" episodes, every scene is dense with plot, moving the narrative ever onwards. As it turns out, Towards the Terra has a lot to say.
This is a series that doesn’t much care for human nature and our fear of the unknown. Understandably, the Mu just want to live in peace, but typically, us humans aren’t having it. This is underpinned with a healthy mistrust of technology — as pointed out above, modern man is controlled for his own good by "mother"; an evil computer system apparently inflicted with the same fears, discrimination and concerns as ourselves.
Jomy and Keith are two sides of the same coin; Jomy’s an ardent pacifist with his heart set on peace, only using his immense powers to protect, while Keith is the perfect soldier; he follows every order, no matter how morally redundant; he is programmed to hate – he is a monster. On an individual basis, the Mu is so much stronger than the average human, yet they are good-willed people, and therefore, pushovers. However, that’s all about to change as in one of the most interesting developments yet, the latest generation of Mu children born on the destroyed planet of Nasca have inherited that "will of the flame" and like their human enemies, are strong-willed, aggressive and powerful. The message? Hate begets hate. Basically, the bully is about to get pay-back; sucks to be human! 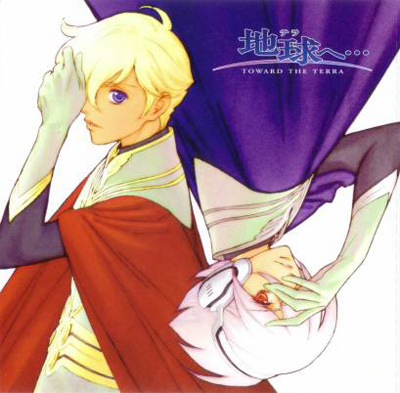 It’s an interesting twist of ideologies. Jomy will have to try and reign in on the growing aggression within the Mu and teach them that an eye for an eye will do nothing but perpetuate the violence, while Keith, sooner or later, will be forced to question his orders and recognise the value of every life, human or otherwise.
With all this in mind, I have to admit that I’m disappointed by the small number of people watching Toward the Terra. No doubt, many will be turned off by the straight laced, conservative characterisation; there is little to no humour, crude fan-service or eccentricities; it’s very serious. Similarly, the retro-1980s aesthetic is rarely popular these days. All of this, coupled with the generic opening episodes, appear to have resulted in a relatively small audience and honestly, it’s a great shame – the thought provoking and fascinating Toward the Terra deserves better.