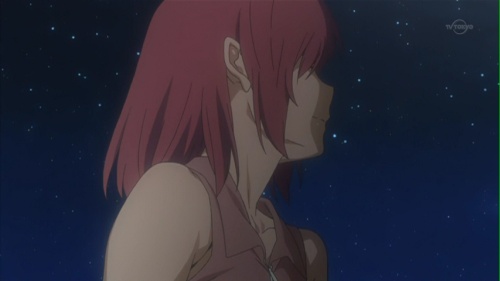 I am enjoying Toradora, or rather, it’s something more like tainted enjoyment. The show is marked by several moments of evocative character insight, like eloquent sparks of light that flicker briefly across some hidden depths. They are such brief vignettes, beautiful, but they aren’t really enough for me to say that this is excellent anime. The characters spend the majority of every episode playing dumb, acting up to their generic archetypes, only to suddenly pull back, to reveal something different, a moment of insecurity, doubt or confusion. Then, just as rapidly, everything switches back to the same old stupid jokes and harem routine.
With this vague sense that something is desperately trying to break free, I keep on watching. Toradora could quite easily pass for harem anime, with the overriding emphasis on the female characters and their attachment to lead-boy Ryuuji, but it isn’t quite that generic. I suppose I like the characters, I like how they seem to be, on the one hand, so archetypal and monotone, but on the other, so clearly fraught with emotion. In that way, Toradora can be a really sweet story. 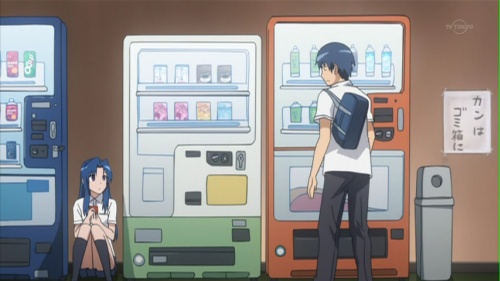 Saying something, but meaning the exact opposite, all to avoid being hurt. Minori and Ami are particularly interesting, since both go to such great lengths to conceal their true feelings. The former tries to avoid feeling anything at all by being so energetic and competitive, while the latter’s superficial facade is too nice and cute. Ami sits in-between the vending machines at her school, cramped and alone, but able to drop her facade for a precious few minutes. Gazing into the starry night, Minori tries to conceal the loneliness that forever tugs at her heart. Both seem to be struggling with life, insecure around others, just wanting to fit in, to live a normal life, have a normal love, but what is normal, anyway? Societal expectations can be a bitch.
I still feel like I can’t completely give myself to Toradora, but, in an emotional sense, I think I understand the characters. At times, they are funny and superficial, at others, serious and deep. I want them to be happy, to feel better about themselves. Their whole situation may be a little contrived, but that’s alright. I suppose every story is contrived anyway, all that should matter is empathy, and I get that from Toradora.