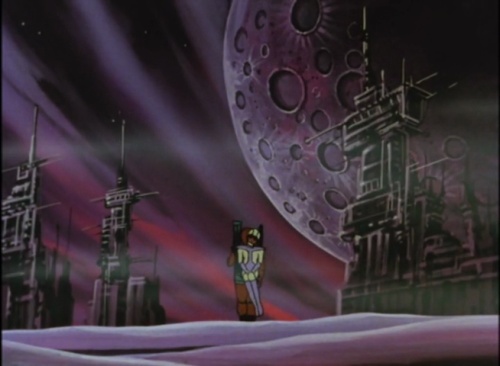 Being a blogger, I feel like I’m constantly walking this tight rope between accessibility and obscurity. Only a handful of people will have seen Votoms, and even less will be interested in watching it, so, why the hell am I doing this? What is the point if I am just talking to myself?
It’s an honesty thing. A big part of why I’m here is to recommend anime worth watching, and my basic opinion is that I think Votoms is good, therefore, here we are. I persevered with this series because I trusted in someone else’s opinion, and besides, I wouldn’t be a particularly worthy blogger if I didn’t write about anime I’m enjoying, right?
I don’t usually feel like I have to explain something like that, but this is a particular case where the series takes its time to get going. The arc of Votoms I really want to write about is ‘Deadworld Sunsa’, which happens to be smack bang in the middle, between episodes 28 to 39. 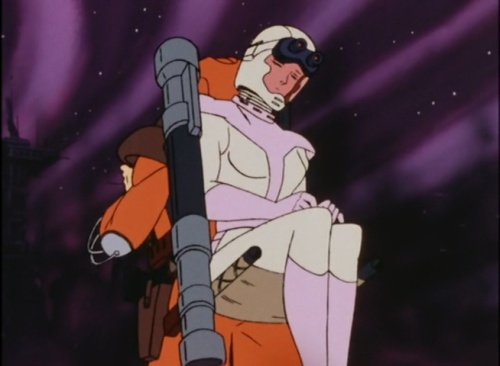 It begins when the main character, Chirico, and his beautiful companion Fyana, awake to find themselves aboard a huge space cruiser. It’s completely abandoned, built with a foreign technology, and carrying them towards an unknown destination. Every few hours, without fail, the deadly quiet is ruined by sounds and images of massacre; the screams of the dead and the mechanical clanks of conflicts long since past stream across every monitor, echoing through the huge, empty corridors. They haunt Chirico with memories of his past; he used to be a ‘Red Shoulder’, a merciless band of soldiers feared for their war atrocities.
At the same time, their cruiser is periodically attacked by outside aggressors seeking to understand and control its many secrets, culminating in a crash landing on the planet Sunsa.
It’s a barren land and low on oxygen. Fyana’s health deteriorates and Chirico is forced to trek across hundreds of miles of desert in search of supplies, with her strapped to his back.
That is but a bare introduction to the plot, and one that omits many wonderful little details. I mentioned before that Chirico carries Fyana across the desert, the act in itself a heart-rending thing, but even more so in the way that Chirico carefully fashions her chair from assorted scrap-metal, which he then attaches to his back. It’s probably the first time he has created anything intended to help, rather than destroy, and being a fairly reserved guy, it is, in such a lovely and indirect style, Chirico’s own way of showing how much he cares about Fyana. 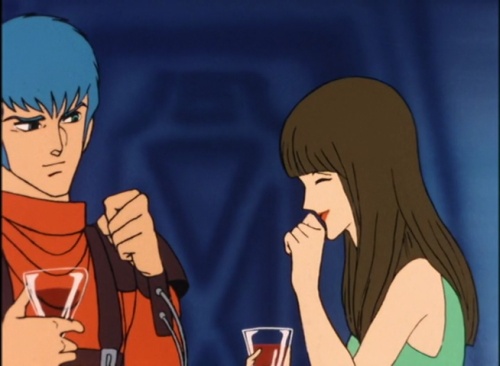 I have noted one particular line in the opening theme that I think poetically captures the essence of Votoms; it reads "choked by the scent of flames that seems to cling to me", which is so apt. In one of his final exchanges with arch-nemesis Ypsilon, Chirico advises that "there is no glory in combat". Ypsilon is a prideful warrior, born and bred to fight, and dares not contemplate what else there is to life, because without that scent of flames, he has nothing.
I’m finding this a difficult series to recommend because it’s visibly aged, long and slow, but I want to recommend it anyway, because it’s intelligent, serious science fiction with a strong sense of purpose, which is a genre I’ll always love. It starts out good and gradually gets better, but it requires effort too, because you won’t fall for these characters immediately. It takes time, and I think you know by now whether or not you’re willing to grant that. I’m at a point where I’ve seen most of the well-known classics of anime, where all that’s left are these more obscure, unknown quantities. Votoms is one of those; far from perfect, yet written well enough to be remembered.

10 replies on “The scent of flames: Armored Trooper Votoms”

Much appreciated to read about an oscure classic like this!
Love your blog 🙂

Whow! ive actually seen this series, i loved it 🙂

The characters are good, but the story doesnt make any kind of sense. Ending plainly sucks, the series just ends without explaining ANYTHING, and what it DOES explain seems really forced. You cant seriously believe that they actually thought they would 100% make a sequel.

What I loved about VOTOMs (other than the purest real robots this side of Patlabor) was that it felt like a classic 1940’s sci-fi book, in vein of Asimov’s Foundation.

At the end of the day I’d also file Votoms under ‘far from perfect, yet written well enough to be remembered’, but since it hit the spot so well for me I’m always glad to hear that someone else enjoyed it.
Chirico’s comment to Ypsilon is rather interesting. I suppose the ‘perfect’ soldier might really be someone who’d seen through the glory of combat. There’s a lot to say about the small things in this show, as your example of Chirico’s scrap-metal chair demonstrates.

I feel the same way about walking that tight rope between accessibility and obscurity. But in a way, I think that is why people come to my blog, and I’m sure people don’t come to your blog for yet another opinion on K-on! (although I guess, titles like this are bit TOO obscure haha…). I’m not really a mecha fan, and the screenshots aren’t particularly appealing, but I will keep this under my ‘to watch if I feel like a old mecha show Bateszi recommended’-list.

I love Votoms. It is a shame so many people dismiss older anime because it is “ugly” or has “bad animation” or whatever silly reasons they have. They just don’t make them like this anymore.

@Classic Maiden:
Thanks. This took a few days to write, so it’s great to know you seem to be liking my blog!
@anonymous:
Always nice to hear from another Votoms fan!
@karry:
We’ll see. As of this evening, I’m up to episode 41 and hopefully it isn’t as frustrating as you make it sound!
@Knurek:
Oh, great, you’ve just gone and started me on another big read! I just had a quick look at the Wikipedia page for the Foundation series and it sounds so… epic, yet confusing at the same time; I’ve no idea which book to start with, so your advice would be more than welcome.
@IKnight:
Indeed, this was a case of trying to balance an objective critique with another, more ‘fanboy’-esque tone, if just because I’m well aware a lot of people will probably look at this and just think ‘ugly animation, real robot, slow’ and be turned off, but at the same time, when you do finally find someone capable of enjoying it, it’s almost like finding a kindred spirit; I really think Votoms is that divisive.
As for the ‘small things’ (like Knurek alluded to above), the structure of Votoms has a really novelistic feeling. Everything seems carefully crafted and placed for a specific reason. May be that’s just Ryosuke Takahashi’s style? I get a similar feeling from Layzner.
@gaguri:
Oh, certainly. Perhaps it’s simply a case of developing the skill to craft a post that’s both obscure and accessible at the same time? I guess that’s why some of this ‘review’ borders on ‘meta-blogging’; it’s just me trying to remain accessible while talking about some obscure, old mecha anime!
Also, your refined taste in anime (as well as your command of English) was the first thing that really struck me about your blog, and is why I felt like I had to link it; anime fans into series like Kaiba, Casshern Sins and LoGH are so few and far between! 🙂
@kopl:
It’s something that frequently gets under my skin, kopl. The refusal of people to try new things and their inability to accept anything that looks slightly different will frustrate me forever! Alas, this just means that when you finally do meet people with broader tastes in anime, the connection feels that much stronger!

Chirico Cuvie’s parting thought regarding the woman that tried to kill him on Susna encapsulate him completely:
“I want to tell her that I didn’t kill her family, that my unit arrived to this world a week later. But none of that matter, because I was doing the same thing elsewhere”.

I actually looked at two episodes of this, but I couldn’t really get into it. Part of it may have been that I wasn’t able to fully grasp everything (I only had the RAW.) Going from your review and the comments above, it seems a lot more literary than I realized, though also a bit confused.
I do think it’s great that you reviewed the series, though – maybe I’ll get back into it if I can find a translation!