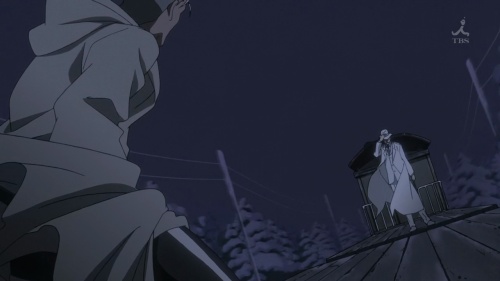 Choosing the best anime of 2009 is no contest for me, Fullmetal Alchemist: Brotherhood wins it hands down every time, but we’re past any stabs I could make at being objective about this, the show has everything I look for in anime, yet still manages to keep getting better, so much so that earlier today I even started comparing it to Legend of the Galactic Heroes! I mean, what the hell?! All this was again brought to the surface by episodes 32 and 33.
Firstly there is the unending expansion of mangaka Hiromu Arakawa‘s story into newer countries and climates. She achieves the sheer sense of distance usually exclusive to great fantasy, of creating a living, breathing world, which is why I’m now comparing it to Legend of the Galactic Heroes, because even though it’s now over half way through, FMA continues to introduce exciting new characters into the mix. 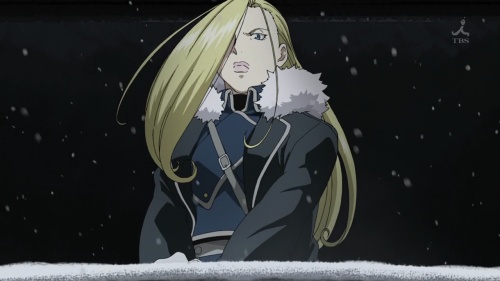 The latest is the “Ice Queen” Olivier Milla Armstrong, older sister of Alex Louis Armstrong; she guards the snowy border between her country (Amestris) and the mysterious Drachma, her base carved amidst a freezing mountain range, the stone walls as imposing as her cold glare.
I need a map; Amestris, Drachma, Ishbal and Xing; four different countries, cultures and landscapes. There is no end to this world, only distance to be covered and wonders to be found. 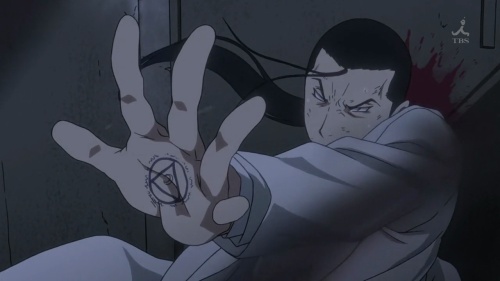 Secondly there is the pure spectacle of watching something so consistently dramatic and exciting. In episode 33, we see a battle fought out on a moving train between Scar and Zolf J. Kimbley. Suddenly, nostalgia; I felt like I was watching Baccano! all over again, with Kimbley’s smart white suit and insane bloodlust reminiscent of Ladd Russo‘s own unique brand of enthusiasm, all cramped within a train racing through the dark countryside.
Kimbley removes his hat and off it flies, carried by the wind into the forest’s snowy night. The wooden carriages are torn apart as the two men trade blows, yet it ends bluntly when Scar picks up a metal-pipe and literally spears it through Kimbley’s abdomen. The pain felt, not to mention blood lost, is a reminder that FMA remains as violent as ever.
The total rush of adrenaline one gets from a scene as beautifully animated as this, combined with Arakawa‘s world building, is not ephemeral; this is a show that wrenches my heart out of place, time and time again.