(dengar is the newest addition to this blog, which brings our numbers up to 3 and closes May’s recruitment drive in fine fashion. He’s based in Boston (United States) and with Celeste in Vancouver (Canada) and myself in Cambridge (England,) we’re an international bunch, which is sure to prove interesting. Anyway, it’s now time to let the dust settle on this new format, so, please enjoy dengar’s first post, and, here’s the future! Thanks for sticking with us until now!)
How would you like to be thought of as a weird, socially inept person who has an unhealthy obsession with imaginary characters? While harsh, these unfortunate stereotypes of otaku are certainly widespread.  After hearing the same generalizations again and again we expect our friends and family to mischaracterize an otaku as someone obsessed with watching cartoons, playing dress-up, and reading comics. Understandably many anime fans choose to stay “in the closest,” and hide their interest.

Genshiken redux
Genshiken is about how otaku come to terms with themselves and the real world, all while forming a sense of identity.  The first season primarily followed Kanji Sasahara, a freshman at Shiiou University, as he comes to grips with being an otaku.  Along the way, the show satirizes popular anime and otaku culture.  In a stroke of genius, it even features a faux show Kujibiki Unbalance which was popular enough to get its own spin-off.
Season two continues where the first season left off; we follow the members of genshiken as they float, and sometimes blunder, through the trials and tribulations of student life.  Not surprisingly, the lives of these socially awkward characters provide easy fodder for storylines. Whereas season one largely dealt with what happens at school, season two expands beyond into the “real world” outside the academy.  We see the members get into relationships, work through knockout fights, and struggle with the job hunt.
I thought Genshiken was interesting because it helped me reflect on what it means to be an otaku and I could definitely see pieces of myself in each character. For example, in season one there is a situation where Sasahara initially walks past the genshiken group table at the club fair and ignores the club’s members because he is scarred of being associated with the group. There are definitely times when I have hid (and continue to hide) my interest in anime from my “normal” friends until I get to know them fairly well.  At other times the characters in Genshiken are so inept at everyday life that I had difficultly identifying with them and their problems. At times I wished I could strangle them. 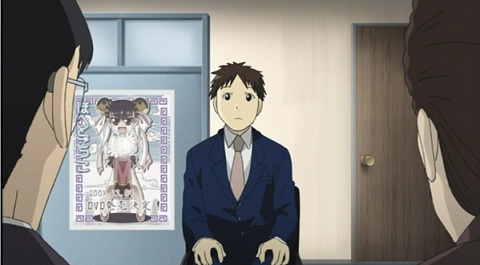 It would have been easy to relay the message that we should all be comfortable enough in our own skins to publically express our love of anime. But I don’t think that was the show’s meaning.  Once you get past the satire and comedic moments, I think Genshiken was really about presenting an accurate portrayal of otaku. After watching the show, the viewer can decide if he wants to change his behavior.  If the goal is to push otaku to be completely comfortable with their passion, well, I admit I am still not at that point.  For better or worse, I think other people are too judgmental for me to be entirely comfortable “coming out” as an anime fan.  Still, Genshiken offers a balance, and it inspires me to buck the stereotype that otaku give up when they encounter problems.  It’s sort of like children swearing never to stop playing video games… as I grow up, I don’t want to lose the things that were important to me as a kid.  But I also want to address my shortcomings, have relationships, get a job, and (eventually) be an adult.  I may not accomplish everything I want, but I won’t let the fear of failure deter me from trying in the first place.

4 replies on “The secret life of the otaku”

One of the opening scenes of the J-drama Orange Days has a college student standing at the train stop. On one side there’s a group of high school kids goofing off, and on the other there’s a man in a suit bowing and apologizing into a cell phone. Personally, I like the xkcd approach (http://xkcd.com/150/) – we are the adults now, so we get to decide what being an adult means. The video games, anime, magic cards, or whatever it is that we were encouraged to spurn is ours to let go of or hold on to.
I think Genshiken II does a good job of saying hey, being an otaku is a valid lifestyle for adults. Some of it is more obvious, like when the otaku-hating girlfriend defends the worth of the club to the school council (that was in #2, right?), or when romance sparks in part through a mutual interest in cosplay. It’s an interesting comparison to some of the other anime that looks at anime fans. Sometimes the otaku are cute (konata in lucky star), sometimes they are creepy (welcome to nhk), and in Genshiken they are simply people becoming adults.
Thanks for the post! Welcome to bateszi!

I do like the xkcd approach as well, though I wonder if we are really free to pursue it. The internet makes it very difficult to compartmentalize pieces of your life, everything is just a google search away.

The first time I told a japanese friend that I might be a tad bit otaku I could feel him moonwalking his way out of the room :)) But I will always say it loud and proud. To me it’s all about the selections you make. I would probably not make public that I have 50 dvds of moe ( which I don’t ) but I will always mix in a bit of anime references in a conversation centered on the spirit of the age, contemporary culture and such. Heck, I even put this in my cv. The otakus in Ghenshiken are pure breeds though. I wonder if there are levels of otakuness or you either are, or not. And if you’re not as hardcore as those characters…what are you? What’s the proper word for a person who mouthwaters watching Studio 4c and wears silly Naruto t’shirts but doesn’t jerk of to Elfen Lied? “Fan” is so generic 🙁
I agree that G. is “about presenting an accurate portrayal of otaku”because it doesn’t focus on the extreme negative and it’s actually quite hilarious. I watched with kindred spirits and we laughed out loud maaaany times even though it was like “ou man…this is so you!” “So true…I do act like an idiot in those situations!”
dengar I hope you do get over “comming out” anxiety. You’ll always be in good company here on the interwebs 🙂 I look forward to more articles from you
Best

Thanks Laura! I’m definitely getting over those anxieties with most people I know (or at least well enough for me to share my work on blog on gchat and facebook), but I still don’t reveal my interest professionally, no CV mention quite yet…
I can totally relate to your frustration about the term otaku itself. I certaintly don’t consider myself at the Genshiken level, even though I enjoy anime in mostly the same way that they do. Still, my friends (both those that enjoy anime and those that don’t) would probably call me an otaku. So I guess I am comfortable with the term, even though I feel it doesn’t adequately describe me.