This is a show about football (out of respect to Bateszi I’ll avoid using the word soccer…). The featured team, East Tokyo United (ETU), is dysfunctional. ETU’s fans are running away, the team keeps losing managers and players and worst of all, they just can’t win. At this point in the summary, anyone who has watched a feel-good sports movie knows the premise: a team of misfits need to come together and miraculously win the J-League!
So, how does this show overcome its predictable plot? Personally, I really enjoyed watching Giant Killing because it showcases the most exciting parts of each soccer game while at the same time making me want to root for ETU. Less is more when it came to the games in this show, the animators understood that if I wanted to watch a 90 minute game, I would just turn on the real thing. The show focuses on the juicy parts of each game: the goals and the moments where the momentum shifts.


What the show still needs to do in order to impress me is to develop each team member on ETU. To start with, the show needs to differentiate the players on the team. Out of the 18 people on the team, only about 5 are distinct enough for me to know who they are. The show also disappointed me when they portrayed one of the opposing players as borderline insane. That tactic works well for enemies in most anime but just isn’t believable in the context of professional football. 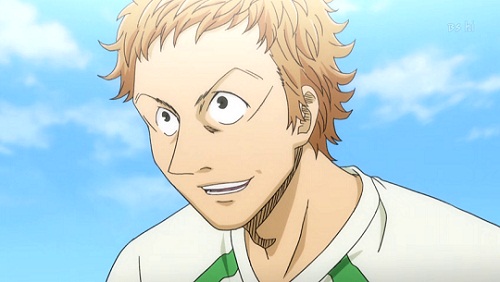 Even with its problems, I am still drawn to this show’s theme which I think goes beyond merely winning a sport’s game. The main lesson of this anime is that each person has a giant killing inside them, an ability to take on the best and come out on top. Maybe I’m biased by the recent World Cup, but it just seems like a really great time to watch a football anime.

5 replies on “Can you make a giant killing happen inside of you?”

Bateszi touched on this series not long ago, so forgive me if I repeat things I said before.
I dropped the series after ETU defeats the team with the Brazilians. ETU finally gets a win, Tsubaki (is that the name?) gets a goal and a moment of zen. For once, everyone in the cast was happy. It felt like a good time to walk away. I understand that soccer is a competitive sport and you must fight for spots, struggle and so on to achieve and win, that we each have giants to kill, but rarely in this show did anyone (up to where I dropped it) seem to be enjoying the fight. It was all accusations and perceived vendettas. Those Brazilians, crass racial stereotypes that they were, at least reminded us that soccer is supposed to be beautiful, that we should enjoy it. I wasn’t getting much of that from ETU, even from Tatsumi.

I agree with you that the cast doesn’t seem to be enjoying itself, they seem more amazed by their victories than anything. I think that’s okay for the beginning part of the show given how losing was ingrained into the players’ minds. The problem is they took about half the series to get to this point.
I think they should have reached this game faster in order to leave more time to tell more interesting stories later.

It’s really difficult to portray football in visual media. There’s been a few tries at it in the UK, but it’s never worked. Either the actors are awful at playing the sport, or the plot’s just this unbelievable Rocky esque “striker scores in the last minute of extra time to win the Cup!” nonsense, but I think Giant Killing works because it’s about more than (as you say) “merely winning,” it’s about determination, tactics and the culture that surrounds the sport. Basically, I’m really liking it so far.
For another football (true) story done well in film, check out “The Damned United”, which came out last year. The acting is solid, but more importantly, it really captures the feeling of football over here and what it means to people.

I’m pretty addicted at this point but I do think the series fails because it can’t extend it’s focus beyond the field. The show does include a storyline about the old ETU fans rekindling their passion but that part is just uninteresting.
What bugs me is that football stories can be about more than what happens on the field. I mean, Bend It Like Beckham got 3 1/2 stars and a very positive review from Roger Ebert (http://rogerebert.suntimes.com/apps/pbcs.dll/article?AID=/20030312/REVIEWS/303120301). Giant Killing ends up feeling one dimensional because the only (interesting) storyline is the one about the games.

This is one of those cases where I disagree with Ebert and say the movie wasn’t as good, although there’s my bias against hollywood sensibilities in general.
Shaolin Soccer is probably the most entertaining soccer-related cinema I’ve wathced yet.